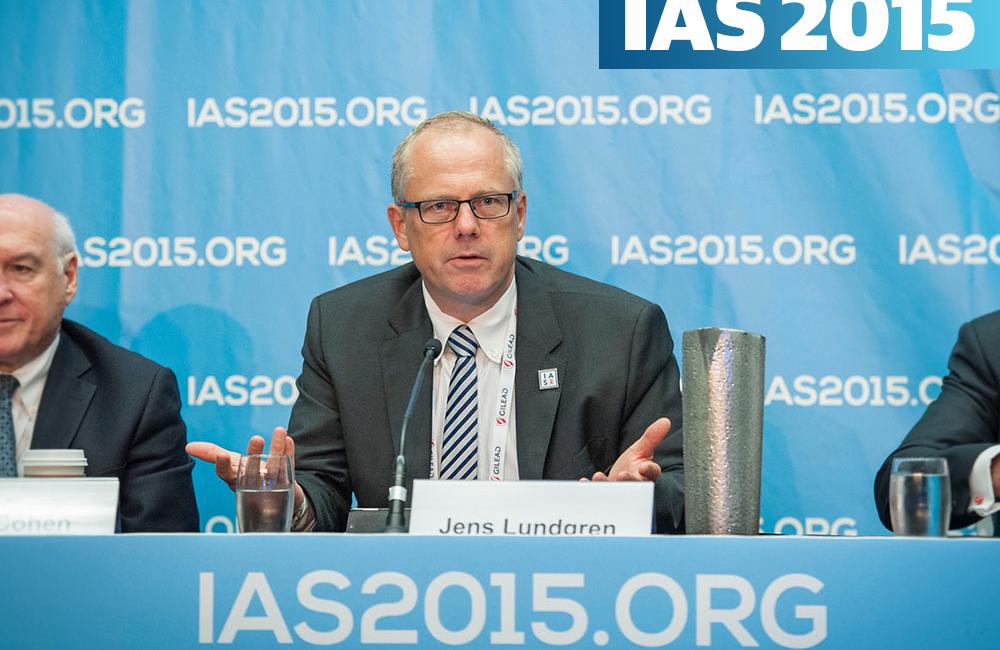 People who start antiretroviral therapy (ART) immediately after HIV diagnosis, while their CD4 cell count is still high, rather than waiting until it falls below 350 cells/mm3 have a significantly lower risk of illness and death, according to long-awaited findings from the START trial. The final study results were presented on Monday at the Eighth International AIDS Society Conference (IAS 2015) in Vancouver, Canada, and published simultaneously in the July 20 advance edition of the New England Journal of Medicine.

Professor Jens Lundgren of the University of Copenhagen reported that 1.8% of study participants in the immediate treatment group experienced a combined endpoint of serious AIDS-related events, serious non-AIDS events and death, compared with 4.1% in the deferred therapy group – a 57% reduction. The most common events in both arms were tuberculosis (TB) and cancer.

These findings suggest that HIV causes persistent immune system damage soon after infection, and "clearly indicate that ART should be provided for everyone regardless of CD4 count," Lundgren told aidsmap.com.

[The findings] "clearly indicate that ART should be provided for everyone regardless of CD4 count." Jens Lundgren

It is well known that starting ART before CD4 cell counts fall to low levels dramatically reduces the frequency of opportunistic illness and improves survival. A growing body of evidence shows that earlier treatment is associated with decreased disease progression and death, as well as minimising the risk of onward transmission of HIV.

But very early HIV treatment can have drawbacks, too, including longer exposure to potentially toxic therapy. In addition, some early treatment critics have expressed concern that people with HIV could be pressured to start treatment before they are ready, to benefit others rather than their own health

Investigators with the INSIGHT START Study Group designed the Strategic Timing of Antiretroviral Treatment trial to shed more light on the optimal timing of HIV therapy, especially for people with CD4 cell counts in the normal range. The study began wide enrolment in March 2011.

START participants entered the trial with a CD4 count above 500 cells/mm3. They were randomly assigned to either start treatment immediately or to delay therapy until their CD4 count fell below 350 cells/mm3 or they developed symptoms of AIDS. They used a variety of antiretroviral regimens selected by study clinicians.

The study enrolled 4685 adults living with HIV in 35 countries worldwide, including just over half from low- and middle-income countries. Nearly three-quarters were men and the average age was 36 years. About 45% were white, 30% were black, 14% were Hispanic/Latino and 8% were Asian. Just over half were men who have sex with men.

The START Data Safety and Monitoring Board (DSMB) stopped the randomised portion of the trial ahead of schedule in May 2015 when it determined that there was enough evidence to show a significant benefit of immediate treatment. All remaining untreated participants were offered the option to start therapy. They will continue to be followed for long-term outcomes, and a set of sub-studies is looking at specific manifestations including neurological function, artery function, bone density and liver disease.

"The HIV research community needs to have solid evidence for making global recommendations on treatment..now we have evidence that aligns individual benefit and prevention benefit without harm." Jens Lundgren

At the time the study was halted, participants had been followed for an average of three years, accruing a total of 14,060 person-years of follow-up time. Most (94%) in the immediate arm were on still on treatment and 28% in the deferred arm had started. Retention in START was ‘excellent’ according the researchers, and adherence was good once treatment was initiated.

People in the deferred group started treatment in a median of three years – less than the predicted four years. Nearly a third started ART with a CD4 count of 250-350 cells/mm3, but 8% did not do so until they fell below 250 cells/mm3. The rest did so at higher levels than the trial's treatment-initiation threshold, including 8% who started with more than 750 cells/mm3. Over the course of follow-up, people in the deferred therapy group had CD4 counts that were 194 cells/mm3 lower, on average, than those who started treatment immediately.

Looking at the types of events, TB was the most common event in both the immediate and deferred treatment arms (6 vs 20 cases, respectively). Opportunistic conditions including lymphoma (3 vs 10 cases), KS (1 vs 11 cases) and Pneumocystis pneumonia (1 vs 5 cases) occurred much more often in the delayed treatment group. This was true even though most people who delayed treatment spent most of their time in the study with a CD4 count well above the traditional 'danger zone' below 200 or 350 cells/mm3.

In both arms, the leading cause of death was accidents, violence or suicide (four in the immediate and six in the deferred arm). There was one death due to active HIV/AIDS in the immediate group compared with four in the deferred group. But other causes of death were scattered between the two groups with very small numbers and "no clear pattern", according to Lundgren.

Serious cardiovascular events occurred with similar frequency in the immediate and deferred groups (12 vs 14 cases). There were three cardiovascular deaths in the early ART arm compared with one in the delayed group, but these numbers are too small to draw conclusions. At any rate, Lundgren said, there is no evidence from this study to demonstrate any benefits of early treatment for cardiovascular disease, but this also cannot be ruled out.

Finally, the researchers looked at adverse events in the study, assessed in both ART-treated and untreated participants. Separately, rates of serious (grade 4) adverse events, unscheduled hospitalisations and deaths from any cause did not differ significantly in the immediate and deferred ART arms. However, when these events were combined there was a significant advantage in the early treatment group (HR 0.82; p = 0.01). The only specific adverse event with a notable difference was bacterial infections, which were significantly more common in the delayed treatment arm.

Despite the long-standing concerns about early ART leading to added side-effects, Lundgren said there was "no apparent increased toxicity", seen in this study.

START participants who started immediate treatment saw similar benefits regardless of sex, age, race/ethnicity or geographic region. Importantly, the benefits of early ART were comparable in wealthy and low- or middle-income countries.

However, the study team acknowledged that START participants were younger than expected and experienced fewer overall events than originally predicted. Further research is needed on complications among people ageing with HIV.

As noted, most people in both the immediate and deferred treatment arms spent most of their time in the study with a CD4 count over 500 cells/mm3, and more than two thirds of the AIDS and non-AIDS events occurred at this level.

Based on these findings, Lundgren suggested that we cannot rely on CD4 count to fully capture immune deficiencies in early HIV infection. "This trial demonstrates that even in people with high CD4s, there's a hole in the immune system if you're HIV-positive," he explained. ART is able to fill those gaps at least partially, but even fully suppresses therapy may not be able to completely reverse immune damage once it's done. Lundgren added that it will be important to develop new types of treatment beyond antiretrovirals aimed at restoring lost immune function.

When the START DSMB halted the trial prematurely, the early findings were provided to the World Health Organization (WHO) panel working on updated global HIV treatment guidelines. WHO announced this week that its forthcoming guidelines will recommend treatment for all, regardless of CD4 count. US guidelines adopted universal HIV treatment in 2012 and the British HIV Association did so in its new draft guidelines, issued in June after the release of the preliminary START findings.

"The HIV research community needs to have solid evidence for making global recommendations on treatment," Lundgren told aidsmap.com. "We want to build an evidence base and not rush it. But now we have evidence that aligns individual benefit and prevention benefit without harm. I'm very happy we were able to provide that evidence and that WHO is responding."

"IAS 2015 will be remembered as the definitive moment when the world agreed earlier initiation of treatment is the best way to preserve the health of people living with HIV, and one of the best tools we have to slow HIV transmission to others," said conference co-chair Julio Montaner of the British Columbia Centre for Excellence in HIV/AIDS. "The new data presented today will inform HIV treatment guidelines worldwide, and inspire governments, funders and health systems to act to save millions more lives."

"We have to translate these findings into programs as quickly as possible," concurred US Global AIDS Coordinator Deborah Birx, speaking on a panel about START's implications after Lundgren presented the findings. "All of us have a moral obligation now."