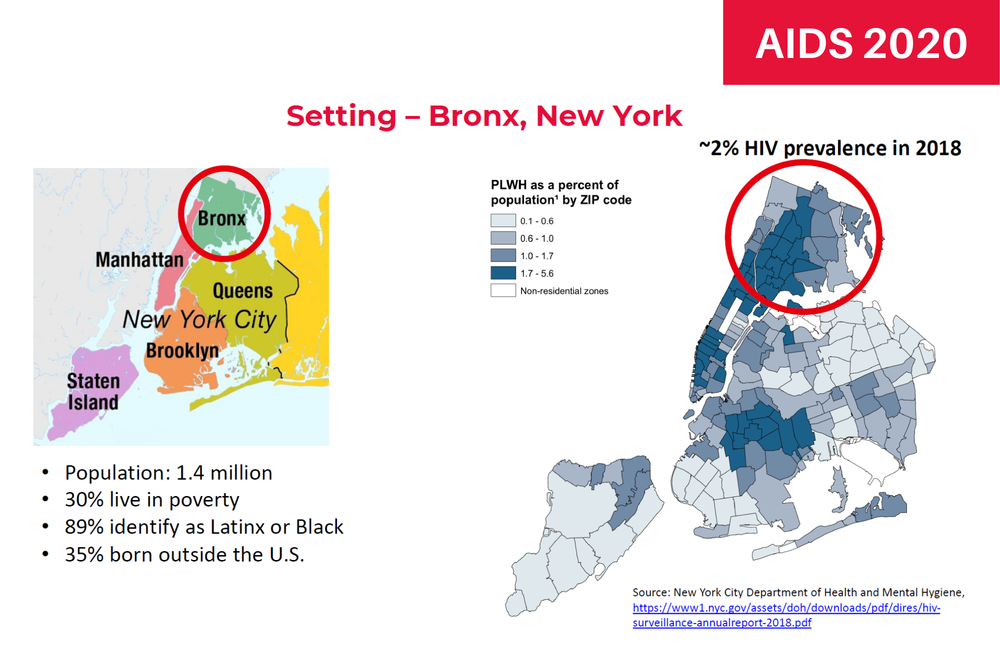 People living with HIV spent a similar amount of time in hospital as HIV-negative COVID-19 patients and had a comparable death rate during the height of the outbreak in New York City, but they were more likely to be put on ventilators, according to a study presented at the 23rd International AIDS Conference (AIDS 2020: Virtual) today.

A related study showed that people with HIV had higher levels of inflammation, indicating that they are capable of mounting a strong inflammatory response to the new coronavirus and remain at risk for severe COVID-19 despite taking antiretroviral therapy (ART).

Studies have generally found that people with HIV are no more likely to contract the coronavirus (known as SARS-CoV-2) than their HIV-negative counterparts, and they generally do not develop more severe illness or have a higher risk of death. An exception is a study from South Africa that did see increased COVID-19 mortality among HIV-positive people.

Given that people with HIV appear to have a similar risk of contracting SARS-CoV-2 and developing severe illness despite having some degree of immune suppression, some experts and advocates have suggested that antiretrovirals may have a protective effect. However, studies of the effects of HIV medications on COVID-19 outcomes have so far yielded mixed results.

COVID-19 outcomes in the Bronx

Dr Viraj Patel of Albert Einstein College of Medicine and Montefiore Health System in the Bronx, New York conducted a retrospective cohort study of people with and without HIV who tested PCR positive for SARS-CoV-2 when they were hospitalised between 10 March and 11 May 2020. Montefiore is the largest provider of HIV care in the Bronx, serving more than 4000 people with HIV at four hospitals and 21 primary care clinics.

Located north of Brooklyn and across the river from Manhattan, the Bronx has a largely African-American and Latino population. Over a third of residents were born outside the US and 30% live in poverty – among the highest rates in the US. The Bronx was one of the epicentres of the New York City COVID-19 outbreak, which was the worst in the US and among the worst in the world, with more than 300 hospitalisations a day at the peak in early April.

"The likelihood of intubation and death in hospital was higher for people with viral suppression compared to those with uncontrolled HIV."

The researchers looked at length of hospital stays, intubation and mechanical ventilation for respiratory support, development of acute kidney injury and mortality. The analysis did not account for the use of COVID-19 treatments such as remdesivir or steroids.

The analysis included 100 HIV-positive and 4513 HIV-negative people. Just over half were men and the median ages were 62 and 65 years, respectively. Approximately 40% were black, a similar proportion were Latino and 6% were white. Most were on Medicaid (coverage for people with low income) or Medicare (coverage for older people), with only about 15% having private health insurance.

Among the people living with HIV, 94% had been prescribed ART and 81% had a suppressed viral load (below 40 copies/ml). However, about one in five had a CD4 count below 200 cells/mm3, reflecting advanced immune suppression.

The researchers found that most outcomes did not differ between the HIV-positive and HIV-negative patients, including length of stay in hospital (five days in both groups), rates of acute kidney injury or likelihood of death while hospitalised (22% vs 24%, respectively).

However, people with HIV did have a higher rate of intubation and mechanical ventilation – 21% vs 14%, which worked out to about a 50% greater risk – but the difference fell just short of the threshold for statistical significance.

Interestingly, the study found that the likelihood of intubation and death in hospital was higher for people with viral suppression compared to those with uncontrolled HIV. In fact, no one with unsuppressed HIV required intubation or died. People with detectable HIV viral load spent slightly longer in hospital (seven vs five days). But this group only included 15 people, so it is difficult to draw firm conclusions.

In another unexpected finding, having a higher CD4 count before hospitalisation was associated with a higher likelihood of intubation, but no differences in length of stay or risk of death were seen.

"The observation of no intubations or deaths among people living with HIV without viral suppression warrants further examination," Patel and colleagues concluded.

In a separate study, Dr John Hsi-en Ho of the Icahn School of Medicine at Mount Sinai in New York City looked at clinical and immunological characteristics among HIV-positive people with COVID-19.

HIV is characterised by chronic inflammation and varying degrees of immune dysfunction even in people on effective ART, Ho noted as background. COVID-19, too, is associated with abnormal immune function, including low lymphocyte levels.

This retrospective analysis included medical chart data from 93 people with HIV seen at five emergency departments in New York between 2 March and 15 April 2020 who tested PCR positive for SARS-CoV-2.

"People with HIV are capable of mounting a strong inflammatory response to the new coronavirus and remain at risk for severe COVID-19."

Here, 72% of the cohort members were men, 41% were black, 31% were Latino, 23% were white and the median age was 58 years. This study had no HIV-negative control group for comparison.

Participants had a CD4 count of 554 cells/mm3 prior to COVID-19 diagnosis and a nadir or lowest-ever level of 320 cells/mm3. Almost all were on ART, including 70% who used tenofovir disoproxil fumarate or tenofovir alafenamide and 14% who used the protease inhibitors atazanavir (Reyataz), darunavir (Prezista) or lopinavir/ritonavir (Kaletra) – drugs that in some studies have shown activity against SARS-CoV-2. More than 80% had an undetectable viral load (below 50 copies/ml).

Upon presentation at the hospital, HIV-positive people with COVID-19 had low total lymphocyte levels and decreased CD4 T cell counts. In contrast, levels of various inflammatory markers were elevated. C-reactive protein (CRP), fibrinogen and D-dimer (a blood clotting marker) were all above the upper limit of normal.

The participants also had much higher than normal levels of the cytokines interleukin 6 (IL-6), IL-8 and tumour necrosis factor alfa, but not IL 1b. Excessive cytokine levels – known as a cytokine storm – is one of the hallmarks of severe COVID-19 illness that leads to lung and other organ damage.

However, there was no difference according to pre-diagnosis, current or nadir CD4 counts, whether or not they had undetectable HIV, age, sex or body mass index. Other studies of HIV-negative populations have found that older age, male sex, obesity and other co-morbidities are associated with more severe COVID-19 and higher mortality.

Ho noted that coronavirus testing was limited during this period and tended to be reserved for sicker patients, so this group is not representative of all HIV-positive people with COVID-19. Further, the proportion of people with HIV suppression was high, so it was not possible to do an informative comparison between those with and without detectable viral load.