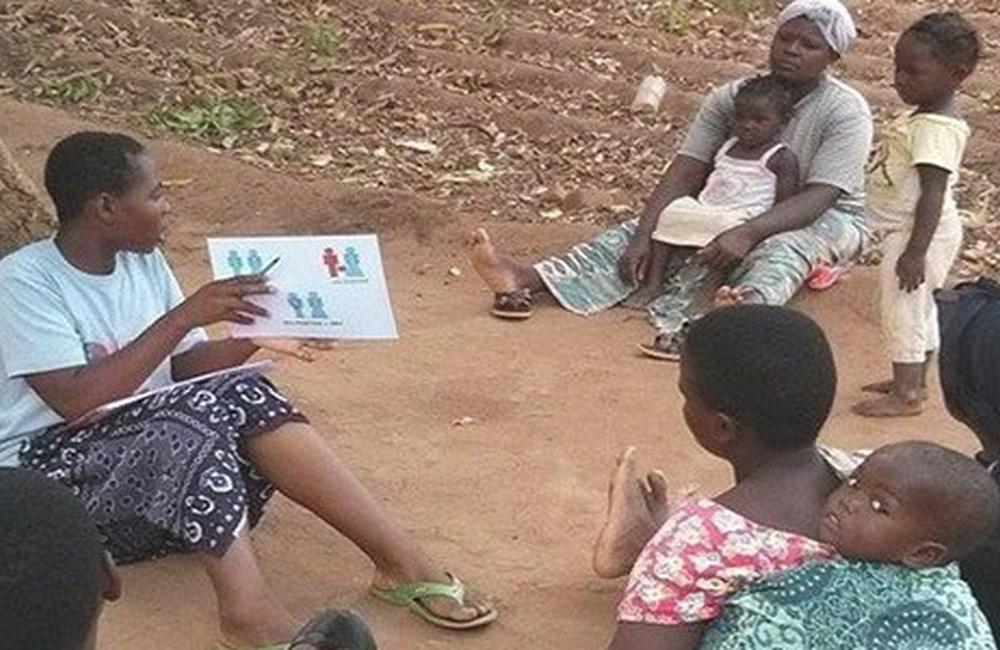 An educator using the study infographic in the field. Image supplied by Laura Derksen.
This article is more than 8 years old. Click here for more recent articles on this topic

A large randomised trial of communities in rural Malawi shows that a single community meeting providing information on how antiretroviral therapy makes people less infectious can have a significant impact both on HIV stigma and HIV testing. The results were presented to the Eighth International AIDS Society Conference on HIV Pathogenesis, Treatment and Prevention (IAS 2015) in Vancouver this week.

In the Zomba district of Malawi, where one in seven adults has HIV, community health education meetings were held in 122 villages.

Half the villages were randomised to receive the control meeting, in which community health educators described the health benefits of HIV treatment for the individual: lengthening life expectancy and preventing the symptoms of AIDS. The importance of adherence and the free local provision of HIV treatment were covered. Condom use and abstinence were described as good methods of HIV prevention.

The meetings in the other villages covered those issues but also described the impact of HIV treatment on infectiousness, using infographics to explain the HPTN 052 study, which found that early HIV treatment reduces HIV transmissions by 96%. The community educators emphasised that this reduction in HIV risk was based on correct adherence to HIV treatment as prescribed.

Whereas the individual health benefits were already familiar to most participants, few had been aware of the transmission benefit before the meeting.

Around two-thirds of villagers attended the meetings, which lasted around 45 minutes. Women were more likely to attend than men.

Five months later, village members who had taken part in the meetings were surveyed. The interviewers did not know what had been covered in the community education meetings and were blinded to the split between intervention and control villages.

A series of factual questions about HIV transmission showed that those in intervention villages had much better understanding of the link between HIV treatment and transmission. Levels of knowledge about other HIV topics did not differ.

Stigmatising attitudes were less frequently reported by those who had learnt about treatment as prevention: 72% of people in intervention villages said that they would prefer a sexual partner who is HIV-positive and taking HIV treatment over one who has never been tested for HIV. In control villages, the figure was 52%.

Further, 46% of people in intervention villages said that they thought a person receiving treatment for HIV would be able to find a new partner or spouse, compared to 33% in control villages. These differences were statistically significant after adjustment for confounding factors.

The researchers hypothesised that reductions in stigma would lead to increases in the number of people testing for HIV. Routinely collected data from 18 local health facilities were examined, noting the place of residence of people who tested for HIV in the three months before and after the health education meetings.

In the intervention villages, 2.6% tested for HIV in the three months following the meetings, compared to 1.6% in the control villages. That amounts to a 60% relative increase in HIV testing and was statistically significant after adjusting for confounding factors.

Testing increased in both men and women. The changes in HIV testing behaviour appeared to be based on perceptions of the community’s beliefs about HIV treatment, and not an individual’s personal beliefs. Whereas people often take HIV tests at some distance from their home (so that they are not observed doing so), there appeared to be an increase in people testing at nearby health facilities.

The results suggest that a community-level information campaign on the prevention benefit of HIV treatment is an inexpensive way to reduce stigma and increase HIV testing. They also show the value of giving precise, accurate information about the risk of HIV transmission.

In contrast, public health campaigns which give the impression that HIV transmission happens relatively frequently (perhaps in order to encourage condom use) may have unintended consequences: exacerbating stigma and discouraging HIV testing.

U=U—undetectable = untransmittable—is a powerful public health intervention. However, Thailand has also conceived of this strategy as a tool to combat stigma and discrimination in healthcare settings and for the wider public.
UNAIDS Asia-Pacific
12 Dec 22
Global health targets

The partnership will drive progress on the historic 10-10-10 HIV targets, which call for transformative action to reduce stigma and discrimination and remove punitive laws and policies impacting people living with HIV and other key populations.
United Nations Development Programme
5 Dec 22
UK health services

The report reveals progress toward easing HIV stigma, through increasing knowledge, comfort, and greater understanding that HIV can be treated to the point of being undetectable and therefore untransmittable (U=U) and the importance of PrEP for prevention.
GLAAD
1 Dec 22
HIV in the arts & media