PrEP appears safe for use in conception, but may not be necessary if partner is taking treatment 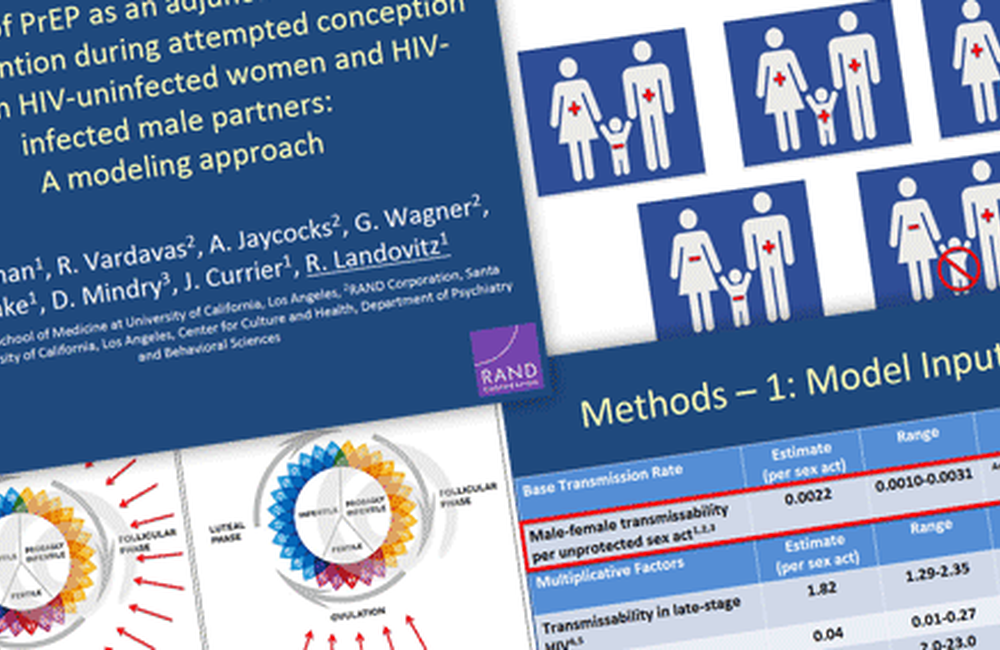 Images from the presentation of Raphael Landovitz.
This article is more than 8 years old. Click here for more recent articles on this topic

HIV-negative women who wish to become pregnant with their male HIV-positive partner can be reassured that pre-exposure prophylaxis (PrEP) appears to be a safe option in terms of maternal and infant outcomes, according to data presented to the 7th International AIDS Society Conference on HIV Pathogenesis, Treatment and Prevention in Kuala Lumpur on Wednesday.

But modelling work presented to the conference on Tuesday suggested that if the woman’s partner is already taking HIV treatment and unprotected sex is limited to her fertile days, then the addition of PrEP may not afford any extra benefit.

For couples in which one partner has HIV and the other does not (‘serodiscordant’ couples), it is increasingly recognised that effective antiretroviral therapy dramatically reduces the risk of HIV transmission. Moreover, unprotected sex can be limited to the days around ovulation (when conception is most likely to occur) – a very cheap HIV prevention intervention.

Given the efficacy of pre-exposure prophylaxis in other situations, there has been discussion about the use of PrEP to assist conception, but little empirical data on its efficacy or safety, or recommendations on how to use it in practice.

The drugs which are used as PrEP, tenofovir and Truvada (tenofovir + FTC), are very widely used as antiretroviral therapy, including by pregnant women.  Previous research has suggested that they have a similar safety profile to other antiretroviral drugs; infants born to mothers who took Truvada during pregnancy have not had slower growth or raised rates of congenital anomalies.

Nonetheless, the balance of risk and benefit is different when a drug is used by an individual who does not otherwise need the drug to control an existing infection or to prevent vertical transmission.

Moreover, an understanding of the safety of these drugs during pregnancy is also essential for the wider roll-out of PrEP to heterosexual women – those at highest risk for HIV infection are often of an age in which pregnancy is common.

Safety data presented to the conference came from the Partners PrEP study, the large clinical trial among heterosexual serodiscordant couples in Kenya and Uganda, which showed that the tenofovir PrEP reduced the risk of infection by 62% and Truvada PrEP by 73%.

The trial was not set up to examine the safety of PrEP for conception or during pregnancy. In fact, as is common in clinical trials, pregnant women were specifically excluded – if a participant tested pregnant during a follow-up visit, she withdrew from the trial. Nonetheless, during each year of the study one in ten women became  pregnant and foetuses were exposed to the study drug during the first few weeks of pregnancy, the most important phase for the infant’s development.

The investigators estimate that foetuses may have been exposed to either tenofovir or Truvada for a maximum of six weeks each. Adherence was exceptionally good in this trial, so it is likely that infants truly were exposed to the study drugs.

Data was collected on 288 pregnancies, with follow-up visits each three months throughout the infant’s first year of life. Comparing women who received placebo, tenofovir or Truvada, the investigators found no statistically significant differences in terms of:

The researchers concluded that PrEP may offer a method for HIV-negative women with HIV-positive partners to reduce their risk of HIV infection during conception. They did however suggest that further study of PrEP taken throughout pregnancy would be valuable.

How much extra protection does PrEP give?

Antiretroviral therapy is increasingly recommended for people with HIV who are in serodiscordant couples – and especially so if a pregnancy is desired. Therefore, it is worth examining whether there is benefit in an HIV-negative woman taking antiretroviral drugs as PrEP in addition to her HIV-positive male partner taking similar drugs as treatment.

The investigators fed in a series of assumptions, derived from previous studies, of the transmission risk during both the first years of HIV infection and late-stage disease; the effectiveness of HIV treatment and PrEP in reducing transmissions; the impact of sexually transmitted infections; the probability of conception by age; the probability of successful delivery by age; and the number of unprotected sex acts to achieve successful conception.

For each assumption, a range of possible values was analysed.

The outcome of interest was that of an HIV-negative woman, whose partner has HIV, giving birth to a child whilst remaining HIV negative.

For couples who limited unprotected sex to fertile days, the modelling showed that taking either HIV treatment or PrEP was better than taking neither. But slightly better results were achieved with HIV treatment for the positive partner than with PrEP.

And most importantly, there was no statistically significant additional benefit in adding PrEP to HIV treatment, compared to taking HIV treatment alone.

In couples who had unprotected sex throughout the month, adding PrEP on top of HIV treatment did confer some benefit. But outcomes were always poorer for these couples, compared to couples who limited sex to fertile days.

The modelling also found that age played a very strong influence on the probability of the woman giving birth while remaining uninfected. Younger women needed to have unprotected intercourse on far fewer occasions to achieve a pregnancy.

The investigators are in the process of developing an online tool to help health professionals who are advising serodiscordant couples. The tool will calculate the probability of a specific patient having a child safely, depending on that couple’s particular circumstances and behaviours. Moreover, the model’s inputs and assumptions could be modified.

For now, they conclude that the results are reassuring – in that they suggest that couples can achieve the desired results without needing PrEP, as long as they limit unprotected sex to the time of ovulation, screen for and treat sexually transmitted infections, and the positive partner adheres to antiretroviral therapy.

Hoffman R et al. Benefits of PrEP as an adjunctive method of HIV prevention during attempted conception between HIV-uninfected women and HIV-infected male partners: a modeling approach. 7th International AIDS Society Conference on HIV Pathogenesis, Treatment and Prevention, Kuala Lumpur, abstract TUAC0104, 2013. View details of the conference session, Reproductive Health: What’s Hot, What’s Not?, in which this abstract was presented, including some presentation slides and webcasting, on the IAS conference website.