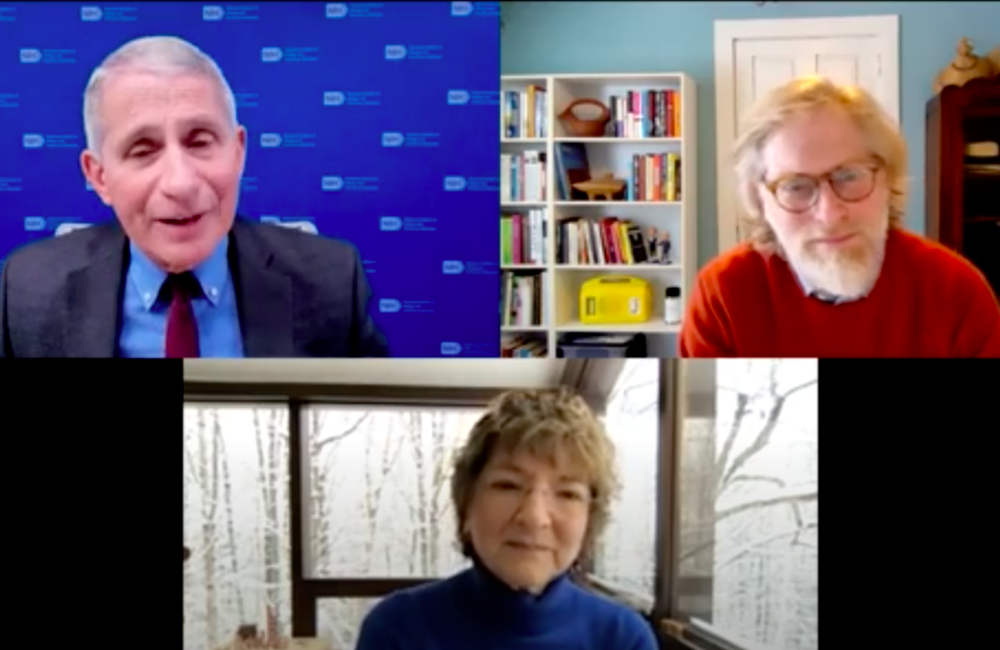 “The enormity of the problem is how I keep going,” Dr Anthony Fauci told a meeting of global health journalists yesterday. “I haven’t had a single day off since 20th January last year, but the necessity of dealing with the COVID epidemic is an anaesthetic against fatigue.”

Fauci, Director of the US National Institute of Allergy and Infectious Diseases (NIAID) since 1984, and someone who has been in the headlines for most of the last year, was speaking to a group of global health reporters in advance of the HIV Research for Prevention (R4P) conference. Originally scheduled for Cape Town last November, it is now happening virtually, and will take place over the last week of January and the first week of February.

Fauci entitled his talk 'Ending AIDS: Maintaining Progress through the COVID-19 Epidemic.' He started by using simple global figures to illustrate the differences between the two epidemics. During 40 years of the HIV epidemic, 76 million people have been infected; in one year of COVID-19, more people (91 million) have been infected. But whereas about 2% of those with COVID-19 have died, 43% of people with HIV have, predominantly from HIV-related disease.

A substance that is able to produce a response from the immune system.

I asked Fauci: when the COVID epidemic recedes, assuming vaccination programmes work, HIV will still be with us. What HIV research directions will we need to pick up on most urgently as COVID becomes a less urgent priority?

Fauci said he felt there were two research programmes that held the most promise for a significant reduction or end to the HIV epidemic. The first is injectable formulations of antiretrovirals. We already have formulations of cabotegravir and rilpivirine that can be injected every two months for treatment and have already had positive results from the HPTN 083 and HPTN 084 studies using the cabotegravir formulation as PrEP. Studies are being conducted into the use of the drug islatravir that could see it used as a once-a-month pill or as an annually inserted implant. And recently it was announced that the drug lenacapavir would be introduced into prevention studies as a twice-yearly subcutaneous injection.

The second promising programme is monoclonal antibodies, which are somewhere in between drugs and vaccines. Twice-yearly infusions of these could also be used as HIV treatments. However, referring back to COVID, he said that single monoclonal antibodies tended to neutralise a rather narrow variety of viral genotypes so might drive viral resistance more easily than drugs would. So they needed to be used in broadly effective combinations.

Fauci described these as the “relatively easy” solutions for HIV. A true vaccine for HIV, he said, would be more difficult, referring to the “disappointment” of the Uhambo study.

“A vaccine generally mimics the body’s natural immune reaction to a virus that usually results it being cleared,” he said. “This is why I knew – not hoped, knew – that we could develop a COVID vaccine, because in 98% of cases the immune system does clear the virus sooner or later. But in HIV, it doesn’t. So a vaccine has to elicit an immune response that’s better than nature, and that’s hard to do. “

Asked if the swift development of COVID vaccines held lessons for HIV vaccine development, he said that COVID vaccine research did not start from scratch in 2019. “The COVID-19 virus’s proper name is SARS-COV-2, and that’s because ten years ago we were faced with SARS-COV-1. They are similar viruses, and the COVID vaccines were based on a ten-year research platform.”

This, he said, was one answer he gave to vaccine sceptics who believe that the COVID vaccines could not have been developed without cutting corners.

He commented that HIV vaccine research had “absolutely” enabled the development of the COVID vaccines. It had been learned that the pre-fusion conformation of the HIV envelope protein – see the illustration in this article – was far more immunogenic than other conformations, and could be stabilised by inserting extra links into the molecule. Fauci said that a colleague at the National Institutes of Health, Dr Barney Graham, had managed to stabilise the spike protein of SARS-COV-2 using the same technique early last year and had produced an “exquisitely immunogenic” reaction that now served as the basis for the COVID vaccines.

The Pfizer and Moderna vaccines are based on the long-awaited technology of messenger RNA. “What goes around comes around, and I expect this to feed back into HIV vaccine development,” Fauci said. Indeed Moderna announced early results from animal studies at the AIDS 2020 conference in July that use this technology.

“The other way I deal with vaccine scepticism”, he said, “is to keep on telling people that it is not the federal government or the pharma companies that are pushing the research through. It is the science itself. Thirty to forty thousand people have taken part in COVID vaccine trials, their results have been validated by independent data and safety monitoring boards, and they have been licensed by transparent, independent drug regulators who are only there to evaluate the science.

“I do think, if you keep trying to take the politics out of it and explaining the science, people who have doubts will eventually, in the main, see that both the vaccines and the public health measures work. The thing that doesn’t work is to call them stupid.  And until 70-85% of the entire population are vaccinated, I don't think we will have herd immunity. So we need to encourage people to continue to wear masks and take the other public health measures."

Asked about the personal difference that the COVID epidemic had made to his life, Fauci made the comments above about the necessity of the work spurring on his energy.

“There is one thing I do every day that is nothing to do with science. I go for a run,” said Fauci, who turned 80 on Christmas Eve and had the first shot of his COVID vaccination two days before.

“The only difference now is that I used to do it in my lunch break, but now have to do it in the evening, because the day has been taken up with Zoom sessions and calls with the White House.” Calls, he says, that he only expects to intensify over the next few months.

The HIV R4P conference opens on Wednesday 27 January. See here for the programme.

21 December 2022
Telling people you have HIV

Peter Staley: " Dr. Fauci walked through the fire with us, and his friendships with AIDS activists deepened with time, bound by a shared trauma."
The New York Times
4 Jan 23
Activism & civil society

Our CEO Ian Green has received an OBE for services to charity and public health, while Lieutenant Commander Oliver Brown is awarded an MBE in recognition of his work to overturn the outdated ban on HIV positive people joining the UK’s military.
Terrence Higgins Trust
4 Jan 23
People & personal stories

These extracts from my diaries, which date from 1985 to 1988, offer glimpses of a young man trying to find his footing as a writer. They also offer a snapshot of a city in the grip of AIDS.
The New Yorker
26 Dec 22
More editors' picks