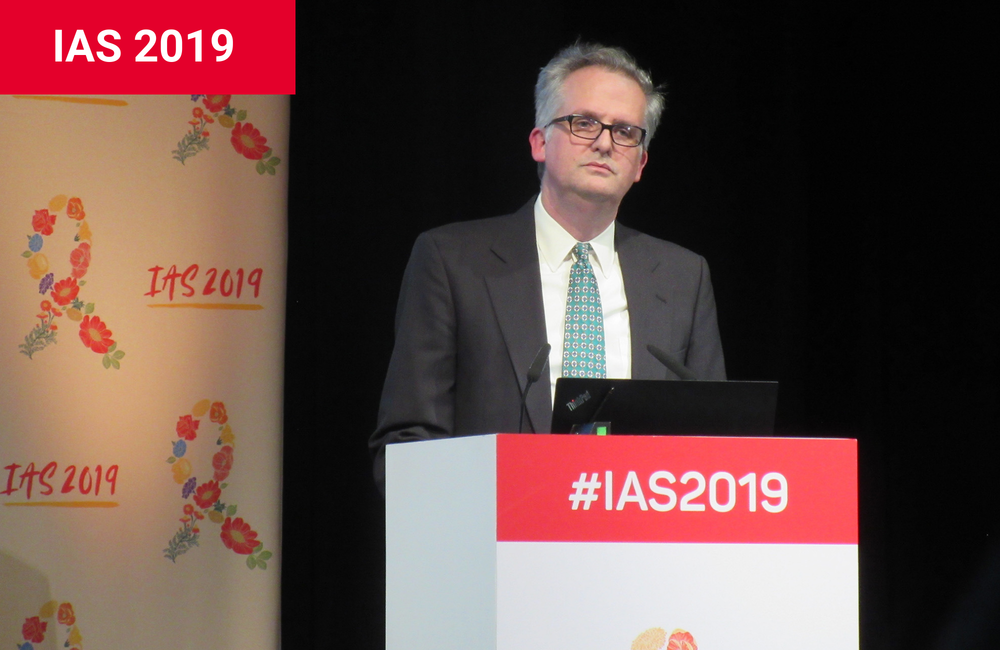 Islatravir is the latest HIV drug name to be added to the ever-growing list of antiretrovirals. The drug formerly known as MK-8591 was the subject of one of the most keenly-awaited studies to be presented at this week’s 10th International AIDS Society Conference on HIV Science (IAS 2019) in Mexico City. This showed that an implant containing it, which is inserted under the skin of the upper arm, should provide sustained levels of drug sufficient to prevent HIV infection for over a year.

Islatravir or MK-8591, originally called EFdA, has been developed by Merck (MSD), and is a new type of reverse transcriptase inhibitor which does not just block the transcription of HIV viral RNA into DNA that can be integrated into cells by acting as a ‘fake’ genetic base, as other NRTIs do, but also locks HIV’s reverse transcriptase enzyme into a conformation where it is more easily degraded by cellular processes. It has extraordinary affinity for reverse transcriptase and effectively stops viral replication at blood and intracellular levels 100 times lower than other HIV drugs, and with a half-life of as long as seven days, meaning that it could be dosed monthly.

In previous studies of an oral formulation of the drug, a dose of as little as 0.5mg was sufficient to block HIV replication for a week, and oral islatravir is under investigation as an HIV treatment in combination with another daily Merck drug, doravirine.

Merck’s Dr Randolph Matthews told the conference that the drug’s extraordinary persistence clearly made it suitable for long-acting formulations.

Merck has formulated the drug as an implant, a small plastic insert that is placed under the skin of the upper arm, a technology already used by the same company for contraceptives, and which has also been tried with other anti-HIV medications such as tenofovir. The Merck implant measures 4cm by 2mm and is not visible to others when implanted – an advantage for people who may fear being seen to take antiretrovirals. It has the advantage over long-acting injectable formulations of being removable, meaning not only that it can be taken out in the case of side-effects but also that there is less chance of resistance arising or being transmitted due to drug levels slowly tailing off in the body. Matthews said that once removed, levels of drug tailed off about as quickly as those of the oral dose.

The study of the pre-exposure prophylaxis (PrEP) implant announced yesterday only evaluated levels of the drug (versus placebo) in two different doses (54mg versus 62mg per implant) given to 16 individuals for a three-month period.

The purpose of the study was to assess the safety and tolerability of the implant, and to estimate the time at which the concentration of intracellular islatravir would fall below 0.05 picomols per million cells, the level previously determined to be the minimum effective level to stop HIV replication.

The higher dose (62mg) produced levels above this threshold in all trial volunteers for the three months the implant was in place, whereas levels fell below this for part of the time in a few people given the lower dose.

Although this was only a three-month study, projections based on the levels of drug seen show that the intracellular concentration of the drug produced by the implant should stay well above the prevention threshold for at least a year, and probably considerably longer.

The insertion of the implant is not totally without discomfort; nearly all participants said that the implant insertion initially produced some localised internal bleeding and discomfort, and a few complained of inflammation or itching in the implant area, but these side-effects were seen as tolerable by the participants.

Matthews told the conference that these initial safety results supported the development potential of the implant as a once-yearly PrEP option.