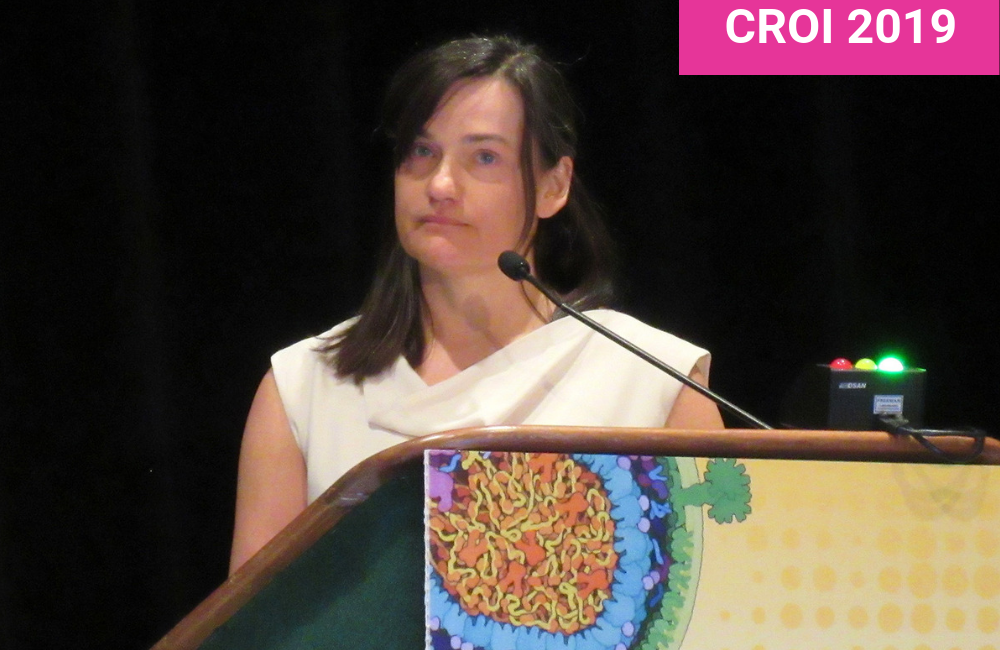 An experimental monoclonal antibody called PGT121 led to viral suppression that lasted for up to six months in HIV-positive people who started with a low viral load, according to results from a small study presented at the Conference on Retroviruses and Opportunistic Infections (CROI 2019) last month in Seattle.

This is the longest anyone has maintained undetectable HIV following a single infusion of broadly neutralising antibodies, and early data suggest PGT121 has the potential for use as pre-exposure prophylaxis (PrEP), said Dr Kathryn Stephenson of Beth Israel Deaconess Medical Center in Boston.

Broadly neutralising antibodies (bNAbs) that act against a wide range of HIV strains are one of many approaches being explored in an effort to cure HIV or, more likely, bring about long-term remission that will allow people with HIV to maintain viral suppression without lifelong daily antiretroviral therapy (ART). Although prior studies have shown that bNAbs have activity against replicating HIV, it is less clear whether they can target virus in latently infected cells, known as the viral reservoir. Most experts expect that a combination of different approaches will be required to achieve lasting remission or a cure.

PGT121 is a recombinant monoclonal antibody that targets the V3 glycan site on the outer envelope of HIV, SIV (a related virus that infects monkeys) and SHIV (a human-simian hybrid virus). It has demonstrated activity against 60% or more of HIV strains found worldwide. PGT121 is being developed by a collaboration that includes the International AIDS Vaccine Initiative, the Bill & Melinda Gates Foundation, the Scripps Institute and Theraclone Sciences.

Prior studies in rhesus macaque monkeys showed that PGT121 could decrease viral load, help delay viral rebound and protect against SHIV infection, suggest that it might potentially be used for both HIV treatment and prevention.

At last year's CROI, Dr Dan Barouch, also from Beth Israel, reported that most monkeys given PGT121 alone experienced viral rebound not long after stopping antiretrovirals, but a couple of animals maintained viral suppression longer than expected. Adding GS-9620, a TLR7 agonist that stimulates toll-like receptors to activate immune cells, led to a longer delay before viral rebound. In fact, five out of eleven monkeys treated with the combination maintained undetectable viral load for at least six months after stopping ART.

At this year's conference, Stephenson reported findings from a phase 1 clinical trial of PGT121 – the first study in humans.

The first part of the study was a dose-escalation trial that enrolled 20 HIV-negative volunteers and 15 HIV-positive people on suppressive ART. Participants received 3, 10 or 30 mg/kg of PGT121 administered as a single intravenous infusion or 3mg as a subcutaneous injection. In each group of five, one person received a placebo.

The second part was an open-label trial of PGT121 using the 30 mg/kg IV dose in 13 HIV-positive people who were not taking ART, of whom nine had a high viral load (above around 2000 to 100,000 copies/ml) and four had a low viral load (around 200 to 500 copies/ml). The HIV-positive participants were mostly white men, with a median age of 44 years for those on ART and 31 years for those off ART.

Treatment with PGT121 appeared safe and well tolerated. The half-life of PGT121 (a measure of how long it lasts in the body) was up to 23 days, but shorter in HIV-positive people not on ART (13 days). The most common side-effects were pain, redness and swelling at the injection site, usually rated as mild. One participant experienced a moderate adverse event thought to be drug-related. There was no evidence that PGT121 led to enhanced cellular immune responses and CD4 cell counts remained stable.

Looking at the HIV-positive people not on ART, five of nine participants in the high viral load group showed evidence of antiviral activity by day 10, with a median viral load decline of 1.7log10 (about 60 copies/ml); four were deemed non-responders. Although their HIV had been sensitive at baseline, by day 21-28 all five experienced viral rebound and were found to have resistant virus.

In the HIV-positive low viral load group, viral levels fell below the level of quantification in two participants by day 7. They maintained prolonged ART-free viral suppression, which in one case lasted over five months and in the other was still ongoing at six months. In these participants, viral remission continued after PGT121 antibodies had fallen to a low or undetectable level, suggesting long-term activity. Follow-up is continuing to see how long this remission will last.

"Long-term virologic suppression [is] likely due to exquisite potency of PGT121, even at levels below the limit of quantitation," the researchers concluded.

View the webcast of this presentation on the conference website.