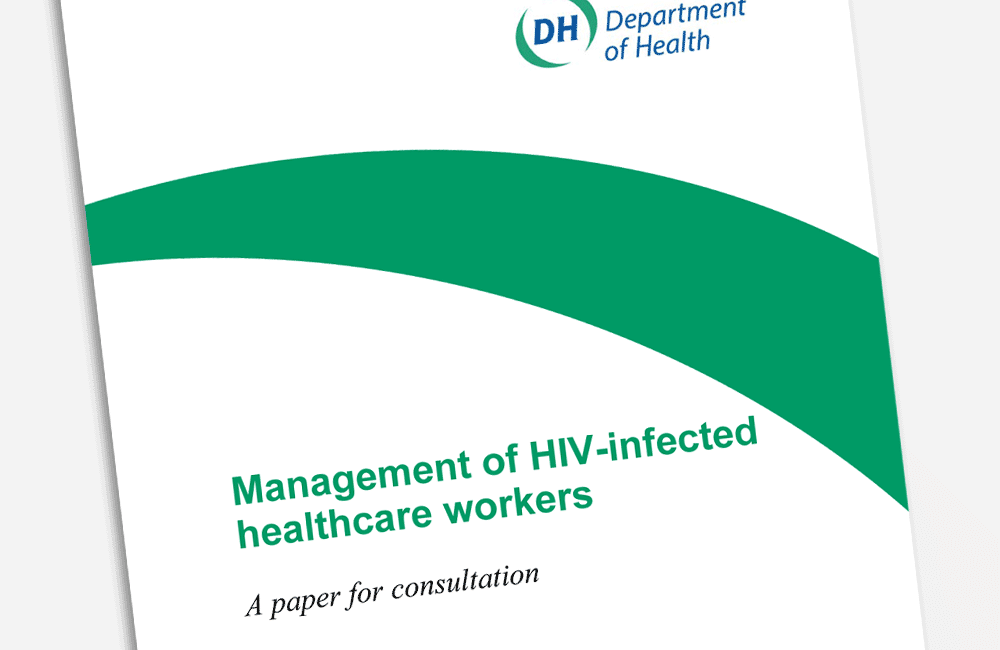 The Department of Health has opened a consultation on possible changes to its policy on the employment of people with HIV. The current ban on people with HIV performing specific procedures in surgery, dentistry and gynaecology may be lifted, so that staff who are taking antiretroviral therapy and have a viral load below 200 copies/ml could work in the NHS.

Implementation of the proposal will, in part, depend on the responses received during the public consultation that is open until 9 March 2012. Patient safety in the NHS is a sensitive political issue and if public discussion is not informed by scientific evidence, the proposals could be controversial.

Current UK policy is for a total ban on HIV-positive healthcare workers performing ‘exposure-prone procedures’. As a result, a number of medical jobs are not open to people with HIV and the consequences for someone diagnosed in the middle of their career can be devastating.

An exposure-prone procedure is one in which injury to the healthcare worker could result in the worker’s blood contaminating the patient’s open tissues. These procedures involve a combination of sharp objects and the worker’s hands being in a body cavity. Surgery is the most obvious example, but many dental procedures are also considered ‘exposure-prone’.

Only a few other developed countries (including Australia, Ireland and Italy) have a policy as restrictive as that of the UK. It is more common for the management of an HIV-positive healthcare worker to be determined on a case-by-case basis. This is the situation in Austria, Belgium, Canada, France, New Zealand and Sweden, for example.

A current court case, in which a dentist with HIV is claiming the current ban is discriminatory and unlawful, helps explains why the government is considering the change.

A working group of experts examined the evidence on the risk of transmission occurring in healthcare settings, especially when patients have been treated by an HIV-positive health worker. Internationally, there have only been four cases of transmission, none of them in the UK. In the United States, testing of 22,171 patients who had been treated by 51 different HIV-positive workers, including surgeons, obstetricians and dentists, did not identify any new HIV infections.

But the experts consider that the risk of HIV transmission will vary, depending on the infectiousness of the health worker, as measured by viral load.

They therefore recommend that HIV-positive workers should be allowed to perform exposure-prone procedures as long as:

The recommendations therefore open the possibility of individuals taking HIV treatment for occupational health reasons, when it would not otherwise be recommended.

Workers whose viral load rebounded or who ceased to comply with the testing requirements would be asked not to perform exposure-prone procedures until the situation was resolved.

Based on the prevalence of HIV in the England and the number of NHS employees who perform exposure-prone procedures, the experts estimate that the measures could affect around 110 HIV-positive workers (including those with undiagnosed infection).

England’s Chief Medical Officer, Dame Sally Davies, commented: "We need to ensure that the guidelines and restrictions imposed are evidence-based and achieve a fair balance between patient safety and the rights and responsibilities of healthcare workers with HIV. This consultation will seek wide views on the expert advice and whether it should be accepted."

The chairman of the Expert Advisory Group on AIDS, Professor Brian Gazzard, said: "Our careful review of the evidence suggests that the current restrictions on healthcare workers with HIV are now out of step with evidence about the minimal risk of transmission of infection to patients and policies in most other countries. This risk can be reduced even further if the healthcare worker is taking effective drug therapy for HIV and being monitored by HIV and occupational health specialists."

As healthcare is a responsibility of the devolved administrations in the United Kingdom, there are likely to be parallel consultations in the four countries. England and Scotland have already issued consultation documents, both of which are open until 9 March 2012.The consultation in Wales is open until 23 February 2012.

The High Court has ordered a privately owned hospital to pay a former employee Sh2 million as damages for testing her HIV status without her consent and disclosing the results to third parties.
AllAfrica
5 Jul 21
Employment

In November 2018, we received evidence from the National AIDS Trust that Elite Careplus Limited (ECL) was asking questions about applicants’ health during the recruitment process. We launched enforcement action against ECL and found the questions to be unlawful.
Equality and Human Rights Commission
17 May 21
Coronavirus

Disabled activists have warned of the “chilling” impact on disabled workers of the government’s decision to end shielding from the end of this month.
Disability News Service
26 Mar 21
Employment