Older African women are also better educated than others, but more likely to be poor
Gus Cairns 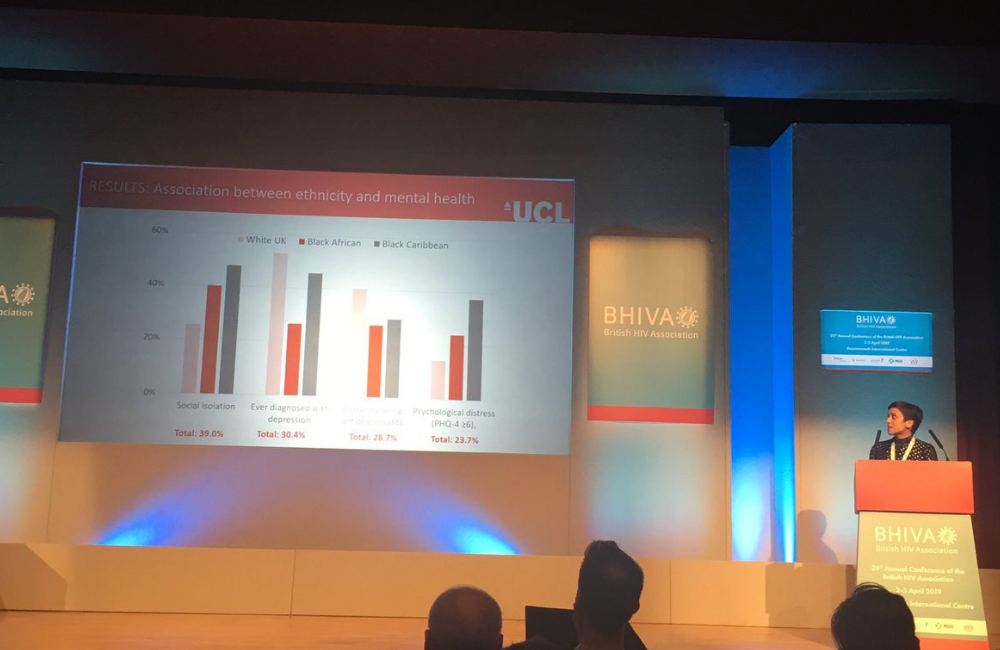 A study looking at women aged over 45 living with HIV in the UK has found that while black African and Caribbean women experience greater social isolation and subjective mental distress than white women, they are less likely ever to have been diagnosed with depression or have it treated.

Older African women were also more likely to experience poverty than white or Caribbean women despite being twice as likely to have had a university education.

These findings from the PRIME study were presented to the British HIV Association (BHIVA) conference two weeks ago by Dr Rageshri Dhairyawan of the Barts and Royal London NHS Trust. She said that the ageing of the HIV-positive population in the UK was particularly accentuated in women. In 2006, 14% of women with HIV in the UK were over 45 years old and 44% under 35; in 2016, 52% were over 45 and 15% under 35.

Women with health issues were affected by both their gender and their age, Dr Dhairyawan said. General health surveys show that being female is associated with a poorer health-related quality of life in older people; older women have a lower socioeconomic status than men; and black and minority ethnic (BAME) women have worse mental health as they age than white women.

Finally, 20 women out of the 869 were selected for in-depth interviews to further explore themes.

For the purposes of the analysis presented at BHIVA, only women of white British, black African, and black Caribbean ethnicity were selected, for the purposes of isolating the clearest contrasts between them. So 115 women of other and mixed ethnicity (12% of the total) were excluded. This left 607 black African women (72%), 71 white British women (8.4%) and 46 black Caribbean women (5.4%).

Eighty-five per cent were born outside the UK, and there was a very wide range in the amount of time they had been in Britain. A quarter of them had been here less than three years, while another quarter had been here more than 43 years (in other words had moved to the UK aged 3-22).

African women were, on the whole, better educated: about half of them had been to university compared with a quarter of both white and Caribbean women. They were also slightly more likely to be employed. Despite this, they were more likely to be living below the poverty line. Forty-two per cent of African women said they did not have enough money for basic needs compared with 36% of Caribbean women and 15% of white UK-born women.

Caribbean women were the most likely to say they felt socially isolated: 48% did, compared with 40% of African women and 25% of white UK women.

There was striking inequality when it came to women’s mental health needs. A quarter of all women had moderate to high levels of psychological distress, i.e. they experienced depression, anxiety and other symptoms. Caribbean women were more likely than average to experience these (38%) and white women less likely (14%).

Despite this, white women were considerably more likely to be taking anti-depressants (41% took them, compared with 28% of Caribbean women and 26% of Africans). White women were even more likely to have ever been diagnosed with depression: 72%, compared with 47% of Caribbean women and only 25% of African women. This shows pretty clearly how diagnoses of mental illness do not reflect actual mental health needs.

Poor mental health had potential physical consequences. Women with moderate to severe psychological distress were 2.3 times more likely to have forgotten to take at least one dose of their antiretrovirals in the last week (33% versus 18%) and were 75% more likely to have forgotten an HIV clinic appointment in the last year. However, this had no effect on viral suppression; 13% of women with moderate to severe distress had a detectable viral load versus 11% with no or mild distress, and this difference was not statistically significant.

Enacting Medicaid expansion in Texas and increasing the use of preventive and antiviral medications could result in a decline of new HIV infections among young Black gay, bisexual, and other men who have sex with men in Houston, reports a study in the January issue of Medical Care.
EurekAlert
13 Dec 22
Ethnic & cultural minorities

Most large clusters of HIV transmission taking place in the United States occur among men who have sex with men, many of whom are minorities, according to a CDC report.
Infectious Disease Special Edition
31 Oct 22
More editors' picks