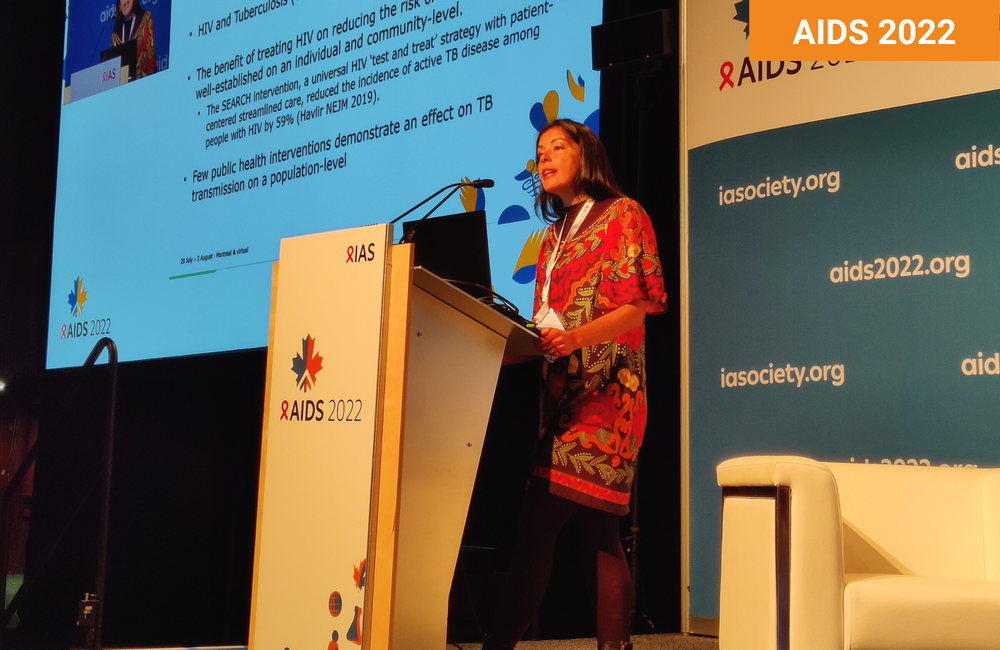 A large campaign in Uganda to ramp up HIV testing and immediate HIV treatment reduced the incidence of tuberculosis (TB) in the intervention communities by 27% after one year, underlining the potential impact of HIV-related investments on wider population health, investigators of the SEARCH study reported at the 24th International AIDS Conference (AIDS 2022) on Sunday.

The SEARCH study is one of the largest implementation studies of universal HIV test-and-treat to be conducted. The study randomised communities to receive either the intervention or standard of care according to national guidelines and took place between 2013 and 2016 in rural communities in Uganda and Kenya. The intervention consisted of:

Results from the SEARCH study have been presented at several major conferences and demonstrate substantial impact of the intervention, including:

At AIDS 2022, Dr Carina Marquez of the University of California San Francisco presented results of an analysis of TB incidence in nine communities that participated in the SEARCH study in Uganda, where TB symptom screening was a component of the intervention.

The study measured the incidence of TB after one year by looking at conversion from negative to positive tuberculin skin test (TST), indicating likely recent exposure to TB in the community.

The study sampled 1435 households in nine communities, testing 4884 people at baseline (58% of those eligible to participate). Those tested were predominantly under 18 (58% in the intervention communities), 46% lived in a household with a person with HIV, 10% were living with HIV and over 90% had received the BCG vaccination to protect against TB.

After one year, the incidence of TB was 27% lower in intervention communities. Sixteen per cent of participants in intervention communities tested positive for TB after one year compared to 22% in control group communities. The reduction in risk was significant in children aged 5-11 years (aRR 0.71, 95% CI 0.52-0.97, p = 0.016) but not in participants aged 12 and over (aRR 0.84, 95% CI 0.64-1.11, p = 0.106). This result is probably explained by the fact that adolescents and adults were more likely to have been exposed to TB previously, Carina Marquez said.

She told the conference that reduced TB incidence is likely to be a consequence of several factors. As well as a reduction in the duration of infectiousness due to improved detection and treatment of active TB through symptom screening, susceptibility to the activation of latent TB or progression to active TB is likely to be reduced due to improved immune status in people on antiretroviral treatment. This leads to a reduction in the number of people with active TB in the community.

While there are nine experimental tuberculosis (TB) vaccines in advanced trials, the vaccine pipeline beyond those nine prospects is relatively depleted. Adele Baleta reports on this and much more from the virtual Global TB Vaccine Forum held last week.
Spotlight
28 Feb 22
TB transmission & prevention

Finally Cause for Optimism About TB Vaccine Research, Says Fauci

There is finally “cause for optimism” in the quest for a tuberculosis vaccine, Dr Anthony Fauci, director of the US National Institute of Allergy and Infectious Disease (NIAD), told the opening of the sixth Global Forum on TB Vaccines on Tuesday.
Health Policy Watch
23 Feb 22
TB transmission & prevention

New research published at the opening of the 52nd Union World Conference on Lung Health has demonstrated that routine breathing can transmit tuberculosis even more effectively than coughing – in a finding that also echoes one of the signature lessons of the COVID pandemic.
Health Policy Watch
20 Oct 21
More editors' picks