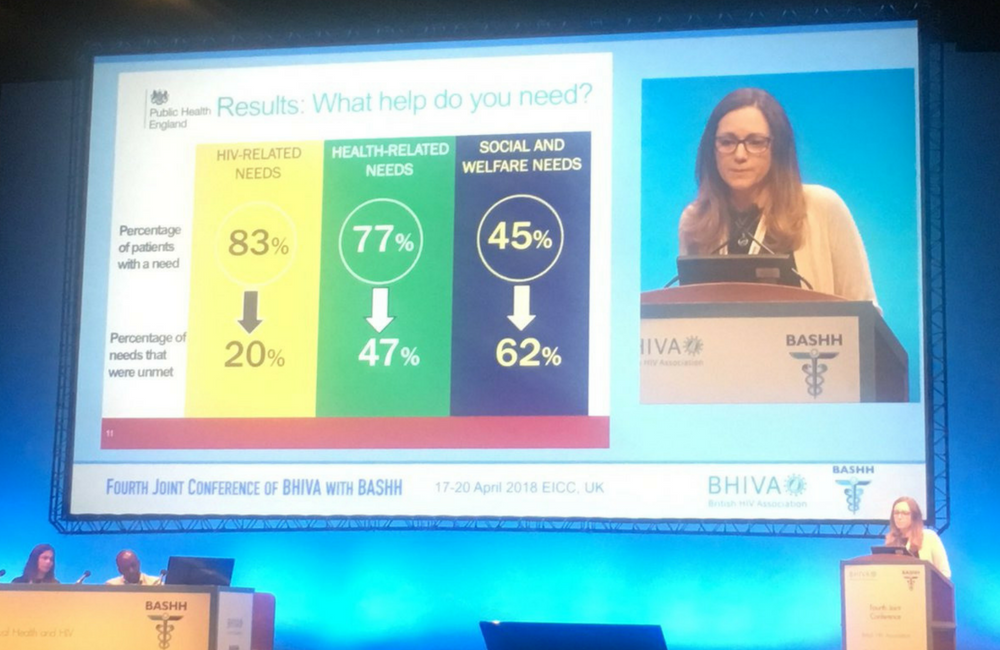 A survey of a large, representative sample of people attending HIV clinics in England has identified satisfaction with HIV-related services, but considerable unmet need for social and welfare services, in particular support to alleviate loneliness and isolation. Meaghan Kall of Public Health England presented the data at the joint British HIV Association (BHIVA) and British Association for Sexual Health and HIV (BASHH) conference in Edinburgh yesterday.

Previous studies addressing the issue have tended to rely on samples of people recruited through HIV support organisations (which could be expected to recruit large numbers of people with social difficulties) or a limited number of HIV clinics.

The new study, Positive Voices, approached all 185 HIV clinics in England and Wales (73 took part) and then identified a random sample of 20% of patients at each clinic. During 2017, these individuals were contacted by clinic staff and invited to complete a cross-sectional survey. Of the 12114 patients identified, 8606 were successfully contacted and 4415 completed the survey.

The characteristics of people taking part in Positive Voices are very similar to the national profile of adolescents and adults attending HIV clinical services, in terms of age, exposure route, gender (28% female), ethnicity (24% black African), and geography (51% outside London).

The vast majority of people said they needed HIV-related services and most of them did receive them. Most people also needed some other health services, but only half got what they needed.

The picture is worse for social and welfare services. Just under half of respondents (45%) needed these services, but only 38% of those with needs received services, leaving 62% of these needs unmet.

Help with dealing with loneliness and isolation was the greatest unmet need. Twenty per cent of all respondents expressed this need, 75% of whom said they had not received any help with it. Loneliness was equally common in all age groups, ethnicities, genders and sexualities. There weren’t any demographic groups who were more likely to receive help than others.

Other unmet social and welfare needs were career skills and training, childcare services, financial advice, employment advice, legal advice, relationship advice, meal or food services, immigration support and domestic violence services. The number of people needing any particular service was not particularly large (usually 10 or 15%), but most of those with needs did not get any support.

Larger numbers of people needed housing support (22%) and help claiming benefits (19%). Around half did get some help.

Significant numbers of people also had needs for a range of health services – 77% needed these services, but only 53% of those with needs received services, leaving 47% of these needs unmet.

Help to manage stress (33%), counselling or psychology (31%), weight management (29%) and advice about sex (27%) were the most commonly expressed needs. The numbers of respondents who wanted support in relation to drug dependence treatment or chemsex were relatively small (5 and 6% respectively), but there were very high levels of unmet need for these (60 and 55% respectively).

Most respondents said they needed HIV-related services, which may be expected as having HIV was the one thing all respondents had in common. In total, 83% said they had needs in relation to HIV and 80% of those with needs did receive some services, leaving 20% with unmet needs.

The most commonly expressed HIV needs were for HIV treatment advice (61% of participants), information about living with HIV, including websites (47%) and adherence support (40%). Almost everyone who expressed these needs had received help with them (93, 87 and 93% respectively).

The highest level of unmet HIV-related need was for peer support and social contact with other people living with HIV. While 32% of all respondents expressed a need for this, only 57% of those individuals had received relevant services. Nationally, it could be extrapolated that around 28,000 wanted to receive peer support, with 12,000 not receiving any.

Other questions showed that satisfaction with HIV clinical services was extremely high – 94% thought they were involved in decisions, 96% said they had enough time at appointments and 97% said staff listened to them.

The researchers also assessed participants’ health-related quality of life and mental health. As they used a standardised instrument to measure this (Euroqol EQ-5D-5L), they were able to make comparisons with the general population on quality of life. (The questions about needs have not been asked in surveys with the general population, so comparisons couldn’t be made.)

For people with HIV, the most challenging areas currently affecting quality of life were anxiety and depression (around a quarter of respondents had moderate or severe problems) and pain and discomfort (around a fifth had moderate or severe problems). The other areas assessed were abilities to engage with usual activities, to be mobile and to self-care.

Whereas the overall quality of life score for the general population is 0.86, the average score for people with HIV was lower at 0.60. (Possible scores range between 0 and 1.)

Among people living with HIV, scores were similar between men and women.

Particularly low scores were recorded in people who had acquired HIV through injecting drug use (0.31), people infected through blood products (0.48) and trans and non-binary people (0.50).

More encouragingly, people who were born with HIV – often seen as a group with high levels of need – reported the highest quality of life scores (0.83), comparable to those in the general population.

Kelly C et al. Health-related quality of life of adults living with HIV in England and Wales: a utility analysis of EQ-5D-5L compared to the general population. Fourth Joint Conference of the British HIV Association (BHIVA) with the British Association for Sexual Health and HIV (BASHH), Edinburgh, April 2018, abstract P284.

What do older people living with HIV do to look after their own mental health?

Can Peer Support Programs Help Those Living With HIV?

Thrive SS, a support program for black gay men living with HIV, credits its popularity to forgoing federal funding. But how does it measure success?
Undark
5 Dec 19
Women

Confronting the link between HIV and gender-based violence in Jamaica

Monique McDonald is an HIV peer educator who tells the story of her childhood with unflinching courage. “I was sexually abused by my uncle at the age of 12 and contracted HIV.”
UNAIDS
7 Nov 19
Finding support

Online searches may reveal information about how we think about health and disease. Cornell computer science researcher Rediet Abebe and her team set out to discover what we can learn about public health on the African continent from people’s online searches and whether we can use this information to understand what people really want to know about disease and are afraid to ask.
Forbes
25 Apr 19
Retention & linkage to care

Based out of the Humsafar Trust’s office jn Mumbai, the centre will give free counselling and provide Anti-Retroviral Therapy (ART) to the LGBTQ community. TAshok Row Kavi, founder chairperson of the Trust, said: “Until now we would get testing done for the community members at our centre. If tested positive for the disease, they would be asked to go to Sion Hospital, but there was a huge dropout (rate) there. Because of how the community is perceived outside, a lot of these people wouldn’t seek treatment."
Hindustan Times
12 Mar 19
People & personal stories