Long COVID in people with HIV

‘Long COVID’ refers to symptoms that persist in some people for months or years after being ill with COVID-19. As well as persistent cough, fever, fatigue and shortness of breath, people suffering from long COVID may report ‘brain fog’, loss of smell, difficulty in concentrating, sleep problems, joint and muscle pain, dizziness or palpitations.

In the general population, around 5% of people still have symptoms three to four months after developing COVID. The risk of long COVID is higher in older people, women, people with pre-existing conditions, those who are overweight or obese, and in people of lower socioeconomic status. Having originally had a more severe COVID illness is also a risk factor.

What may be the first study of long COVID in people with HIV has recently appeared. It compared 39 HIV-positive and 43 HIV-negative people recovering from COVID-19, so it is a small study and its findings are not definitive. While the researchers tried to compare people who were as similar as possible (in terms of age, gender, time since infection and whether they had needed to go to hospital), some important differences remained – for example, 26% of the people with HIV were smokers, compared to 2% of the HIV-negative people.

Almost all the people with HIV were taking HIV treatment and had undetectable viral loads. The data were collected in 2020, before the roll out of vaccines (which reduce the risk of long COVID).

The researchers were interested in symptoms that were new or were getting worse. Around four months after testing positive for COVID, 42% of people with HIV reported fatigue, 42% reported concentration problems, 34% trouble sleeping, 24% muscle pain and 21% vision problems. Each of these symptoms was approximately twice as frequently reported by HIV-positive people than HIV-negative people.

Detailed analysis of immune system markers showed several differences between people with HIV and the HIV-negative control group, with one predicting the presence of long COVID.

One of the scientists involved says that the presence of chronic inflammation alongside disturbed immune function in people living with HIV may contribute to the higher risk. He said people should receive treatment with antibodies and antivirals (like molnupiravir) when they first develop symptoms of COVID-19 to reduce levels of the virus. This might help reduce the risk of long COVID, he said. 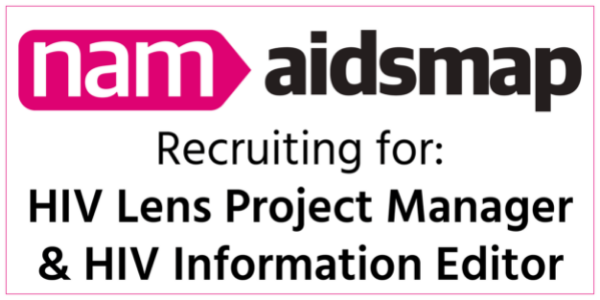 The full-time HIV Information Editor role will include developing, monitoring and updating aidsmap’s About HIV pages and NAM’s printed materials, as well as providing information in other media formats, such as video, and on other platforms, such as social media.

The part-time HIV Lens Project Manager will oversee the next phase of HIV Lens' development (an online mapping project graphically displaying the impact of HIV/AIDS in England). The role will include managing the addition and expansion of new indicators and data on the site and expanding HIV Lens to cover the rest of the UK and Ireland.

The injectable HIV medications cabotegravir (Vocabria) and rilpivirine (Rekambys) are now licensed by drug regulators in the UK, European Union, United States, Canada and Australia. In the UK, the first patients will start receiving their injections in the next few weeks.

In most territories, the drug regulators have approved two different dosing schedules: once monthly and every other month. Long-term results, comparing the two regimens, have recently been released. The overall results are encouraging – but those using the less frequent dosing schedule were more likely to experience virological failure.

The researchers randomly assigned just over 1000 people with HIV to take the injections either every month or every two months. After almost three years, 86% in the once-monthly group had an undetectable viral load, compared to 87% in the every-other-month group – not a significant difference. Most of the remaining people who were not recorded as being undetectable had actually stopped taking part in the study.

Very few participants had virological failure – two people (less than 1%) in the once-monthly group and eleven (2%) in the every-other-month group had two consecutive viral load measurements above 200 copies/ml.

But some doctors believe that the higher number of failures in the every-other-month group is a concern, especially as we know that those in the study had had all their injections. They say that patients need to know about this possibility when deciding whether to have the injections, especially as people who develop resistance to the drugs could be left with few remaining treatment options and a detectable viral load could have implications for HIV transmission.

However, the manufacturer only markets the higher dosage used for the every-other-month regimen in the UK and Europe, leaving doctors without the option of prescribing the once-monthly schedule.

There are some risk factors for the injectable medications not working – pre-existing resistance to rilpivirine (one of the drugs used), an HIV subtype that is most common in Russia, and a body mass index of 30 or above (clinically obese).

The injections were safe and well tolerated (a few more people complained of injection site reactions in the monthly arm). Most participants reported greater satisfaction with cabotegravir and rilpivirine injections compared with daily oral treatment, and they preferred every-other-month to once-monthly dosing. 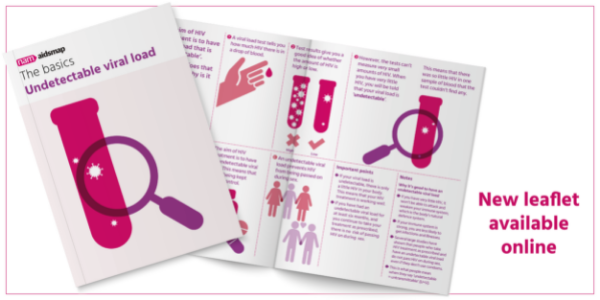 We've updated our easy-to-read and illustrated information page on having an undetectable viral load.

The aim of HIV treatment is to have an undetectable viral load: this means that your HIV is being kept under control.

If you have had an undetectable viral load for at least six months, and you continue to take your treatment as prescribed, there is no risk of passing HIV on during sex.

High blood pressure increases the risk of stroke, heart attack and other forms of cardiovascular disease, as well as raising the risk for chronic kidney disease and dementia.

Around a third of people living with HIV taking HIV treatment have high blood pressure. Numerous factors associated with HIV including metabolic changes and inflammation might play a role, but there is still lots of uncertainty about this. Previous research has shown that some antiretroviral drugs, including older protease inhibitors, are associated with an increased risk of high blood pressure.

Now, a new study has found a link between integrase inhibitors (a widely used class of modern HIV medications) and high blood pressure. These medications are already known to have a link with weight gain, so it’s possible that this is part of the explanation, although the researchers haven’t yet looked at this in detail.

The most commonly used integrase inhibitors in the study were dolutegravir (Tivicay, also included in Triumeq, Juluca and Dovato) and elvitegravir (included in Stribild and Genvoya).

The study included over 4000 people with HIV in Europe and Australia who were starting or changing their HIV treatment, including 68% who were given an integrase inhibitor, 18% an NNRTI and 13% a protease inhibitor. At the time of starting these meds, average blood pressure was the same in each group.

Other risk factors that predicted the development of high blood pressure included a previous AIDS diagnosis, a CD4 count below 350, older age, and a body mass index of 30 or above (clinically obese). 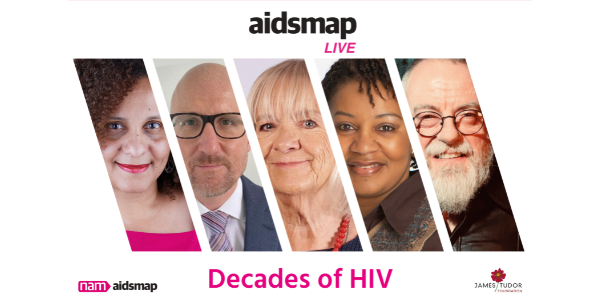 Last month, we broadcast an aidsmapLIVE on ageing and HIV.

NAM aidsmap’s Susan Cole was joined by guests Dr Tristan Barber, HIV doctor at The Royal Free Hospital with expertise in ageing issues; Jo Josh, communications adviser at the British HIV Association; Rebecca Mbewe, co-director of the 4M Mentor Mothers Network; and campaigner Richard Desmond, who has been living with HIV since 1985.

Russia’s invasion of Ukraine could spark an upsurge in HIV and tuberculosis and undo a decade of gains in public health, experts warn.

HIV treatment, prevention therapies in Ukraine at risk of running out | Devex

“We hope that in a week we will have supplies ... because if not, we will have a really high level of HIV epidemic and all our progress … for [the] prevention of HIV will be stopped,” Velta Parkhomenko from community-based organization Club Eney tells Devex from Kyiv.

Out and About! Archiving LGBTQ+ history at Bishopsgate Institute review: queer and beautiful | Evening Standard

Queer history is not just about political activism. That is loud and clear as the Bishopsgate Institute takes over the Curve Gallery in London's Barbican Centre to celebrate their 40th birthday.

How to induce rage in a doctor | HIV and ID Observations

Asking doctors to justify treatment decisions to insurance companies and their pharmacy benefit managers must rank right up there with the greatest tortures of practising medicine in the US. These struggles are an inevitable part of a healthcare system that values profits over people.