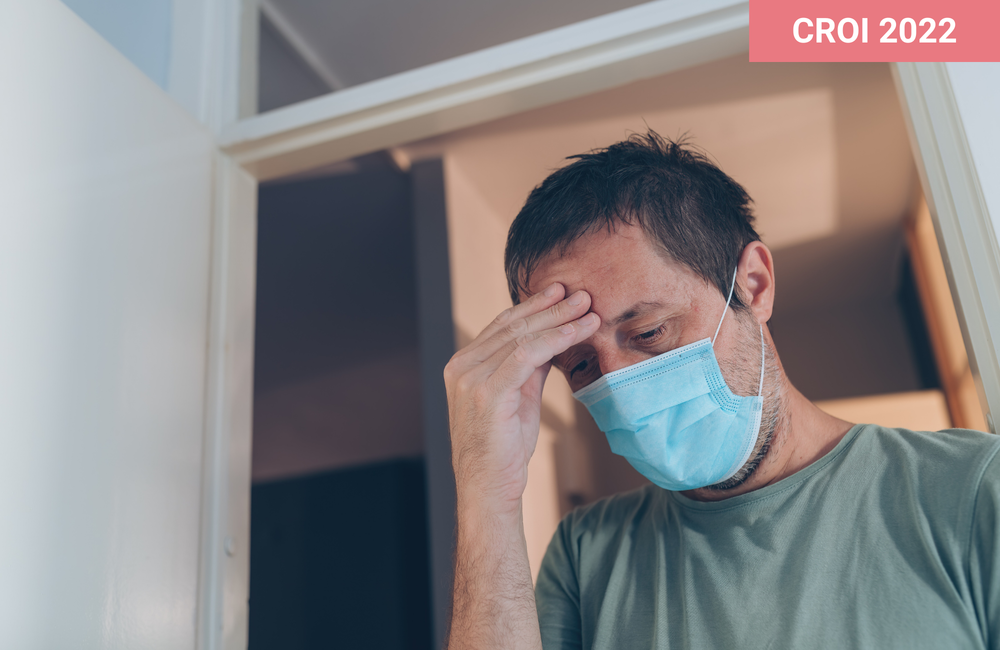 Bits And Splits/Shutterstock.com. Image is for illustrative purposes only.

Unvaccinated people with HIV were four times more likely than HIV-negative people to experience ‘long COVID’ symptoms after acute COVID-19 illness and these symptoms were associated with higher levels of inflammatory markers, a small study conducted by HIV researchers at University of California San Francisco has found.

The study has been made available as a pre-print, prior to peer review.

Professor Steven Deeks, one of the authors of the study, told a Conference on Retroviruses and Opportunistic Infections (CROI 2022) session on long COVID that the presence of chronic inflammation alongside disturbed immune function may contribute to the higher risk – but all panellists in the session admitted that there is still much to learn about what causes the condition. Deeks said the data suggest that people with COVID-19 should be aggressively treated at the time they first develop symptoms to reduce virus levels and minimise the risk of long COVID.

‘Long COVID’ is a label applied to a heterogenous array of symptoms that persist in some people for months or years after an acute illness caused by SARS-CoV-2. As well as persistent cough, fever, fatigue and shortness of breath, people suffering from long COVID may report cognitive dysfunction (‘brain fog’), loss of smell, difficulty in concentrating, insomnia, joint and muscle pain, dizziness or palpitations.

A large UK study found that three to four months after developing COVID, around 5% of people still had symptoms – and that if people had not recovered after three months, the symptoms tended to persist. The risk of long COVID was higher in older people, women, people with pre-existing conditions or high body mass index and in people of lower socioeconomic status. More severe acute infection was also a risk factor. Vaccination reduces the risk of long COVID symptoms.

The University of California San Francisco study compared immune system markers and symptoms in 39 people with HIV recovering from COVID-19 contracted prior to vaccination and an HIV-negative control group of 43 people matched by age, sex, history of hospitalisation for COVID-19 and time since infection.

Participants with HIV had a median age of 54 years, 95% were male, 38% White, 36% Hispanic, 18% Black/African American and 5% Pacific Islander. One in four (26%) was a current smoker. Participants in the HIV-negative control group were more often White (60%) and less often current smokers (2%) than the HIV-positive participants.

A history of severe COVID-19 was rare in study participants. Only 13% of people with HIV and 17% of HIV-negative participants had been hospitalised and only one person in each group had required mechanical ventilation. None had received specialised treatments for COVID-19 (all were hospitalised before December 2020).

In this study, long COVID, or post-acute sequelae of SARS-CoV-2 (PASC) as it is labelled, was defined as the presence of COVID-19 symptoms more than six weeks after SARS-CoV-2 infection. Symptoms that were present before COVID-19 were not included.

Participants underwent symptom and immunological assessment approximately four months after testing positive for SARS-CoV-2 (median 124 days). The most commonly reported new or worsening symptoms at the assessment visit in people with HIV were fatigue (42%), muscle pain (24%), concentration problems (42%), vision problems (21%) and trouble sleeping (34%). Each of these symptoms was approximately twice as frequently reported by people with HIV compared to the control group. Shortness of breath, runny nose, palpitations, gastrointestinal complaints and dizziness occurred at similar frequencies in both groups (< 20% in each case).

All participants with HIV were on antiretroviral treatment, all but two had undetectable viral loads and the median CD4 cell count was 596 (not significantly different from the median count in HIV-negative participants).

Immunological analysis showed several differences between people with HIV and the HIV-negative control group. People with HIV had 70% lower levels of SARS-CoV-2-specific memory CD8+ T cells and higher levels of PD-1 expression on SARS-CoV-2-specific memory CD4+ T cells. Lower CD8+ T cell levels may indicate reduced capacity to respond to SARS-CoV-2 infection in the future. Greater PD-1 expression may indicate that these CD4 cells will be less efficient in responding to SARS-CoV-2 if they encounter the virus again.

However, people with HIV did not have reduced antibody responses when compared to the HIV-negative control group.

There was no relationship between antibody or T-cell responses to SARS-CoV-2 and the presence of symptoms, but higher levels of PD-1 expression on CD4+ memory T cells did predict the presence of long COVID. Why PD-1 levels should correlate with long COVID symptoms remains unclear. Rather than indicating reduced CD4 cell function against future infection, higher PD-1 levels might be a sign of greater exposure to SARS-CoV-2 antigen, the authors speculate.

The researchers say larger studies of long COVID frequency in people with HIV are needed, especially in women and people with poorer immune function.

Treatment for long COVID may include rehabilitation and physical therapy, antidepressants, supplements and probiotics, as well as experimental use of pharmaceutical drugs to target particular aspects of the syndrome.

But based on evidence from several studies that long COVID is associated with higher virus levels in acute infection, Professor Deeks said: “As this virus becomes endemic, there’s still going to be a reason to treat people very aggressively […] with antibodies and antivirals. Based on everything we know, that should substantially reduce the risk of developing long-term complications.”

Update: Following the pre-print, this study was published in a peer-reviewed journal:

Deeks S. Putting Long COVID in context. Session: Long COVID - From Bench to Bedside and Beyond. Conference on Retroviruses and Opportunistic Infections, 2022.