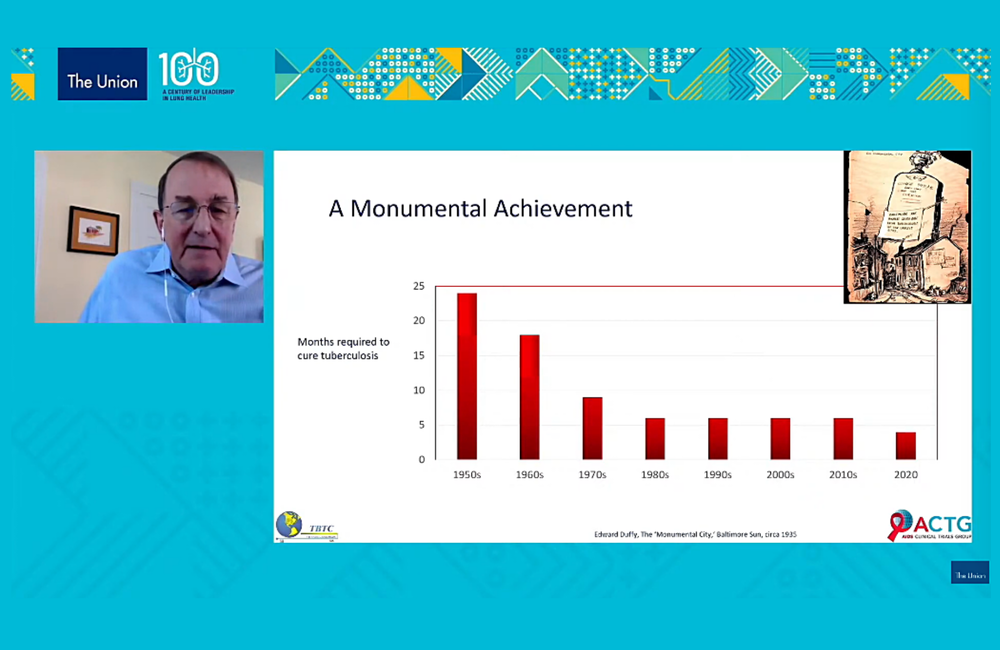 Tuberculosis treatment for people without drug resistance can be shortened from six months to four months by replacing two drugs in the standard regimen with newer agents (high-dose rifapentine and moxifloxacin), results from a large international trial show.

The results of Study 31, run by the CDC's Tuberculosis Trials Consortium in collaboration with the NIAID-funded AIDS Clinical Trials Group, were presented yesterday at the virtual Union World Conference on Lung Health.

Shortening the duration of  tuberculosis (TB) treatment has been a long-term research goal, Professor Richard Chaisson of Johns Hopkins Bloomberg Medical School told the conference. The time required to cure TB hasn’t fallen since the 1980s and it has taken over 20 years to conduct the studies high-dose rifapentine and moxifloxacin that contributed to the eventual design of Study 31.

A shorter course of treatment would improve adherence and reduce costs for the health system and people with TB. In particular, it would enable directly observed treatment to be completed quicker and would allow people with TB to return to work quicker, reducing the household impact of TB.

The international study recruited people with newly diagnosed culture-positive and drug-susceptible pulmonary TB at 34 sites in 13 countries in Asia, the Americas, Africa and Europe. People with HIV were eligible to join the study if they had a CD4 cell count over 100.

The study randomised 2516 people to one of three regimens:

Of those randomised, 2343 had drug-susceptible TB and were included in the primary outcome analysis. The primary outcome measured in the study was TB-free survival at 12 months, with the absence of cure defined as an unfavourable outcome. The study found no significant difference in unfavourable outcome between the control group (14.6%) and the RPT-MOX group (15.5%), meaning that the RPT-MOX regimen met the statistical criteria for non-inferiority and was just as effective as standard treatment.

However, the RPT regimen was inferior to standard treatment. 17.7% in the RPT group had an unfavourable outcome compared to 14.6% in the standard-of-care group in the 'microbiological' analysis (randomised and still eligible for treatment after resistance testing), a difference of 3.1% on an unadjusted analysis. The confidence intervals exceeded the non-inferiority margin of 6.6% (-0.5% - 6.8%).

The 'assessable' analysis, which excluded people lost to follow-up after a final negative chest X-ray and people who died during follow-up, also found that RPT-MOX met the non-inferiority criteria whereas the RPT regimen was inferior. RPT did not meet the non-inferiority criteria in any sensitivity analysis or a per-protocol analysis, even though both experimental regimens were significantly more likely to result in culture conversion (lack of evidence of TB bacteria in a sputum sample) by week 8.

In the 'assessable' population, 10% of people on the RPT regimen had an unfavourable TB-related outcome (culture-positive after week 17, clinical recurrence or culture-positive at last visit) compared to 6% on the RPT-MOX regimen and 3.3% on the control regimen.

There was no significant difference in the incidence of serious adverse events, treatment-related adverse events or liver enzyme abnormalities between study regimens.

A sub-group analysis of people with HIV (214 people) showed a lower rate of serious adverse events and a lower rate of unfavourable outcomes in those who received the RPT-MOX regimen (58 persons) in comparison to other study arms. In the 'assessable' population, 8.6% of people with HIV receiving RPT-MOX had an unfavourable outcome compared to 15.3% receiving the standard of care. A similar trend was evident for all outcome and adverse event measures in people with HIV with the exception of the per-protocol analysis.

Sub-group analysis showed that the RPT regimen, although inferior overall to the standard of care, did meet non-inferiority criteria in women and in people with a low TB burden (as measured by lack of lung cavities at X-ray or low acid-fast bacilli smear grade). There was no difference in outcome by sub-group when the RPT-MOX regimen was compared to the standard of care.

“This is the first clinical trial to identify a short-course regimen that works just as well as standard treatment,” said Professor Susan Dorman of the Medical University of South Carolina, presenting the results.

“We strongly believe this is a real breakthrough, as the new regimen will generate better treatment outcomes for TB patients,” said Dorothy Namutaba, co-chair of the Community Research Advisors Group. “TB-affected communities have always wished for shorter, easier TB treatment with fewer side effects.”

“We call for national TB programmes, regulatory agencies, and international organisations to make this four-month regimen of existing drugs available as soon as possible—starting in the countries that hosted clinical trials sites that made this result possible,” said Mike Frick, Treatment Action Group’s TB Project Co-Director.

Dorman S et al. Four-Month Rifapentine Regimens with or without Moxifloxacin for Tuberculosis. The New England Journal of Medicine, 384: 1705-1718, May 2021.