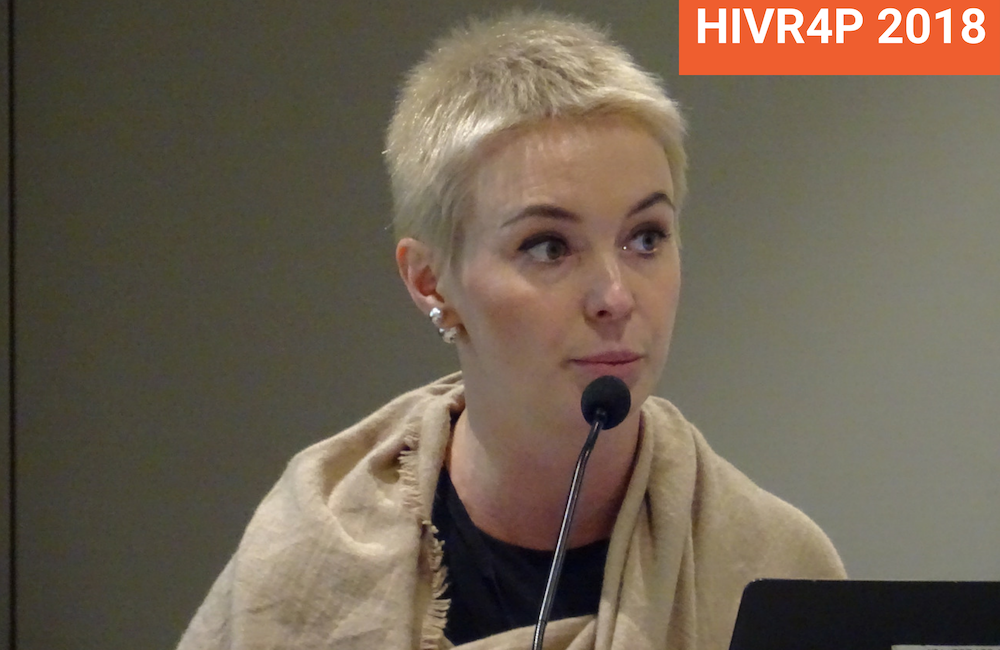 Olga Denisiuk at the PrEP symposium at HIVR4P 2018. Photo by Gus Cairns.

Many more gay men and men who have sex with men (MSM) may be using pre-exposure prophylaxis (PrEP) than figures from demonstration projects and national rollouts suggest, Michelle Rodolph, technical officer for the World Health Organization, told the HIV Research for Prevention conference (HIVR4P 2018) in Madrid in Spain on Monday.

Rodolph outlined the same statistics on known PrEP use that AVAC also presented in another session already reported: that there are known to be about 300,000 current users of PrEP, 70% of them in the USA.

However, she added, this number may be considerably exceeded by people taking PrEP informally who are buying the generic drugs from online suppliers or elsewhere. Rodolph pointed to an article from China Daily last year which suggested that, anecdotally, large numbers of gay Chinese tourists were buying PrEP in Thailand. China has not licensed tenofovir/emtricitabine for prevention but Blued.com, its largest gay dating website with 23 million users, has reported an upsurge of interest in PrEP.

“PrEP is available online everywhere,” she emphasised, “and its use is not monitored”.

What about PrEP use by other populations vulnerable to HIV? Rodolph commented that this has been slow to take off but that after a few early schemes produced little interest and low retention among female sex workers, PrEP in now “starting to gain traction” among women in some African countries (other than Kenya, where 25,000 people are already on PrEP).

In South Africa, she commented, an initially slow roll-out is starting to gain momentum and providers are starting to see “an impact beyond PrEP” in terms of it being an incentive for female sex workers to seek out other services such as HIV and STI testing, other prevention resources such as condoms, cervical cancer screening, contraceptives and help with gender-based violence. She commented that “full PrEP” programmes needed to be designed from the start that could offer these resources, and their impact assessed.

In Zimbabwe, which has seen “increasing interest and use” among female sex workers, this may be what is beginning to happen, as PrEP has been added to a comprehensive national programme for female sex workers, Sisters with a Voice, which has already seen increases among its service users in relation to condom use with regular partners, frequent HIV testing and use of antiretroviral therapy (ART).

Programmes for other adolescent girls and young women are only just starting, however, with relatively limited uptake so far, and use of PrEP among transgender women and men is hard to gauge because too few national HIV surveillance programmes treat them as separate populations.

PrEP is still being met with resistance from conservative policy makers, she added, and national targets bear little relation to the size of the population in need. For instance, tiny Lesotho with 320,000 people with HIV has set a target of 25,000 people in the general population on PrEP, whereas huge Nigeria, with nearly 100 times the population and 3.1 million people with HIV, is only currently planning a small pilot providing PrEP to up to 700 serodiscordant couples.

“I do not think serodiscordant couples are Nigeria’s biggest population in need of PrEP,” Rodolph commented, “but they are probably the most politically acceptable one to start with.”

Barriers to PrEP still remain to be overcome

Other speakers at the PrEP symposium spoke of the barriers that continued to slow access to PrEP. In the USA, the country with by far the highest PrEP uptake, the persistent inequalities of the healthcare system continue to mean that PrEP is not reaching those who need it most.

Retention continues to be a huge challenge. Annual retention in different US programmes at large is 43-64%, and in one programme in Atlanta, while two-thirds of white MSM and just over half of black MSM referred for a PrEP consultation started it, by the end of a year only 10% of white men and hardly any black men were still taking it.

In other countries, both political and structural conservatism have led to slow uptake of PrEP. In Brazil, 5050 MSM and transgender women have so far started PrEP in the country’s national programme, and there are people on PrEP in 21 of Brazil’s 27 states. Uptake is slowly increasing since the PrEP programme started in January this year, with 786 people starting in September, twice the number who started in February.

But Beatriz Grinsztejn of Brazil’s National Infectious Disease Institute said that a failure to integrate the PrEP programme with the existing HIV treatment programme was slowing down the PrEP programme. It had been planned that people could be prescribed PrEP the day they first visited a clinic and took an HIV test, but with this not being the practice for ART when people are diagnosed in Brazil, it was not being followed. She also expressed trepidation about what would happen to the programme if the right-wing politician Jair Bolsonaro was elected as president.

In eastern Europe there have only been a couple of small implementation studies. Olga Denisiuk of Ukraine’s Alliance for Public Health said that while a small demonstration project giving PrEP to 100 MSM in Kyiv was still ongoing until March 2019, plans for a much larger pilot programme offering PrEP to 2900 people, about half MSM and half other at-risk persons, with drug jointly funded by PEPFAR and the Global Fund, were still on hold pending more funding for monitoring tests and also staff and community training and support.

Denisiuk told aidsmap.com that one of the issues was establishing the necessary network of sympathetic and knowledgeable healthcare professionals to administer the programme. Much of ART prescribing has been done by primary care physicians in Ukraine but not all are sympathetic to the idea of PrEP and establishing a network of “friendly doctors” – similar to the network of HIV doctors already supported by the Elton John AIDS Foundation – had been part of what was necessary to put in place before the larger programme could be started.

She said that she was still optimistic the necessary funding would be secured, but that rollout outside of Kyiv would probably have to take place slowly and one town at a time, as healthcare staff in different areas were trained to administer PrEP.

Use of antiretroviral treatments to prevent HIV infection – called pre-exposure prophylaxis or PrEP – is very low among high-risk populations with poor access to HIV care, especially Black men in the South who have sex with men. That’s the main finding of our new study), which suggests public health officials will need to do more outreach to this population if they hope to end the HIV pandemic by 2030.
The Conversation
2 Dec 21
PrEP programmes & uptake

Healthcare providers admitted to feeling ill-prepared for the massive PrEP roll-out in Kenya. They felt bombarded with targets without enough training or consideration of the increased workload. A year later they seemed less combative, but more passive about PrEP programming. Rather than proactively driving demand, they preferred that potential users present themselves to the facility and ask for PrEP.
AllAfrica
29 Nov 21
PrEP programmes & uptake

The Long-Term Prognosis of PrEP (video)