Advocates for PrEP and vaginal rings need to learn from the experience of introducing male circumcision, female condoms and PMTCT
Roger Pebody 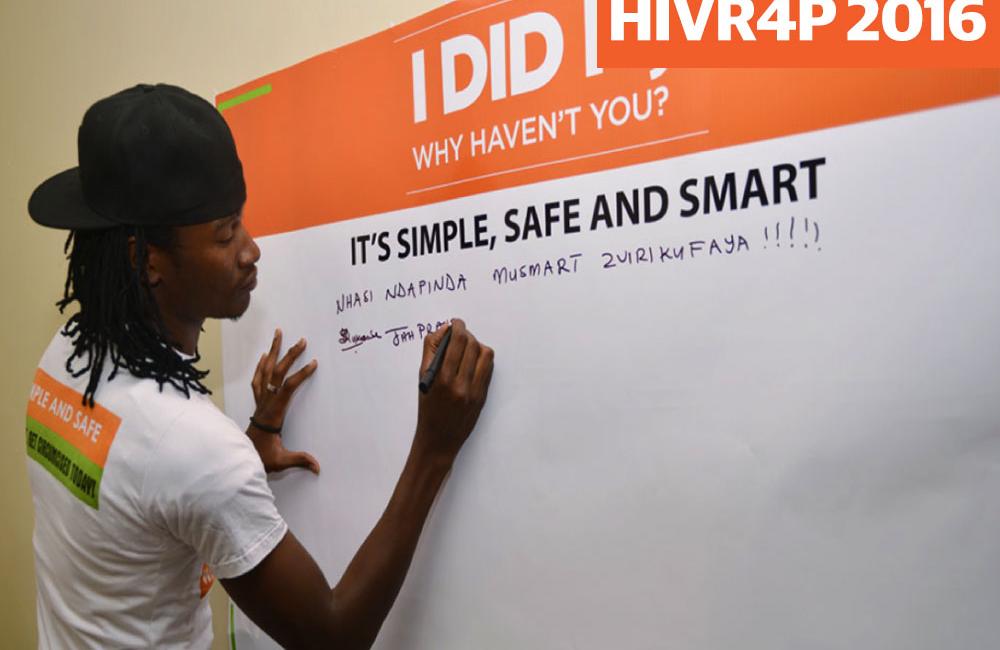 Popular Zimbabwe musician Jah Prayzah signing the Pride Board at a male circumcision site as part of a PSI campaign. Image credit: PSI

There is a naivety among many HIV prevention researchers and advocates about the steps needed to introduce and implement new HIV prevention technologies such as oral pre-exposure prophylaxis (PrEP), vaginal rings and vaccines, according to speakers at the HIV Research for Prevention (HIVR4P 2016) conference in Chicago last week. Developing an effective prevention method is the easy part, they suggested – ensuring the product reaches end users can be more challenging.

Although conferences tend to pay little attention to well-established prevention interventions such as male circumcision, female condoms and programmes to prevent mother-to-child transmission (PMTCT), there are lessons to be learnt from their implementation, speakers said.

In each case, concerted efforts, marketing insights and functional health systems have been required to bring the interventions to scale. When these have been absent, coverage has been limited.

Karin Hatzold of Population Services International (PSI) described lessons learnt from the introduction of voluntary medical male circumcision in African countries. The procedure has been recommended by the World Health Organization and UNAIDS since 2007, but implementation has been patchy. While just under 12 million boys and men had been circumcised in 14 priority countries by the end of 2015, this was only 56% of the global target that had been set for completion by that time.

Focusing on Zimbabwe, she said that a 2013 survey showed that 68% of men were aware of circumcision as an HIV prevention method, 66% were interested in circumcision for themselves and 64% said they intended to get circumcised – but only 11% had actually been circumcised.

PSI used qualitative research and insights from marketing in order to examine why there was such a large gap between intention and action. Through this they developed a model to outline the path that men undertake on their journey to circumcision and to identify possible marketing interventions.

This highlighted that even after men had learnt about male circumcision and made an internal commitment to be circumcised, another stage followed in which men anticipated the procedure and the healing process. Men often experienced ‘cognitive dissonance’ between their belief in the long-term benefits of circumcision (protection from HIV and sexually transmitted infections [STIs]) and concern about its short-term consequences (pain during healing, abstinence from sex and time away from work). This dissonance is strongest in adult men and is less common among adolescents.

Quantitative surveys were used to segment the male population of Zimbabwe according to their needs, attitudes and behaviours in relation to male circumcision.

Twenty-one per cent of uncircumcised men were described as circumcision ‘enthusiasts’. They believe in the procedure’s benefits but still have some anxieties. This group has the greatest potential for interventions, as they are ready to go for circumcision, but need some additional support to overcome cognitive dissonance. They may be influenced by peers and social pressure.

Nineteen per cent of uncircumcised men are described as circumcision ‘neophytes’. They have not yet decided whether they want to be circumcised or not. They have a need for more information about circumcision and interventions to strengthen motivation.

Seventeen per cent are seen as ‘embarrassed rejecters’. They have mostly negative attitudes towards circumcision and minimal motivation. The attitudes of their peers could have the greatest influence on them.

Other population segments are ‘scared rejecters’ (16%) and the ‘highly resistant’ (22%). As there is less potential to convince these groups, they are a lower priority for interventions. There is also a group of men who have positive attitudes to circumcision like those of the ‘enthusiasts’ but who are less open to social pressure. As this is only 6% of uncircumcised men, they are also not a priority for interventions.

The research suggested interventions which can help Zimbabwean men move along the path towards circumcision. Outreach workers and marketing materials now provide honest and detailed information about the procedure and healing process, so as to more effectively deal with anxiety and cognitive dissonance.

In order to counteract short-term negative consequences, some more immediate benefits are now more clearly communicated. As well as better hygiene, there is also a focus on sexual appeal to female partners. Women may be more sexually satisfied, due to intercourse lasting for longer.

Enthusiastic clients who have already been circumcised are encouraged to act as advocates for the procedure, so as to tap into the influence of peers and to provide social support for men considering the intervention. Marketing materials have been created to help trigger these kind of conversations.

Bertran Auvert of the French National Institute of Health and Medical Research also outlined challenges and successes in promoting male circumcision. His example came from Orange Farm, a township near Johannesburg, South Africa, where the proportion of adult men circumcised rose from 13 to 55% in the three years from 2008, but then stopped rising. As in Zimbabwe, he said that the challenge was not to convince men of the benefits of circumcision, but to help men take the final step and attend a circumcision clinic.

An intervention he and his colleagues have recently piloted started with household visits, in which men were offered one-to-one discussions based on the motivational interviewing technique (a goal-orientated style of counselling, which aims to help clients overcome ambivalence). Men could have up to three sessions, but most decided to be circumcised after one motivational interview of around an hour.

Financial compensation of around USD$18 (equivalent to two or three days’ wages) was offered to compensate for the time the procedure and its recovery takes. This support was only offered during the nine-week period in which the pilot was run – the deadline also incited men to take action.

Examples from female condoms and the prevention of vertical transmission

Anne Philpott of the UK Department for International Development gave the example of the female condom, a product that was initially presented as a ‘magic bullet’ that would transform HIV prevention. Unrealistic expectations lead to disappointment, she suggested.

Globally, investment in female condom programming has been minimal, but there have been some success stories. Uptake of the female condom was initially low in Zimbabwe, so Population Services International redesigned their strategy. Hair salons became a key distribution point and hairdressers were given training in interpersonal communication skills, so that they could explain the benefits and demonstrate the use of the female condom. Currently, 1500 hair salons distribute 1.6 million female condoms each year.

She pointed out that while we often assume that we need to achieve something close to 100% uptake of an intervention, just having 5% or 10% of people consistently using an effective product can have a significant public health benefit.

Rangsima Lolekha of the Centers for Disease Control and Prevention in Thailand outlined the interventions that have succeeded in bringing down Thailand’s rate of vertical transmission from HIV-positive mothers from 24.2% in 1994 to 1.9% in 2015. As the science and international guidelines have progressed every few years, there has been a succession of policy changes. For them to be comprehensively implemented, it has been necessary to build consensus among local clinicians and local opinion leaders. Cost-effectiveness analyses and guidelines based on the Thai context have been crucial to this, she said.

During questions and answers, Chewe Luo of UNICEF noted that having Thai researchers centrally involved in the science of preventing mother to child transmission has been crucial to having buy-in within the country. But she asked whether enough was being done to ensure that the learning in one country is shared with its neighbours (for example, between Thailand and other south-east Asian countries). Strengthening networks to support south-to-south learning could help innovations be implemented throughout regions, rather than in just a few select locations, she suggested.

Timothy Mastro of FHI 360 praised the Thai example and pointed out that none of the potential prevention products discussed at the conference “will happen with any degree of coverage unless we have functional health systems”. International donors need to strengthen health systems that will be ready to deliver new interventions, rather than create new vertical systems for each innovation, he said.

Nomita Chandhiok of the Indian Council of Medical Research said that, within health systems, it was important for multipurpose technologies not to be seen as only being relevant to one issue. When female condoms have been rolled out as an HIV prevention tool, support and buy-in from family planning services has been limited. Similar issues may be faced by vaginal rings which provide HIV prevention, STI prevention and contraception.

Anne Philpott said that successful implementation required thinking about ‘the programme’ rather than just ‘the product’. Innovations should be provided through existing delivery platforms, building on existing experience. “Don’t be lured by the promise of the new,” she advised prevention researchers and advocates.

“Women at risk for HIV.” “Risky behavior.” “On the down low.” “High-risk sex.” Such phrases frame conversations about HIV prevention in terms of stigma, fear and judgment. A new initiative aims to retire the concept of risk and reframe the discussion about HIV.
POZ
8 May 22
Global health targets

NSW reported its lowest number of new HIV infections on record last year with the goal of elimination of the virus in the state now “well within reach by 2025”.
Sydney Morning Herald
21 Apr 22
HIV in the arts & media

Exploring the intellectual and emotional complexities of the generation gap between gay men who grew up in the midst of the AIDS epidemic and those who came-of-age with prophylactic tenofovir pills in easy reach, this play will provoke many valuable post-show conversations.
Bay Area Reporter
21 Apr 22
More editors' picks