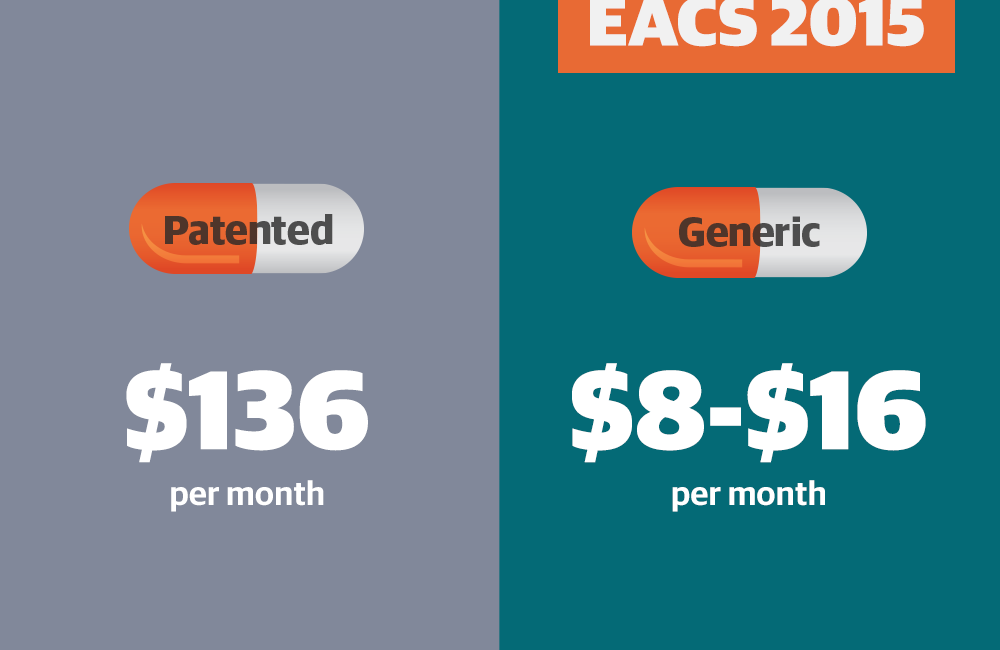 The cost of newer drugs for the treatment of multidrug-resistant tuberculosis (MDR-TB) could be cut by up to 95% if generic production of patented products could be achieved in the same way as for antiretroviral drugs, according to a study presented at the 15th European AIDS Conference in Barcelona on Thursday. Price reductions might permit a tenfold increase in the number of people who can be treated for MDR-TB within current budgets, without any new funding, the study suggests.

The cost of drugs to treat MDR-TB often run into thousands of dollars, limiting how many people can be treated and leading to further spread of MDR-TB in settings where resources are limited.

Voluntary licensing and the historical lack of restriction on generic production of some older antiretroviral drugs has permitted the price of antiretroviral drugs to be driven down from over $10,000 a year prior to 2000 to around $140 a year today, due in large part to the size of the market. This has encouraged generic manufacturers to invest in manufacturing generic products, because they see a guaranteed market that is profitable even at a very small profit margin.

The lack of new drugs to treat MDR-TB means that the newest agents developed against TB have been priced by pharmaceutical companies to recoup their investment in development. Voluntary licensing has not been pursued as a strategy to widen access, despite the large number of people who need MDR-TB treatment.

Following a methodology already employed to estimate the scope for reductions in the prices of antiretroviral drugs and antivirals for treatment of hepatitis B and C, researchers calculated the cost of the raw materials required to make TB drugs, along with the costs of synthesis, formulation and packaging, and factored in a small profit margin as is customary for generic antiretroviral drugs.

The methodology was validated for TB drugs by calculating the costs of first-line TB drugs, for which generic versions are already available. Target prices for first-line drugs estimated through this methodology matched the lowest available prices for generic TB drugs reported to the Global Drug Facility.

Current WHO guidance on MDR-TB treatment recommends using a combination of drugs from up to five different groups, combined according to local and individual drug susceptibility patterns. The researchers found that in the case of drugs from groups 1 and 2, on which patents have expired, generic prices are already very low and there is unlikely to be further scope for savings.

In the case of the group 3 drug moxifloxacin, which came off patent in 2014, there is potential for further price reduction. A generic version of moxifloxacin costs $232 per month in the United States, compared to $38 a month in France, but the research group estimates that even if demand for a generic were low, it would be possible to bring the price down to $9 a month.

It is drugs in group 5 – products either still on patent or not yet approved for use – which offer the biggest potential for price reduction.

The researchers compared the projected costs to the current lowest prices charged for these products. They found that in most cases the lowest price achievable based on the current costs of raw materials and manufacturing was at least 80 to 85% lower than the current prices charged by manufacturers. In the case of bedaquiline, it would be possible to reduce the price of the drug from approximately $136 a month to between $8 and $16 a month – a price reduction of approximately 90 to 95%. The upper range price represents the price likely to be achievable if demand is low (>100,000 treatment courses per year), and the lower range the price if demand reaches 1 million treatment courses per year.

These prices have the potential to substantially reduce the cost of several experimental MDR-TB regimens currently being tested in clinical trials. For example, the cost of experimental bedaquiline-containing regimens soon to be tested in two arms of the STREAM study could be reduced from approximately $1834 for a 40-week course to between $252 and $364, while a 28-week course could fall in price from approximately $1343 to between $176 and $257 for a course of treatment.

However, in order to achieve these savings, say the research group, patent barriers to generic production will need to be overcome, especially in middle-income countries, and demand for new drugs to treat MDR-TB will need to be increased in order to encourage generic manufacturers to develop versions of these agents. The savings implied by the model assume that it will be possible to negotiate bulk purchases for very large quantities, rather than placing multiple small national orders. Generating higher demand will require greater surveillance and case detection for MDR-TB, but not necessarily more money. Dr Hill pointed out that it would be possible to increase the numbers treated for MDR-TB tenfold within existing budgets if these price reductions could be achieved.