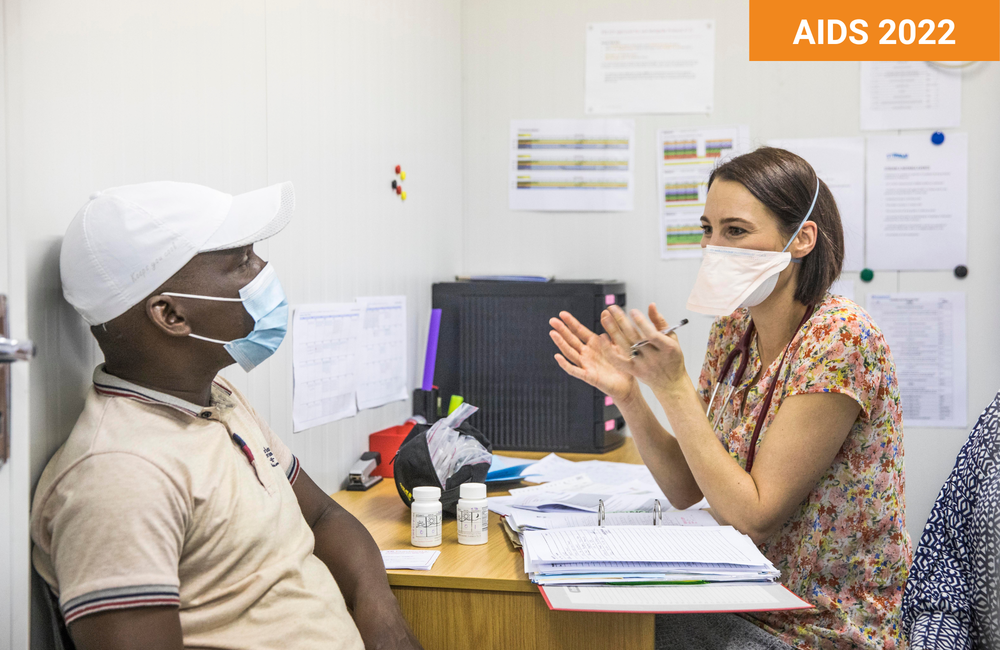 Dr Louisa Dunn, a sub-investigator on the TB PRACTECAL clinical trial consults with a patient in South Africa. Photo by MSF.

An all-oral treatment regimen for multidrug-resistant tuberculosis (MDR-TB) recently recommended as a new standard of care by the World Health Organization is effective and safe in people living with HIV, Dr Ilaria Motta of Médecins sans Frontières reported at the 24th International AIDS Conference (AIDS 2022) in Montreal on Sunday.

However, activists at the conference say that all-oral treatment remains out of reach for many people in the worst-affected countries, as they launched the 1 / 4 / 6 x 24 campaign to galvanise public health programmes into investing in sufficient “staff, stuff, space, systems, and support” to make new shorter regimens for TB treatment available to all by 2024.

MDR-TB requires a longer treatment course than drug-sensitive TB, especially in people who have TB resistant to multiple antibiotic classes. Treatment of MDR-TB has required the use of drugs with serious toxicities as well as injectable drugs in order to achieve a cure, and treatment with older regimens may last up to two years. The length and toxicity of treatment has led to a high failure rate when people cannot tolerate or adhere to treatment, often leading to the development of extensively drug-resistant (XDR) TB.

Over the past decade there have been intensive efforts to identify regimens for the treatment of MDR-TB and XDR-TB that avoid the use of injectable drugs, reduce the cost of treatment and minimise exposure to toxic drugs.

TB PRACTECAL was a large, randomised comparison of three 6-month all-oral regimens for the treatment of MDR-TB, with a control group that received the World Health Organization standard of care, consisting of a 9- to 24-month course of treatment combining oral and injectable treatments depending on local guidelines.

Antiretroviral therapy in participants living with HIV was modified to avoid drug interactions and in most cases, participants took integrase inhibitor-based treatment.

The trial was carried out in Belarus, Uzbekistan and South Africa.

At IAS 2021, the ZeNIX trial reported that the three-drug BPaL regimen was highly effective in curing MDR-TB in highly drug-resistant and XDR-TB. It showed that shortening exposure to linezolid improved tolerability without compromising efficacy.

The primary results of TB PRACTECAL were presented at the Union World Conference on Lung Health in 2021 and Conference on Retroviruses and Opportunistic Infections in March this year, showing that BPaL plus moxifloxacin treatment resulted in the lowest rate of unfavourable outcomes and the largest positive difference in outcome between an experimental treatment and the standard of care.

In May, the World Health Organization issued guidance recommending the use of BPaL plus moxifloxacin or BPaL as the preferred standard of care for treatment of MDR-TB or rifampicin-resistant TB.

People with HIV were evenly distributed between study arms. The median CD4 count across study arms was around 300, approximately 40% were female and around two-thirds had smear-positive TB at baseline. Fluoroquinolone resistance, indicating a case that is especially hard to treat with standard therapy, was present in just under 20% of all participants and around 10% of HIV-positive participants.

The primary study outcomes were the proportion of participants in each study arm who had unfavourable outcomes at week 72 after randomisation, and the proportion who experienced a serious adverse event or grade 3 adverse event by week 72. An unfavourable outcome was classified as death, treatment discontinuation, treatment failure, recurrence of MDR-TB or loss to follow-up.

Similarly, the risk differences between HIV-positive and HIV-negative participants in the other investigational study arms were not statistically significant, but again, the investigators caution that numbers are too small to draw a negative conclusion.

The clofazimine-containing experimental regimen was less well tolerated than BPaL or BPaL/moxifloxacin; 29% of HIV-negative people and 40% of people with HIV experienced a grade 3 or higher, or serious adverse event. Grade 3 or higher, or serious adverse events were least common in the BPaL/moxifloxacin arm in both HIV-negative and HIV-positive participants, occurring in 20% and 17% respectively.

There was no significant difference in the rate of adverse events between HIV-positive and HIV-negative participants in any study arm. The most commonly observed serious adverse events (grade 3 or higher) were hepatic disorder, anaemia and neutropenia.

Recent advances have made it possible to treat TB infection in as little as one or three months and most forms of drug-sensitive and drug-resistant TB in four and six months, respectively (the 1 / 4 / 6 in the campaign name). Yet virtually no one has access to these shorter, more potent regimens.

Treatment Action Group, Partners in Health and Médecins sans Frontières launched the 1 / 4 / 6 x 24 campaign at AIDS 2022. The campaign is calling for:

Further information on campaign priorities and outstanding research questions has been published by Treatment Action Group.

Update: some details of the dosing, outcomes and baseline characteristics were corrected on 3 August 2022.