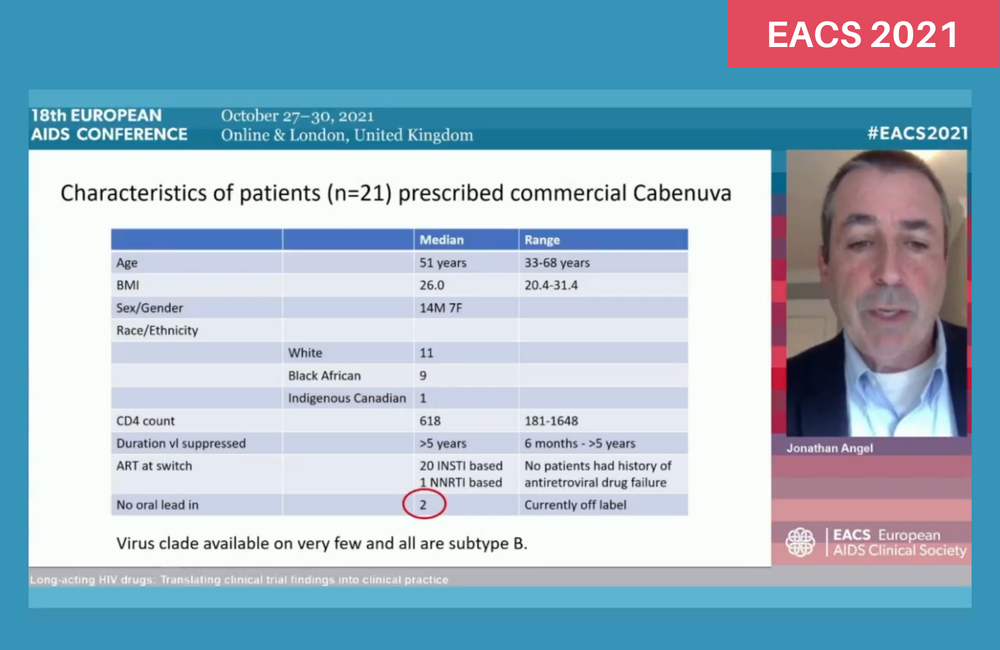 Dr Jonathan Angel, an HIV physician and researcher at the University Hospital of Ottawa in Canada, is one of the first doctors in the world to prescribe the injectable formulation of the drugs cabotegravir and rilpivirine, not as part of a clinical trial, but in standard medical practice.

Canada was the first country, in March 2020, to license the long-acting antiretroviral treatment, for injection every two months. In North America it is sold under the brand name Cabenuva. In Europe, which licensed the treatments almost a year ago, the two drug formulations have the separate brand names of Vocabria and Rekambys.

Licensing simply says doctors can prescribe drugs. It is different from national healthcare services agreeing to include them in the national registry of available drugs, which happened in September 2020 in Canada. And it is different again to paying for them. In Canada most people benefit from a publicly funded, single-payer healthcare system similar to those in Europe, but 10-20% of people also have private health insurance, and at present it is only this minority for whom Cabenuva can be reimbursed. The insurance companies agreed reimbursement arrangements in March 2021 and from then on the drugs could be prescribed in regular clinical practice.

Dr Angel told the 18th European AIDS Conference (EACS 2021) that so far he had prescribed the injections to 21 patients and that 16 have actually started the therapy.

The reason five have not is that they are waiting to complete enrolment in a third-party scheme called Cabenuva Supports which actually administers the injections. This programme is supported by the injectable drugs’ developer, ViiV Healthcare. The injections are administered by nurses off-site, in primary care clinics, pharmacies or in people’s homes.

Although the experience and capacity of all clinics is different, Dr Angel said that administering injections every month or two to a significant number of patients would be an extra burden on any busy outpatients’ department.

Dr Angel said that his clinic had five years’ previous experience of administering injectable cabotegravir/rilpivirine as part of the clinical trials that showed they worked – LATTE, ATLAS, FLAIR, and ATLAS-2m. A number of his patients had taken part in these trials and 20 were still in long-term follow-up. He said he had found it impossible to predict which patients would express a serious interest in switching to injectable therapy: apart from simply preferring injections, their reasons were very individual and often multiple. “When made aware of injectable therapy, patients will select themselves,” he said.

The studies showed that the injectables were as good as a standard, dolutegravir-based oral therapy at keeping patients virally suppressed, with 1.6 to 2.1% of patients, depending on the study, failing to achieve viral suppression (a viral load of under 50) at the study endpoints.

Dr Angel said that there were only 13 virological failures out of 1039 participants in all three trials and that ten of these had a combination of three factors: obesity (BMI over 30), pre-existing resistance to rilpivirine, and/or having HIV subtypes A1 (common in east Africa) and A6 (the predominant subtype in Russia). This suggests that patients coming forward for cabotegravir/rilpivirine should be tested for pre-existing susceptibility to developing resistance.

However, Dr Angel said that as his patients were all on treatment and virally undetectable when they switched, testing for resistance would require expensive and complex proviral DNA genotyping. Also, subtype A is very rare in Canada.

The average age of the patients who have started or are about to start Cabenuva is 51, about the same as the mean age of all patients at the Ottawa clinic. But one-third are women, which is a higher proportion than in the patient group generally, and nearly half were non-White. All had undetectable viral loads and all but one had been on a previous integrase inhibitor-based regimen.

Once patients have decided to switch and their injectable regimen has been prescribed, it is currently taking up to a month before they start. This is partly due to phone calls setting up arrangements with the Cabenuva Supports scheme, but most of the time is taken up with settling reimbursement arrangements.

Most patients have chosen to have an oral ‘lead-in’ of four weeks of cabotegravir and rilpivirine pills. This was originally developed in case patient had adverse reactions to either drug, as once given as injections they cannot be removed. However, a study presented last year found that the oral lead-in as not necessary, and two out of Dr Angel’s patients have chosen not to have an oral lead-in.

Of the 16 patients who started, one person decided to discontinue the injections and go back on to oral therapy. This was partly due to side effects – injection soreness and headache – but largely because she found arranging the injection appointments inconvenient. Dr Angel added that four patients involved in the clinical trials had also dropped out due to ‘injection fatigue’, showing that this new way of giving people antiretroviral therapy is not for everyone.

One interesting possible use of the injectables would be as temporary antiretroviral therapy during periods when oral pills were inconvenient or might raise concerns about unwanted disclosure of HIV status – so-called ‘holiday injections’. Dr Angel said a couple of patients has already enquired about this.

UK activist Angelina Namiba commented that they would be useful for spells in hospital too. During a recent period where she had been hospitalised and could not take solid food, the nurses had had to crush her HIV pills into drinks for her. An injection would have been ideal in this situation.

Other panellists and audience members commented on specific issues yet to be explored about the injectables. One was drug-drug interactions, as their dosage could not easily be adjusted. An example is TB treatment, where doctors were used to increasing patients’ dosage of oral antiretroviral drugs while patients were on rifampicin, a drug that induced liver enzymes and caused faster elimination of antiretrovirals.

Dr Marta Boffito of London's Chelsea and Westminster Hospital, in a talk in the same symposium, outlined the other new long-acting drug technologies in development. aidsmap.com has reported on islatravir and lenacapavir – drugs with half-lives so long that they could be given as implants once a year or subcutaneous injections twice a year. But new ways of delivering existing drugs are under development. Gilead are developing a biodegradable implant containing tenofovir alafenamide (TAF) which has already been successfully used as PrEP in monkey studies. Johnson and Johnson are developing a rilpivirine microarray – a patch containing the drug absorbed into tiny subdermal fibres that could be worn on the skin.

“We are just at the beginning of using these technologies,” Dr Angel commented, “and we will come across other clinical and practical issues as more patients use them. They won’t necessarily solve ongoing poor adherence, because patients can miss injections too. But there is no doubt a large proportion of patients will want them.”