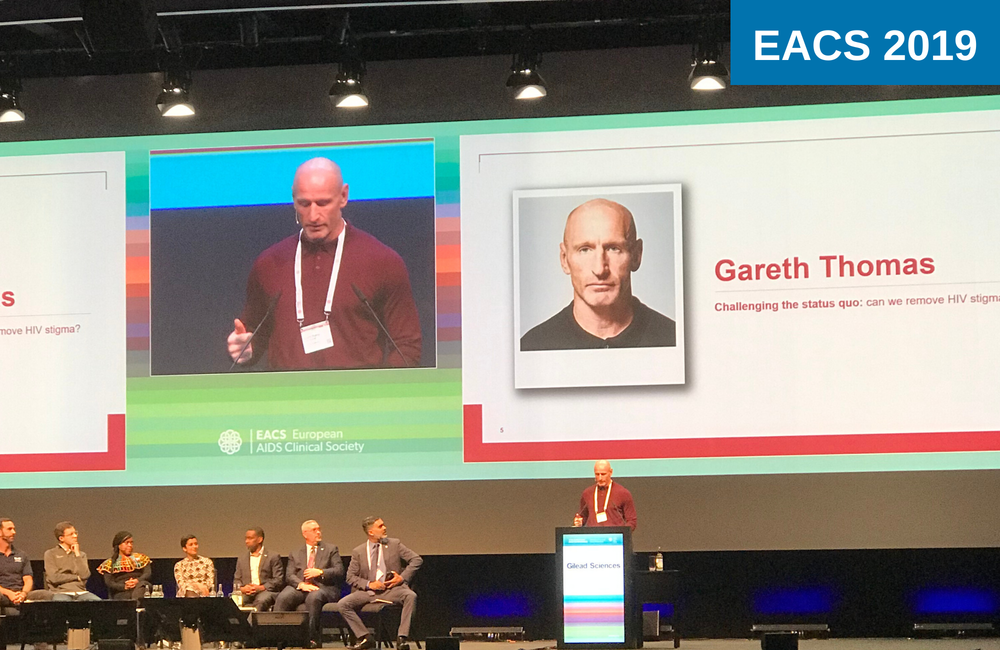 In his first public speech since announcing that he is living with HIV in September, Wales rugby star Gareth Thomas spoke of the need to confront HIV stigma, at the 17th European AIDS Conference (EACS 2019) in Basel, Switzerland.

He spoke at a symposium organised by Gilead Sciences on the conference's opening day.

He spoke of his shame and regret after learning of his HIV diagnosis, “and a horrible sense of isolation – the sense of shame grew every day”, he said, as he realised that he could not be honest with family, friends and colleagues.

“One day as I was walking on the cliffs near my home, I had a phone call from my parents saying they had a journalist on their doorstep asking them to make comment on the fact that I was living with HIV.

Thomas’ documentary, Gareth Thomas: HIV and Me was broadcast on BBC1 on 18 September 2019. Thomas revealed his HIV status online on 15 September, immediately before completing the 140-mile International Iron Man triathlon in Wales.

“I wanted to challenge stigma head on. I wanted people to see that I was capable of swimming two-and-a-half miles in the sea, cycling 112 miles and running a marathon with HIV. If I can do that, we can do anything. I had nothing but support and love. I challenged people on that day not just to show their reactions to people living with HIV but their reactions to people who are being honest about their vulnerability.

“That day we took a small step towards educating, and breaking stigma. Also, on that day, I took a road that I’d spent many years trying to avoid, only to realise that it was probably the road to my destiny.”

Professor Chloe Orkin of the British HIV Association said on Twitter, "He has made such a difference to my patients. They tell me all the time how he has empowered them to talk about HIV."

U=U—undetectable = untransmittable—is a powerful public health intervention. However, Thailand has also conceived of this strategy as a tool to combat stigma and discrimination in healthcare settings and for the wider public.
UNAIDS Asia-Pacific
12 Dec 22
Global health targets

The partnership will drive progress on the historic 10-10-10 HIV targets, which call for transformative action to reduce stigma and discrimination and remove punitive laws and policies impacting people living with HIV and other key populations.
United Nations Development Programme
5 Dec 22
UK health services

The report reveals progress toward easing HIV stigma, through increasing knowledge, comfort, and greater understanding that HIV can be treated to the point of being undetectable and therefore untransmittable (U=U) and the importance of PrEP for prevention.
GLAAD
1 Dec 22
HIV in the arts & media