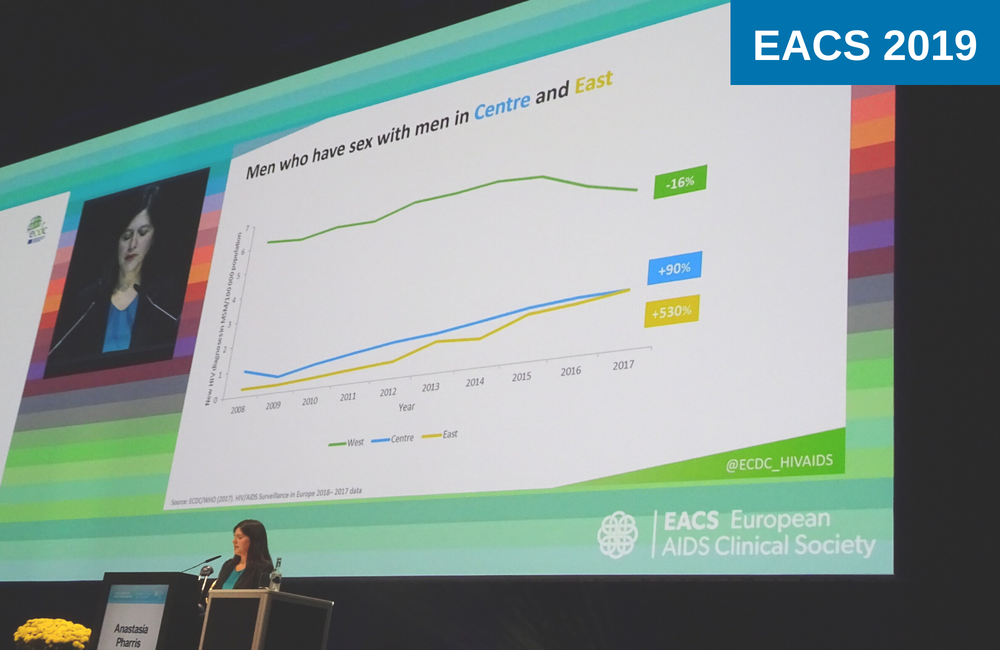 The 90-90-90 targets for HIV diagnosis, treatment and viral suppression will be missed in much of eastern Europe due to poor access to HIV treatment, the 17th European AIDS Conference (EACS 2019) heard on its opening day in Basel, Switzerland.

“Only two in five people living with HIV have an undetectable viral load,” she said.

“We see a reduction in new HIV infections in men who have sex with men in some western European countries but an increase in infections in heterosexuals in eastern Europe,” said Professor Jens Lundgren of the University of Copenhagen, Denmark.

ECDC estimates that 438,000 people with HIV remain undiagnosed in the European region and the median time from infection to diagnosis is 2.9 years. Late diagnosis remains a problem throughout the European region, not helped by stigmatisation of HIV, drug use and sexuality and the unwillingness of many people to identify themselves as drug users or gay.

“In Germany we have the barrier of the signed consent form,” said Professor Jurgen Rockstroh of the University of Bonn, Germany, co-chair of the conference. “Even in countries that have achieved the 90-90-90 goal we still have the problem of late presentation, and a lot of that begins with the stigmatisation of HIV testing in general practice.”

But diagnosing HIV infection depends on testing people who have the virus. “Across the continent we probably do enough HIV tests, they’re just not targeting the right people,” Jens Lundgren said. Better targeting of HIV testing resources towards key populations would improve the yield of testing, especially in countries with lower HIV prevalence.

But for the second 90, a major gap has opened between western and eastern Europe. “The target will be missed in much of Eastern Europe,” said Anastasia Pharris. Across the region, 65% of people diagnosed with HIV are on antiretroviral treatment. Since 2015, 440,000 people have started treatment but one million people living with HIV remain untreated. Linkage to care after diagnosis is slow in eastern Europe.

As for the third 90, although 86% of people on treatment across the region are virally suppressed, due to the treatment gap, 1.2 million people are still living with unsuppressed HIV. In the 36 countries of the European region that can measure their treatment continuum of care fully, viral suppression among all people living with HIV is 44%. As a result, HIV incidence is not falling.

There are major disparities for key populations. Whereas 87% of men who have sex with men are diagnosed, 77% are on treatment and 70% are virally suppressed in the countries able to report, results are poorer for people who inject drugs. Although 90% of people who inject drugs and living with HIV are diagnosed, only 50% are on treatment and only 39% are virally suppressed.

What needs to change?

Both western and eastern Europe need to address the prevention gap – the low levels of PrEP provision, inadequate harm reduction coverage for people who inject drugs and the lack of condom provision – while eastern Europe also needs to address low antiretroviral therapy coverage if the region is to achieve the 90-90-90 targets, Anastasia Pharris concluded.

Although PrEP coverage is growing – “two years ago only one country had PrEP, now there are 17,” said Jens Lundgren – focusing on one or two prevention options is insufficient, Professor Lundgren told the conference.

Modelling by the Swiss HIV Cohort Study published in 2018 found that a combination of measures – doubling the diagnosis rate, providing PrEP and a 'test and treat' policy – would probably have the greatest impact on HIV incidence in Switzerland.

The speed of response and the maintenance of a response are also critical, Lundgren pointed out. A second modelling exercise by the same group found that the speed of introduction of harm reduction in Switzerland in the early 1990s and its maintenance throughout the epidemic had significant effects on the size of the HIV epidemic in people who inject drugs and the general population. If harm reduction had been introduced two years earlier, it would have halved the epidemic, the Swiss researchers estimated.