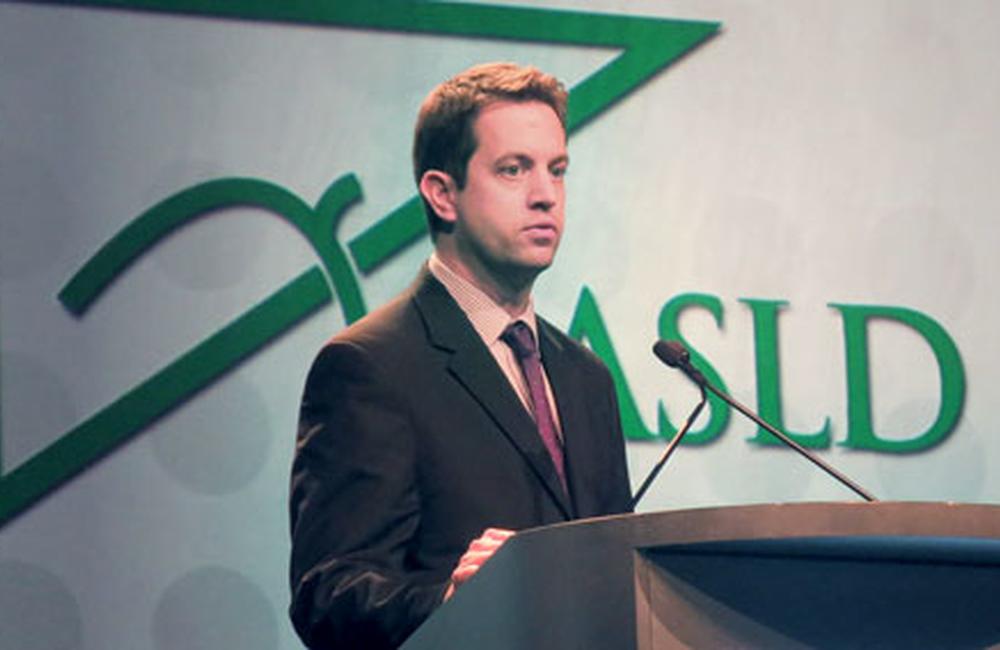 James Galbraith, speaking at The Liver Meeting 2013. Photo by Liz Highleyman, hivandhepatitis.com
This article is more than 8 years old. Click here for more recent articles on this topic

Two large studies of the 'baby-boom' generation in the United States suggest that at least 50,000 US military veterans have undiagnosed hepatitis C, and that around 80% of people with hepatitis C born between 1945 and 1965 and receiving care through four large primary health care systems could be undiagnosed. The research was presented at the 64th meeting of the American Association for the Study of Liver Diseases (the Liver Meeting) in Washington DC on Sunday.

Research presented at the conference also showed that screening of pregnant women for hepatitis C on the basis of self-disclosed risk factors would have missed almost three-quarters of hepatitis C infections in pregnant women in the United States between 2003 and 2010.

A US recommendation to screen all adults in the baby-boom generation (born between 1945 and 1965) was issued by the US Centers for Disease Control and Prevention in 2012. Implementation is uneven and will depend in part on initiatives like the recent New York state law requiring all health facilities to screen adults in this birth cohort from January 2014, as well as on funding.

Several studies presented at the conference looked at the potential yield of more comprehensive age-based screening in various settings.

US military veterans of the baby-boom generation form a population at higher-than-average risk of hepatitis C. Hepatitis C prevalence is higher in adults born between 1945 and 1965 due to higher levels of injecting drug use and greater lifetime risk of exposure to blood transfusions containing hepatitis C compared to those born after 1965.

Veterans may be at especially high risk of hepatitis C infection due to high levels of injecting drug use among the population that served during the Vietnam War era and blood exposure in battle or medical settings. Tattooing and transmission through use of airguns for vaccination during military service are difficult to quantify as sources of infection, but many veterans – particularly those who did not see active service in Vietnam – believe these routes explain their infection with hepatitis C.

Furthermore, the Veteran’s Health Administration (VA) medical system may have an especially high prevalence of hepatitis C among its patient population because it has tended to retain in care veterans who have sought treatment for substance abuse through the VA system.

Lisa Backus of the Veteran Affairs Office of Public Health presented an analysis of the proportion of veterans receiving care through VA system who might remain undiagnosed.

The VA examined its database of 5.5 million veterans in care to determine what proportion of patients who attended a medical appointment in 2012 had been tested for hepatitis C between 1999 and 2012. The VA began risk-based screening for hepatitis C following a CDC recommendation in 1998.

Hepatitis C prevalence among newly-screened veterans declined with each year – suggesting that those at greatest risk would have been tested earlier – from 33% in 1999 to 5.7% in 2012.

Based on these rates of infection, the researchers estimated that if the remaining 905,000 veterans in the 1945 to 1965 birth cohort underwent hepatitis C testing, an additional 51,000 veterans with hepatitis C would be identified.

Two other studies presented at the conference showed higher than expected prevalence of hepatitis C infection among emergency room attendees, among pregnant women and among adults in primary care, and demonstrated that relying on self-disclosed risk factors alone to prompt hepatitis C testing would result in the majority of infections going undiagnosed.

In many settings, the emergency room may be the only site where adults – especially men – come into contact with health services, especially if they are uninsured or have no entitlement to free health care. Studies in the United States and Europe have shown that emergency health care services often provide health care for people who are otherwise disengaged from the healthcare system.

Emergency rooms also provide initial care for a disproportionate number of older people who present with acute conditions such as heart attack and stroke.

A study conducted over a two-week period by the University of Alabama Birmingham in an emergency room in Alabama set out to provide a snapshot of the prevalence of undiagnosed hepatitis C infection among the 1945 to 1965 birth cohort.

During the study period, 874 baby boomers were admitted, of whom 565 were willing or able to give consent for hepatitis C testing. Twelve per cent tested positive for hepatitis C antibodies, of whom 71% were confirmed to be chronically infected with hepatitis C.

The American College of Obstetricians and Gynecologists recommends HCV screening only in pregnant women “with significant risk factors”. Analysis of 32,426,357 deliveries or miscarriages recorded in the US Nationwide Inpatient Sample, between 2003 and 2010, identified 28,663 mothers with HCV infection. Patient records showed that in almost three-quarters of women diagnosed with HCV at the time of delivery or miscarriage (72%), no identifiable risk factors that might have prompted the offer of an HCV test were recorded in the patient’s medical notes. The risk factors analysed in this study were HIV infection, ongoing substance abuse, or haemodialysis.

The new US CDC recommendations regarding birth cohort testing are most relevant for general practitioners, since they are the main providers of health care for the vast majority of people in the United States.

To examine the scope for identifying previously undiagnosed HCV infections in general medical practices, researchers carried out an analysis of 209,076 patients from four sites who attended at least one medical appointment between 2005 and 2010. They found that 17,464 (8.4%) had been tested for hepatitis C, with a positivity rate of 6.4%. Three quarters of the patients who tested positive were born between 1945 and 1965.

Backus L et al. Hepatitis C screening and prevalence among US veterans in Department of Veterans Affairs care in 2012. 64th Meeting of the American Association for the Study of Liver Diseases, Washington DC, abstract 21, 2013.