Long-term monitoring of people with HIV with an undetectable viral load has shown that viral suppression is rarely lost, enforcing the validity of 'U=U' (Undetectable equals Untransmittable) messaging, according to Italian research published in the online edition of AIDS.  The study involved over 8000 HIV-positive individuals taking antiretroviral therapy (ART) and with viral suppression (a viral load below 200) at baseline. Regular monitoring of viral load (at least twice a year for most) showed that viral load remained suppressed 97% of the time.

However, some groups, including women, people who inject drugs and those with a past history of ART failing to control viral replication spent more time with a viral load above 200. The investigators suggest that people with these characteristics may need more support to maintain viral suppression.

“We found that in our population of people with HIV the ‘U’ status was maintained on average, for 97% of the following ten years of observation and the proportion of [time] spent in ‘U’ status showed a trend for an increase in recent years,” write the authors. “This data reassuringly suggests that U=U is an appropriate message to communicate to help decrease stigma and increase motivation to remain virally suppressed.” 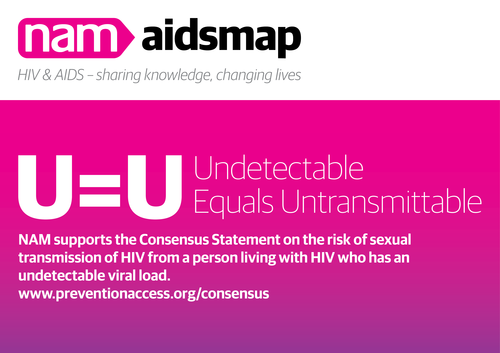 There is now overwhelming evidence that people with HIV who are taking ART and have a viral load below 200 cannot transmit the virus to their sexual partners. Since 2016, the U=U slogan has been used to communicate this information to people with HIV, their partners and people potentially at risk of the virus. Approximately 750 HIV community and prevention organisations have endorsed the principle of U=U.

However, some people have doubts about whether people in routine clinical care consistently maintain viral suppression below 200 – the threshold used in the landmark PARTNER studies that showed there were no transmissions when viral load was below this level.

Given this, a research team led by Professor Giorano Madeddu of the University of Sassari analysed data on viral suppression among ART-treated individuals in the ongoing ICONA cohort study. HIV-positive individuals taking ART and with a viral load below 200 for at least six months were included in the analysis. The study period was 2010 to 2019.

An increase in viral load while on antiretroviral treatment.

The main aim of the study was to determine the proportion of time (person days of follow-up) people maintained viral suppression. This was determined by analysing the results of consecutive viral load tests: the time interval between two consecutive viral load tests below 200 was categorised as a period of viral suppression, whereas the time between two consecutive measurements above 200 was regarded as a period of viral breakthrough. If an initial viral load result was below 200 but a subsequent measure was above this level (and vice versa), the period was divided into half – one allocated to the viral suppression category, the other to time with loss of viral control.

A total of 8241 individuals were enrolled. A fifth were women; 46% were gay men, 39% heterosexuals and 9% people who inject drugs; 25% were foreign born. At baseline, median age was 39 years and average CD4 cell count was 545. The vast majority of people – 91% – had never experienced virological failure. However, 5% had experienced the virological failure of their ART regimen between one and three times, with 4% having this outcome on more than three occasions.

During follow-up, each participant has a median of nine viral load measurements – on average each person had 2.5 viral load tests per year.

The proportion of days without viral suppression was highest in 2013, and decreased in the years that followed. It was higher than average for women (5.3%), individuals who were foreign born (5.4%), the unemployed (5.4%), people who inject drugs (4.7%) and individuals with more than three previous episodes of viral breakthrough (6.3%). The authors note that all these factors have been shown to have an association with loss of viral control in other research and that people in these groups would benefit from extra support to maintain their 'U' status.

“U=U is an essential but straightforward campaign founded and scientific evidence. It has already influenced public opinion, reducing the stigma in people with HIV and consequently improving their quality of life,” conclude Madeddu and colleagues. “More efforts are need to be made to encourage clinicians to introduce this message during routine visits. Our data are useful to identify subpopulations…who may particularly benefit from targeted interventions.”

Madeddu G et al. Time spent with a viral load <200 copies/mL in a cohort of people with HIV seen for care in Italy during the U=U prevention campaign era. AIDS, published online ahead of print, 29 January 2021.