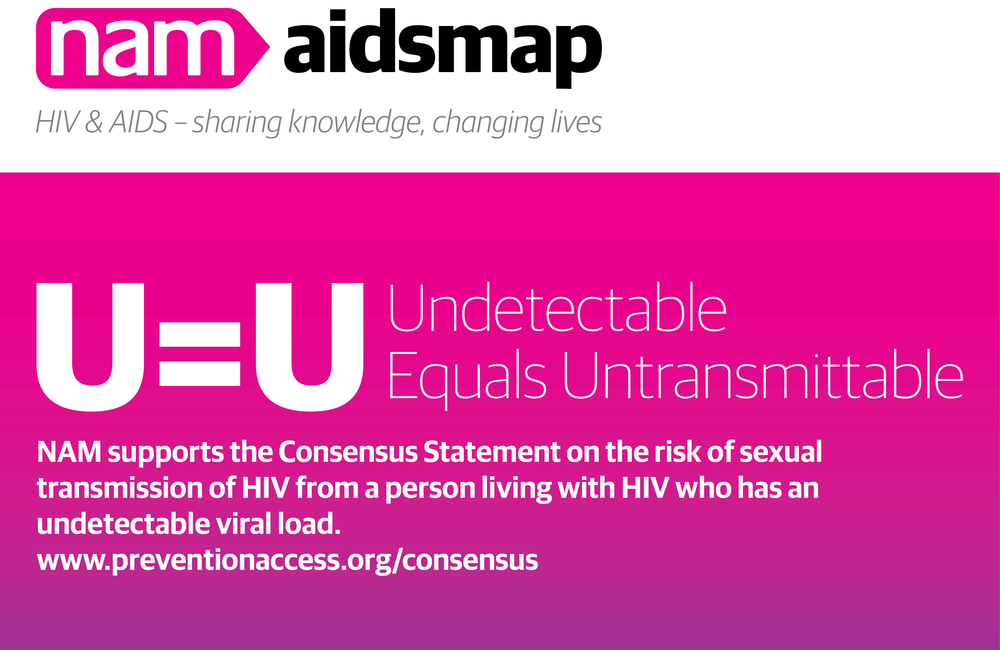 NAM aidsmap, one of the foremost sources of HIV information in the world, strongly endorses the ‘Undetectable Equals Untransmittable’ (U=U) Consensus Statement issued by the Prevention Access Campaign.

NAM’s Executive Director, Matthew Hodson, says, “The scientific evidence is clear. Someone who has undetectable levels of virus in their blood does not pose an infection risk to their sexual partners.

“In terms of HIV prevention, if condom use is safer sex, then sex with someone who has maintained an undetectable viral load is even safer sex.

“This understanding transforms the way that HIV is considered with enormous implications for what it now means to live with HIV and the best ways to prevent it. The preventative impact of effective HIV treatment underlines the importance of expanding access to treatment and of improving treatment uptake and adherence for all people living with HIV worldwide.”

Transmission risk is a major concern for people living with HIV and their sexual partners. Since the results of the PARTNER study it has been clear that the risk of HIV transmission when treatment is effective is negligible. “The fear of catching HIV from a sexual partner fuels HIV stigma, which is why it’s so important that the ‘undetectable equals untransmittable’ message is heard and understood,” says Hodson. “Condoms are not required to prevent HIV transmission when viral load is maintained at undetectable levels, although they still play an important role in preventing other STIs.”

People living with HIV on ART [antiretroviral therapy] with an undetectable viral load in their blood have a negligible risk of sexual transmission of HIV.  Depending on the drugs employed it may take as long as six months for the viral load to become undetectable. Continued and reliable HIV suppression requires selection of appropriate agents and excellent adherence to treatment. HIV viral suppression should be monitored to assure both personal health and public health benefits.[i]

Matthew Hodson continued, “Those of us with diagnosed HIV have had to live with the idea that our bodies are dangerous. This has had a profound emotional impact on many people. Many people who live with the virus face not just sexual but also social rejection as a result. In some countries having sex without disclosing HIV status is criminalised, regardless of whether there is a risk of transmission. Ignorance about transmission risk means that people are turned away from services, such as tattooists, or even denied medical treatment. No other sexually transmitted infection carries the same power to strike fear into the hearts of the population.

“People with HIV are everywhere. We are all nationalities, all races and religions, young and old, gay, bisexual and straight. When we are undetectable we are uninfectious. This means that pretty much all the fear that HIV-negative people have of those of us living with HIV is just wasted energy.”

NAM was among the first to provide accessible and accurate information about the research on the impact of treatment on transmission risk, including reports on the HPTN 052 trial and the PARTNER Study in 2011 and 2014 respectively. These stories have been some of the most popular reports on the aidsmap website. The knowledge of the impact of successful treatment on transmission risk is a powerful tool to support people living with HIV and a challenge to the stigma that people with HIV often face.

[i] An undetectable HIV viral load only prevents HIV transmission to sexual partners. Condoms also help prevent HIV transmission as well as other STIs and pregnancy. The choice of HIV prevention method may be different depending upon a person’s sexual practices, circumstances and relationships. For instance, if someone is having sex with multiple partners or in a non-monogamous relationship, they might consider using condoms to prevent other STIs.

"Serodiscordant (or sero-different) relationships are very rarely shown in popular culture, so there’s not really much to compare our own experiences with." Sydney-based HIV and bi+ community advocate, Steve Spencer, explores what modern HIV relationships in the era of U=U.
NAPWHA
28 Jan 21
More editors' picks