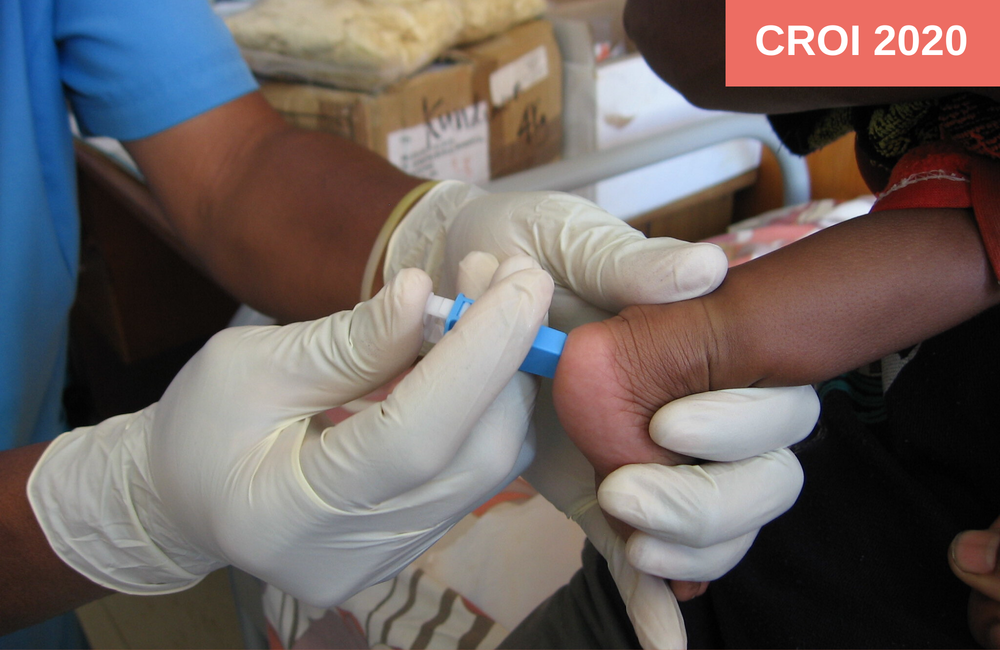 While using point-of-care assays for early infant diagnosis eliminates diagnostic delays and results in a rapid antiretroviral start, a randomised trial in Zambia found that this did not translate into treatment success at 12 months. In contrast, better clinical outcomes and better value in a Zimbabwean cost-effectiveness analysis led researchers to support the scale-up of point-of-care early infant diagnosis there.

The two studies were presented at the Conference on Retroviruses and Opportunistic Infections (CROI 2020) this month.

Infants are usually diagnosed with HIV testing performed at central laboratories. The challenges of this conventional form of early infant diagnosis (EID) are well documented, notably the significant delays in getting results to clinicians and caregivers. There are many steps in the process, including sample transport to a central laboratory, a return visit for result delivery and linkage to care or repeat testing after breastfeeding.

Devices for EID used at the point of care (POC) are simple to operate, can be used in a wide variety of settings and deliver results within 90 minutes. POC is costlier but allows for same-day results making early antiretroviral therapy (ART) start possible.

Dr Carla Chibwesha from the University of North Carolina at Chapel Hill said despite the success of Zambia’s prevention of mother-to-child transmission programme, adverse outcomes were common. She undertook a randomised trial at six district health clinics in Lusaka, Zambia to see whether a POC EID strategy improved 12-month outcomes of children living with HIV.

HIV-exposed infants were assigned between 6 and 12 weeks of age to either POC or lab-based testing (standard of care). In the lab-based arm, the trial provided a safety net of testing an archived sample should the public sector lab not return the results within four weeks.

Almost all mothers (96%) had taken ART during pregnancy and 97% of infants took ART as prophylaxis. There were 81 infants identified with HIV (37 and 44 in the standard of care and POC arms, respectively). The rate of mother-to-child transmission was low (decreasing from 3% to 2% over the study period).

Dr Chibwesha concluded that decisions to replace existing systems with POC EID must be site specific and guided by cost-effectiveness analyses. Investing in POC EID means weighing the costs of the new technology against improving existing EID systems. Most importantly, substantial investments are needed to strengthen paediatric HIV treatment programmes, she said.

A cost-effectiveness analysis of different strategies for EID in Zimbabwe was presented by Dr Nicole McCann of Massachusetts General Hospital, Boston. It found that integrating POC EID into current programmes would result in better clinical outcomes and be of better value than strengthening existing central lab-based EID systems.

Programmatic and published data from Kenya and Zimbabwe were used to inform the assumptions that the model was based on.

Other inputs for the lab model, strengthened lab model and POC model included:

The authors calculated incremental cost-effectiveness ratios (ICER) for each strategy (the difference in life expectancy divided by the difference in lifetime costs between strategies). Judged against the lab-based standard of care, the strengthened lab-based model was ‘weakly dominated’, reflecting an inefficient use of health resources. The ICER of the POC model compared to the lab model was $870 per year of life saved, meeting the threshold for cost-effectiveness in this context (under $1600 per year of life saved).

The authors conclude that unless the return time for results and probability of results being returned for the strengthened lab model can match those for POC at a lower cost, programmes should invest in point-of-care early infant diagnoses rather than strengthening existing lab-based EID systems.