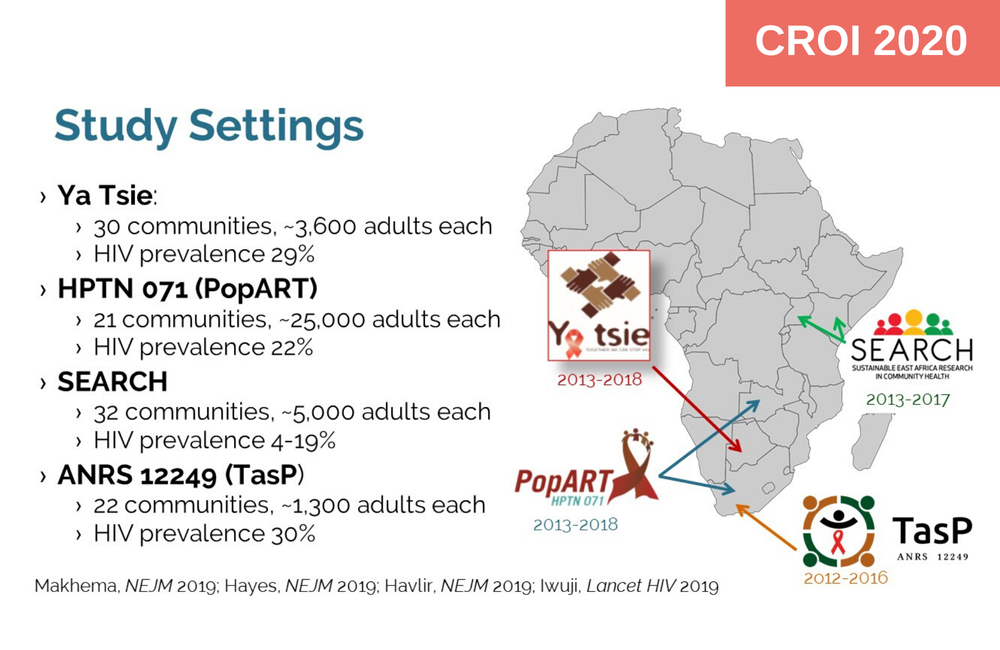 Pooled data from over a quarter of a million people, taking part in four randomised studies of ‘test and treat’ in sub-Saharan Africa, confirm that reducing the proportion of people with HIV who are virally non-suppressed reduced the rate of new HIV infections in those communities. But while the scale-up of testing and treatment was impressive, it was still not enough to halt the epidemic, the virtual Conference on Retroviruses and Opportunistic Infections (CROI 2020) was told on Monday. (All CROI 2020 presentations are taking place on the internet to minimise the risk of coronavirus transmission.)

“UTT [universal test and treat] clearly contributes to HIV incidence reduction, but incidence nonetheless remains high,” commented Dr Kevin de Cock of the Centers for Disease Control and Prevention in a plenary presentation. “90-90-90 does not result in HIV elimination and UTT will not control generalised HIV epidemics on their own.”

Between 2012 and 2018, four large cluster-randomised trials were conducted in South Africa, Zambia, Botswana, Kenya and Uganda to test the impact of universal test and treat policies on HIV incidence. The studies differed, but in each one the intervention being tested included home-based HIV testing with referral of HIV-positive participants for immediate HIV treatment.

Diverse in character or content. For example, the ‘heterogeneity’ of clinical trials means that they, and their results, are so diverse that comparisons or firm conclusions are difficult.

Their results were mixed. The ANRS 12249 Treatment as Prevention study showed that a massive scale-up of HIV testing was feasible, but linkage to care was slow and there was no benefit in terms of HIV incidence. SEARCH offered HIV testing alongside screening for non-communicable diseases and achieved very high rates of HIV diagnosis and viral suppression, but not an overall effect on HIV incidence. The Botswana Community Prevention Project led to a 30% drop in HIV infections, although this was of borderline statistical significance. PopART (HPTN 071) effectively scaled up a household-based programme and achieved a 30% reduction in one of the three study arms – but not in the arm that received the most intensive intervention.

Given ongoing uncertainties about how these results should be interpreted, the investigators of the four studies collaborated on an analysis presented by Dr Maya Petersen of the University of California, Berkeley to the conference on Monday.

She analysed data from 105 communities in order to identify any associations between viral suppression (as measured halfway through each study) and the rate of new HIV infections (incidence). The communities were from both the intervention and control arms of each study.

The communities were diverse in terms of their geography, population mobility and gender balance. HIV prevalence ranged from 2 to 40%.

The first analysis looked at the percentage of all adults in a community (whether HIV positive or negative) who were infectious (with a viral load above 400 copies/ml). This provides a measure of how likely it would be that a randomly encountered person could pass HIV on.

Communities with higher viraemia also had higher incidence. When pooled across studies, for each 1% absolute decrease in the percentage of adults with an unsuppressed viral load, HIV incidence decreased by 0.07 per 100 person-years.

The results were heterogenous and the relationship was stronger in some studies than others, but the same pattern was seen in each study.

The researchers think that these results may overestimate the impact of reducing viral load on incidence, so did a second analysis which looked at the percentage of adults living with HIV who were infectious, with statistical adjustment for HIV prevalence in the community (potentially an important confounding factor). It suggests how much we can expect HIV incidence to change if the proportion of HIV-positive people who are virally suppressed goes up or down.

This showed that for each 10% absolute decrease in the percentage of HIV-positive adults with an unsuppressed viral load, HIV incidence decreased by 0.12 per 100 person-years. After adjusting for prevalence, there was less heterogeneity between studies.

In his plenary, de Cock said that the successful achievement of the 90-90-90 targets in these studies had not translated to reductions in incidence that was as large as hoped for.

As a result, in three of the four studies (with ANRS 12249 again being the exception), over 73% of all people with HIV in the communities were virally suppressed. Modelling studies had forecast that achieving this target could end the AIDS epidemic by 2030, but the results from the four trials suggest a more complex reality.

De Cock suggested that a number of factors may explain why larger (or statistically significant) decreases in incidence had not been observed.

It may simply be that even greater reductions in community viraemia are required to achieve substantial reductions in incidence. The mathematical modelling that underpinned the UTT studies and the 90-90-90 targets may have been overoptimistic and idealistic, de Cock suggested.

He reminded the audience of the statistician George Box’s aphorism: “All models are wrong, but some are useful.”

De Cock K. Universal test and treat (UTT): lessons from the past and for the future. Conference on Retroviruses and Opportunistic Infections, presentation 18, March 2020.

View the plenary presentation abstract on the conference website.