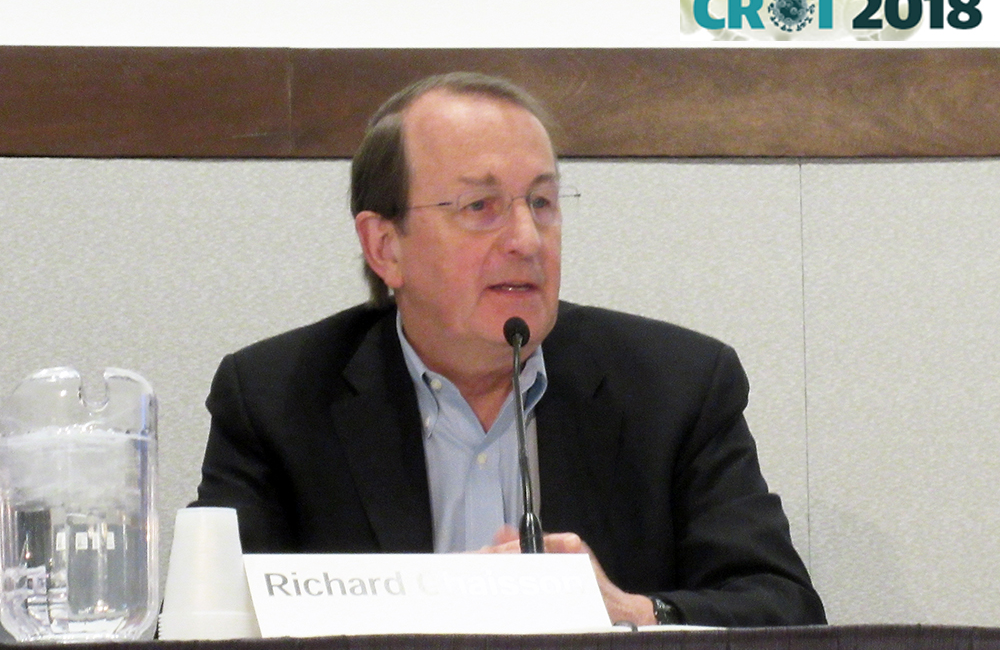 A one-month course of the antibiotic rifapentine combined with isoniazid was just as effective as a nine-month course of isoniazid in preventing the development of tuberculosis in people with HIV in a large international study presented on Monday at the 25th Conference on Retroviruses and Opportunistic Infections (CROI 2018) in Boston.

Tuberculosis (TB) remains a common cause of death in people with HIV despite the widespread availability of antiretroviral therapy (ART). Isoniazid preventive therapy (IPT) is recommended by the World Health Organization for the prevention of TB in people living with HIV.

The most commonly cited barrier to increasing IPT coverage is the six- or nine-month duration of treatment (and the World Health Organization now recommends 36 months of IPT for people with HIV in settings with a high burden of TB).

Previous research showed that a three-month regimen of isoniazid and rifapentine, given once a week, was effective in people with HIV but the regimen has been used very rarely.

HIV-positive people aged 13 years and older living in areas with high rates of TB or with a positive TB skin test were eligible for inclusion in this multicentre, randomised, open-label study. Recruitment took place at 45 sites in ten countries. Patients were permitted to take ART based on efavirenz or nevirapine.

Participants were randomised on an equal basis to take one of two TB preventative regimens: one month of daily treatment consisting of isoniazid (300mg) plus rifapentine (450-600g); or nine months of daily isoniazid (300mg). The primary study outcomes were active TB, death related to TB or death from any cause.

The aim of the study was to test the non-inferiority of the isoniazid/rifapentine regimen. Outcomes were stratified according to baseline CD4 cell count and use of ART. Data were also gathered on adverse events, treatment completion and rifampicin resistance.

The 3000 people recruited to the study had a median age of 35 years, 54% were women. As regards race/ethnicity, two-thirds were black and 24% were Hispanic. At the start of the study, 50% of people were taking ART, median CD4 cell count was 470 cells/mm3 and a fifth of people had a reactive TB skin test.

A primary study endpoint was met by 32 people in the isoniazid/rifapentine arm and by 33 people taking standard isoniazid propylaxis. Overall incidence rates were 0.65 vs 0.67 per 100 person-years, therefore showing the non-inferiority of the ultra-short course of preventative therapy.

However, incidence differed according to baseline characteristics and was higher among people who were not taking ART, though there was no difference between the two regimens (incidence rates 0.71 vs 0.74 per 100 person-years).

Incidence was also higher among people with a low baseline CD4 cell count. In these people, nine-month isoniazid had a non-significant advantage over the short-course combination regimen (incidence 1.12 vs 2.26 per 100 person-years).

Three or more serious adverse events were observed in 9% of people treated with isoniazid/rifapentine and in 7% of those taking the nine-month isoniazid regimen.

However, the incidence rate of targeted safety events (liver, gastrointestinal, neurologic, skin or hypersensitivity) was lower with the short-course combination regimen than with isoniazid nine-month treatment (incidence rate ration 1.587, 9H vs 1HP, p = 0.016).

Rifampicin-resistant TB emerged in one person in each study arm.

“We think it is a large enough, clear enough result, that it can form the basis of new guidelines.”

Apart from the speed at which guidelines can be updated, the major barriers to the use of the regimen will be cost and supply. The one-month regimen costs $72.

“The huge challenge is drug supply. There is one manufacturer, Sanofi, and there’s not a big commitment from the company to make more of it,” said Professor Chaisson. He said that he hopes to get generic manufacturers interested in making the drug so that the cost of rifapentine will fall in the next few years.

Results from the Phase 2 trial of the DAR-901 tuberculosis (TB) vaccine were announced today. The three-year trial was conducted among 650 adolescents in Tanzania, a nation with high rates of TB infection, and showed that the vaccine was safe and induced immune responses against the disease.
Science Daily
2 Oct 20
Alcohol