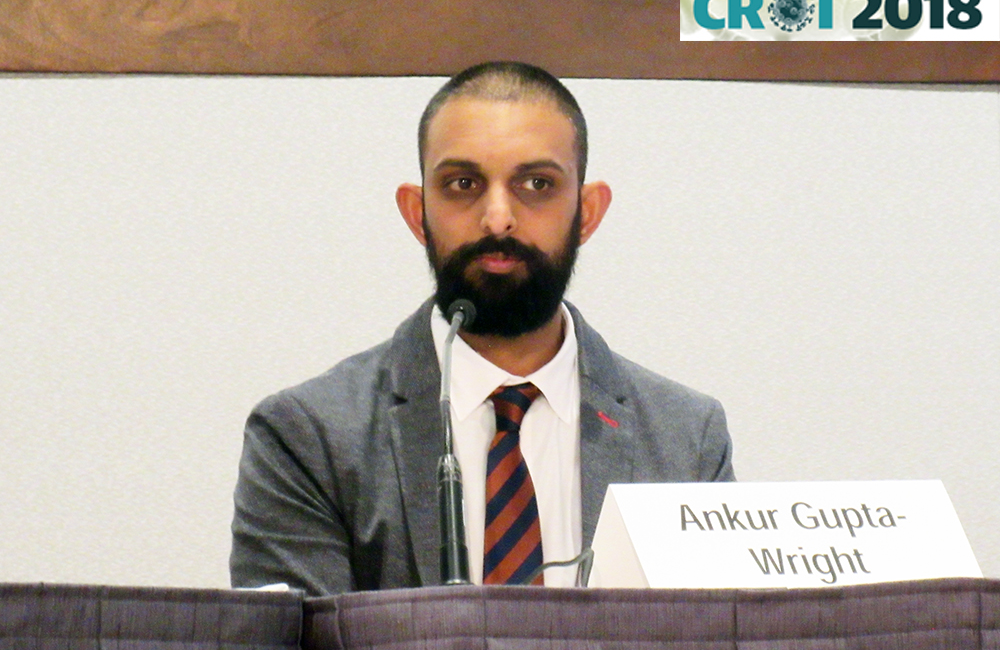 Screening for tuberculosis (TB) and intensified follow-up of TB cases in people starting antiretroviral therapy and urine-based screening of inpatients with HIV both have the potential to significantly reduce deaths and improve rates of TB treatment in people with HIV, according to results of two large studies presented at the Conference on Retroviruses and Opportunistic Infections (CROI 2018) on Monday in Boston.

Despite the introduction of earlier antiretroviral therapy (ART) and wider access to treatment in lower- and middle-income countries, people with HIV in countries with a high burden of TB still have a higher risk of dying of TB after starting antiretroviral treatment than HIV-negative people.

Over the past ten years World Health Organization (WHO) recommendations have sought to improve TB case finding among people with HIV. WHO developed a symptom screen for TB to enable cases of active TB to be identified. WHO has also recommended the integration of the Xpert molecular diagnostic platform into screening protocols, to speed up diagnosis.

Another diagnostic tool with a more limited application, a urine-based lipoarabinomannan (LAM) test, was recommended on a conditional basis for use in people with HIV with advanced HIV disease (a CD4 cell count below 100 cells/mm3) or seriously ill patients at any CD4 cell count. WHO concluded that urine-based LAM was not suitable for use as a general screening tool, either in people with HIV or other groups.

The XPRES study examined the phased roll-out of the Xpert MTB/RIF assay as a replacement for smear microscopy in the diagnosis of TB. The study compared three interventions in people starting ART:

The study recruited 14,963 patients at 22 clinics in Botswana. The standard-of-care arm was a retrospective review of 8960 people who had started ART at any of the participating centres in the two years prior to the commencement of roll-out in 2012.

The phased recruitment, dictated by the time needed to make the Xpert diagnostic equipment available to all sites, allowed the investigators to compare the relative contributions of enhanced case finding techniques and a new diagnostic technique to the reduction of TB mortality and morbidity. The primary study outcome was mortality six months after starting ART.

The investigators concluded that active tracing and intensified case finding by healthcare workers should be considered for scale-up. In this study, it was human resources rather than a diagnostic platform that seemed to make the difference when patients were followed for 12 months, suggesting that although diagnostic speed and sensitivity may make a difference in the shorter term, actions by healthcare workers to identify TB and to improve retention in care are more important in reducing the risk of death after starting antiretroviral treatment.

Rapid diagnosis of TB is essential in patients who have been hospitalised so as to ensure rapid treatment initiation. TB in advanced HIV disease is more likely to be smear negative, and more likely to present with atypical symptoms and atypical x-ray evidence, requiring TB culture to make a definitive diagnosis. TB culture requires mycobacteria to be grown in the laboratory from a sample, using specialised laboratory equipment and may take up to four weeks, or longer if drug susceptibility needs to be determined.

Lipoarabinomannan is shed from the cell wall of TB bacteria and is only present in people with active TB. Urine testing for TB-LAM has the potential to speed up TB diagnosis and its use has been shown to reduce the risk of death in hospitalised patients with HIV with CD4 cell counts below 100 cells/mm3. What is not known is whether LAM testing offers additional value in settings where the Xpert MTB/RIF test is available.

The primary outcome of the study was mortality at 56 days after admission; the secondary outcome was TB events at 56 days.

Patients in the intervention arm with CD4 cell counts below 100 also had a lower risk of death as time elapsed during the 56-day follow-up period, despite staying in hospital for a median of only six days, suggesting that they were less likely to be discharged from hospital with undiagnosed TB.

The intervention also had a higher diagnostic yield; whereas almost 40% of hospitalised patients were unable to produce an adequate sputum sample – a frequent problem in advanced HIV disease – 99% of patients were able to provide a urine specimen.

The study investigators concluded that the results of the STAMP study support urine-based TB screening for all HIV-positive inpatients, and that the benefit was not restricted to patients with low CD4 cell counts or those already suspected of having TB.

“I think there’s enough evidence now for urine-based screening to support a guideline change,” said Ankur Gupta-Wright of the London School of Hygiene and Tropical Medicine at a press briefing after the presentation of the results. He said that improved versions of the TB-LAM test, with a faster turnaround time, would soon become available, making the test suitable for use in a wide variety of settings.

Over a million additional cases of tuberculosis (TB) went undiagnosed and untreated in the last year due to the impact of COVID-19-related lockdowns, significantly setting back the global effort to end TB by a massive 12 years, according to new data.
Health-e
19 Mar 21
TB treatment

Newly available tests for rapid TB diagnosis: what you need to know

This week researchers, policymakers and activists gathered in Hyderabad, India for the 50thUnion World Conference on Lung Health. We picked six of the week’s most important stories.
Spotlight
7 Nov 19
More editors' picks