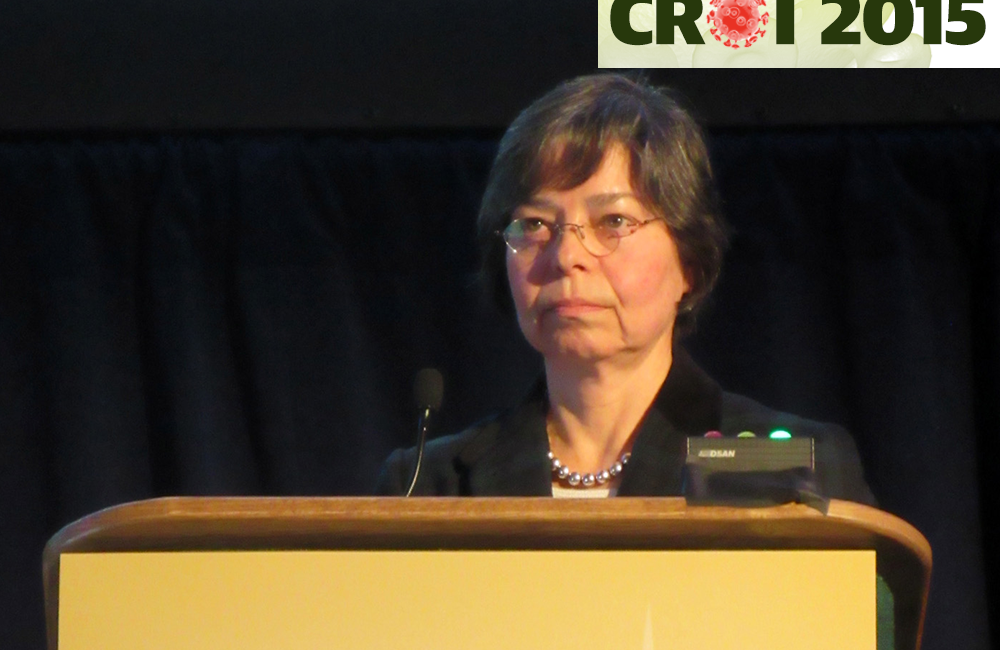 Monina Klevens presenting at CROI 2015. Photo by Liz Highleyman, hivandhepatitis.com
This article is more than 8 years old. Click here for more recent articles on this topic

The burden of hepatitis C virus (HCV) infection is high in the US, with a substantial number of individuals born between 1945 and 1965 having advanced liver fibrosis or cirrhosis and therefore being at high priority for treatment, according to a report presented at the Conference on Retroviruses and Opportunistic Infections (CROI 2015) last week in Seattle, USA.

Over years or decades, chronic HCV infection can lead to serious liver disease including cirrhosis (scarring), hepatocellular carcinoma (HCC; a type of primary liver cancer) and end-stage liver failure, with some patients requiring a liver transplant or dying from liver-related causes.

The advent of highly effective and well-tolerated interferon-free direct-acting antiviral therapy has brought about a revolution in hepatitis C treatment in recent years. The high cost of the new drugs has led to restrictions on their use, however, with some insurers and public payers only covering treatment for the sickest patients. While a growing number of providers and advocates argue that everyone living with hepatitis C should be eligible for treatment, guidelines say that people with advanced liver disease should be prioritised when resources are limited.

Monina Klevens from the US Centers for Disease Control and Prevention (CDC) presented findings from an analysis of the frequency and distribution of liver disease among people with hepatitis C in the US, focusing on the 1945-1965 birth cohort. This group accounts for around 80% of hepatitis C cases in the US, and the CDC recommends that all 'baby boomers' should be tested at least once for HCV regardless of risk factors.

The researchers collected data from Quest Diagnostics, a medical testing company that conducts routine HCV tests in all US states. The company maintains a national test results database and has collaborated with the CDC to improve hepatitis diagnosis and treatment.

Klevens' team collected anonymous data for all positive HCV RNA tests during 2010-2013. A positive HCV RNA test indicates active infection; an HCV antibody test, in contrast, shows that someone was infected in the past, though they may have since cleared the virus spontaneously or with treatment.

The researchers used available values for alanine aminotransferase (ALT), aspartate aminotransferase (AST) and platelet count – three biomarkers of liver function – along with patient age, to calculate a FIB-4 score. FIB-4 is a non-invasive scoring system used to estimate liver fibrosis. It is calculated as (age in years x AST) divided by (platelet count x ALT). Though not as accurate as liver biopsies or FibroScan transient elastometry imaging, FIB-4 scores correlate with biopsy results and may be used to estimate the extent of liver damage when further information is not available. This study used FIB-4 cut-offs of <1 for absent fibrosis (corresponding to Metavir stage F0), 1-<2 for mild-to-moderate fibrosis (F1-F2), 2-3.7 for severe or advanced fibrosis (F3) and >3.8 for cirrhosis (F4).

In 2013, nearly half (47.3%) of people born during 1945-1965 had severe fibrosis or cirrhosis. This proportion was higher than it was for younger people born after 1965 (10.7%), but lower than for older people born before 1945 (73.8%) – not surprising, as liver disease progresses with age. Looked at another way, approximately 81% of all people with advanced fibrosis or cirrhosis were in the 1945-1965 birth cohort, consistent with estimates of the proportion of HCV infections falling within this group.

There was almost no variation in FIB-4 scores over the four-year period, indicating that expanded screening, which the CDC has recommended since 2012, so far has not led to people being testing at less-advanced stages of disease.

"Persons with this stage of severe HCV-related liver disease are a high priority for treatment," they recommended. "Improved birth cohort screening for HCV and linkage to recommended care and treatment are urgently needed to prevent complications."

During the discussion after her presentation, Klevens acknowledged that future analysis could include other factors that contribute to liver disease progression, including heavy alcohol consumption, diabetes and HIV or hepatitis B co-infection – information that would be available through diagnostic codes in medical records. She also suggested that lab markers might be used to determine the number of people who have been treated for hepatitis C – perhaps using a positive HCV RNA test followed by a negative one as a proxy – and how this affects liver disease progression.