PrEP use is rising fast in US, but large racial disparities remain 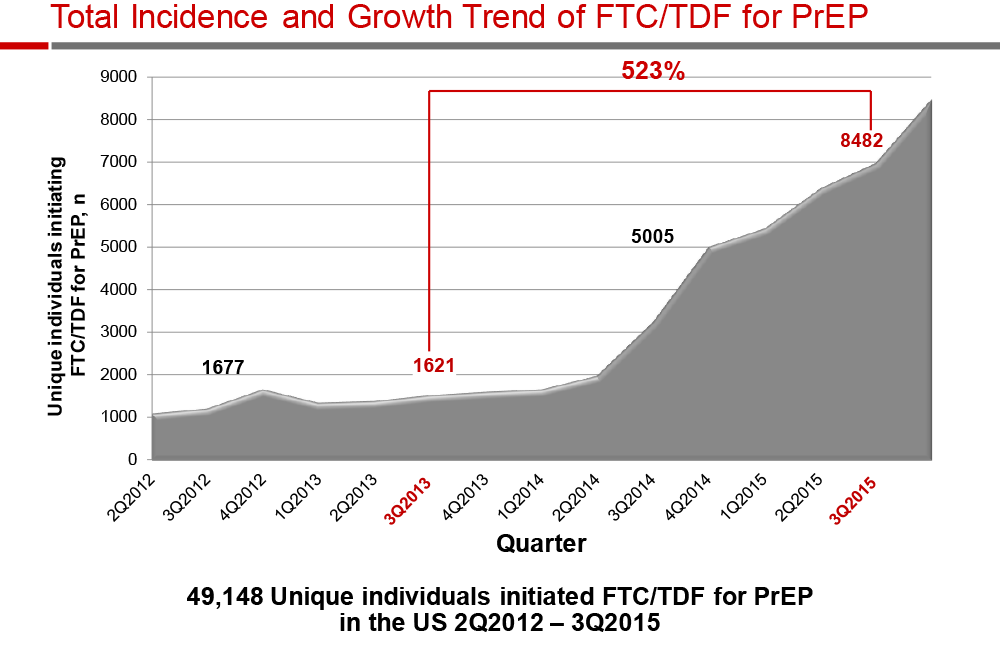 More than 49,000 people in the US have filled prescriptions for Truvada for pre-exposure prophylaxis (PrEP) at retail pharmacies, according to the results of a survey by Gilead Sciences presented this week at the ASM Microbe conference in Boston. Among PrEP users with available data, most were white gay men; black people used PrEP much less often, despite having the highest rates of HIV infection.

The US Food and Drug Administration approved Truvada (tenofovir/emtricitabine) for HIV prevention in July 2012. Adoption was initially slow, but by late 2013 it began to rise steeply in cities such as San Francisco, Seattle, New York City and Chicago as gay and bisexual men began promoting PrEP within their communities. It is difficult to estimate the total number of people who have used PrEP because this information is not centrally collected.

At a conference in 2013 Gilead researchers presented findings from a survey of 55% of US pharmacies showing that fewer than 1300 Truvada prescriptions were written in 2012 for people who did not already have HIV or hepatitis B. About half of these PrEP recipients were women.

An update presented the following year showed that just under 2000 Truvada PrEP prescriptions were written in 2013 and the first quarter of 2014, bringing the total to approximately 3250 since January 2012. In contrast to the earlier report, the proportion of women dwindled from around half to under a quarter, leading the researchers to conclude that the population of PrEP users "appears to be shifting demographically." But this analysis did not include a breakdown by race or ethnicity.

At a meeting in October 2015 Robert Grant (principal investigator of the iPrEx study) said that the latest iteration of the survey found that around 8500 people had been prescribed Truvada for PrEP – more than double the previously reported number, even though the proportion of responding pharmacies had fallen from 55% to 39%.

At the recent ASM Microbe meeting Staci Bush and colleagues from Gilead provided an update from the US pharmacy PrEP survey.

For this analysis, electronic de-identified patient-level data were collected from 82% of US retail pharmacies that dispensed Truvada between 1 January 2012 and 30 September 2015. "Data was projected to account for all retail pharmacies, and to a small extent non-retail pharmacies," the researchers explained.

Again, the analysis excluded people using Truvada for HIV treatment (as indicated by a recorded HIV diagnosis, opportunistic illnesses or use of other antiretrovirals), post-exposure prophylaxis (PEP) or off-label treatment of hepatitis B (the approved hepatitis B regimen is tenofovir alone, not tenofovir/emtricitabine).

Data on race/ethnicity were available for 44% of PrEP recipients (n = 21,463). White people made up 74% of all those who filled Truvada PrEP prescriptions, with Hispanics (12%), African-Americans (10%) and Asians (4%) accounting for much smaller proportions. Further, the proportion of black people who started PrEP actually dropped, from 12% in 2012 to 10% in 2015.

While women made up 21% of those who started PrEP overall, the percentage of prescriptions among women continued to decline, from 49% in 2012 to just 11% in Q3 2015. Approximately 2500 women started PrEP each year, but as the total number of users rose, their percentage of the total fell. Black women were more than four times less likely than white women to have started PrEP.

Looking at age, about 8% of people who started PrEP were younger than 25 years old. The age breakdown was similar across all racial/ethnic groups.

This breakdown of PrEP users does not reflect the distribution of the HIV epidemic in the US. According to the Centers for Disease Control and Prevention (CDC), 44% of new HIV diagnoses occur among African-Americans – who make up about 12% of the US population – with 26% of these being black women. People under age 25 account for 20% of new diagnoses overall, with 80% of them being young gay/bi men and more than half of those being black.

"HIV prevention education and PrEP services may need to be racially focused and culturally relevant to increase PrEP uptake and decrease new infections in populations at the greatest risk," the researchers recommended.

The number of people starting Truvada for PrEP in the Gilead pharmacy survey is certainly an underestimate of the total number of PrEP users in the US.

The survey did not include an estimated 8000 people who received PrEP through demonstration studies and clinical trials (some of whom may have gone on to get regular prescriptions after their studies ended), through the US Medicaid system for low-income people or via Gilead's patient assistance programmes.

While many public and private sexual health clinics send their clients to retail pharmacies to get their Truvada, some large PrEP programmes are not included. For example, Kaiser Permanente in San Francisco – which provides PrEP to 1800 of the more than 6000 people thought to be taking PrEP citywide – does not report pharmacy data to Gilead.

Conversely, estimated numbers may be reduced by the fact that many people who start PrEP do not stay on it indefinitely.

PrEP willingness greater than use

A related study described in the June 9 online edition of Clinical Infectious Diseases found that more than half of gay/bi men in US cities are willing to use PrEP – much higher than the proportion who have actually done so.

A recent CDC analysis estimated that a quarter of gay and bi men in the US and one-fifth of people who inject drugs, but less than 1% of heterosexual men and women, could benefit from taking PrEP.

Brooke Hoots of CDC and colleagues conducted an analysis of the willingness to use, utilisation during the past 12 months and recommended indications for PrEP. The study included 6483 HIV-negative, sexually active men who have sex with men (MSM) surveyed as part of the 2014 cycle of the National HIV Behavioral Surveillance (NHBS) system.

While only about 4% of respondents reported using PrEP, about 60% said they were willing to do so. There was no difference in willingness to use PrEP between black and white gay men, but actual use was about twice as high among white compared to black men.

Men with more education, higher incomes and health insurance were also more likely to use PrEP. This suggests that the disparity "may be attributable to racial differences in health care access rather than a lack of interest," the researchers wrote.

In addition, men who reported bacterial sexually transmitted infections and those who reported more casual sex partners were more likely to use PrEP. Previous studies have found that gay men at higher risk for HIV infection are more likely to want PrEP and to use it consistently. Men in San Francisco and Washington, DC, reported greater use of PrEP than respondents in other NHBS cities, perhaps due to recent PrEP Demo Projects in those cities.

Further, the researchers found that while more than half of respondents had CDC indications for PrEP, young black gay/bi men were less likely to have such indications than young men of other racial/ethnic groups. This is consistent with previous studies showing that although their rates of HIV incidence are higher, black gay men report less risky sexual behaviour and drug use than white men.

"Young, black MSM, despite being at high risk of HIV acquisition, may not have indications for PrEP under the current guidelines", the study authors suggested. "Clinicians may need to consider other factors besides risk behaviours such as HIV incidence and prevalence in sub-groups of their communities when considering prescribing PrEP".

"This will increase the likelihood that PrEP is offered to those at highest risk of HIV acquisition and that the greatest impact on HIV incidence is achieved", they concluded.