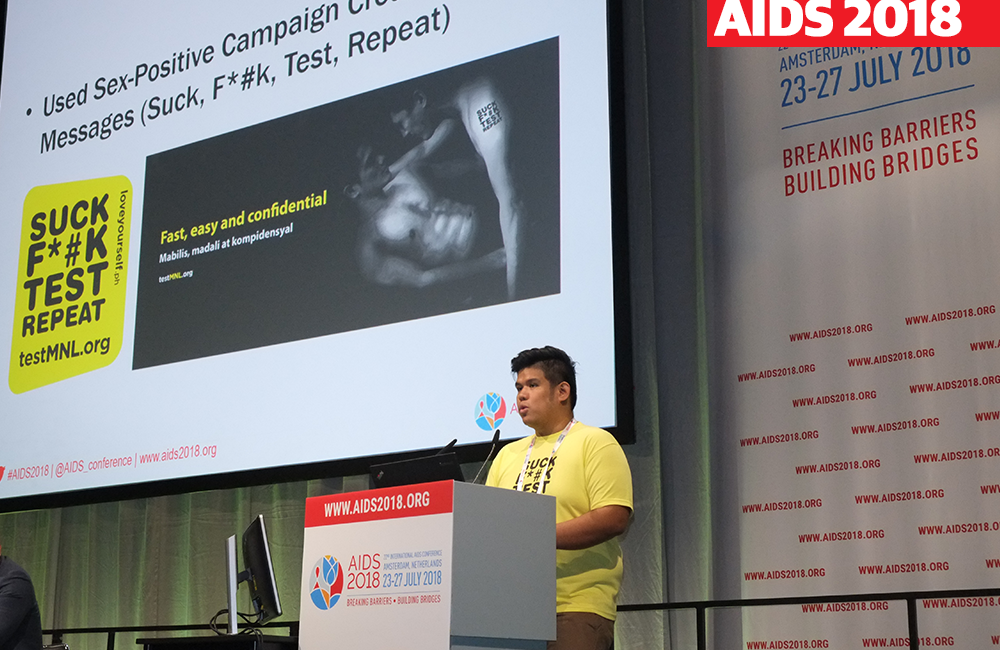 Lord-Art Lomarda said that in the predominantly Catholic country the Philippines, campaigns typically use stigma and fear to educate the public about HIV. His organisation, LoveYourself, wanted to create a sex positive campaign that used the internet and social media to engage young MSM. They adapted a Thai campaign, maintaining its simple and direct language: “SUCK. F*#K. TEST. REPEAT.”

The campaign translated online engagement into ‘offline’ testing at eight MSM-friendly clinics. The clinics reported that they tested over 7000 young MSM, 62% more than in the same month of the previous year.

Tham Thi Tran of PATH said that there are estimated to be around 330,000 men who have sex with men in Vietnam, but previous face-to-face outreach work was reaching less than a tenth of them. PATH’s research suggested that 89% of MSM owned a smartphone, 98% had at least one social media account and 74% met sexual partners online.

Believing that it would make more sense to meet men where they already are, PATH and a group of MSM community organisations partnered with Xóm Cầu Vồng (Rainbow Village), a Facebook group with over 230,000 members. Key MSM influencers were trained to interact with Xóm Cầu Vồng followers, again with the aim of translating social media outreach into use of physical services. A website and mobile app allowed people to book appointments for HIV testing, sexually transmitted infection care, pre-exposure prophylaxis (PrEP) and other services.

In a two-year period, 3626 were counselled about HIV testing, of which 2808 (77%) took a test. The positivity rate of 11.8% is around twice that of MSM testing through other channels.

The Silom Pulse Clinic in Bangkok reported that three-quarters of its PrEP users are ‘PrEP tourists’ who travel from other countries in the region (especially Hong Kong and Singapore) to get PrEP. This is a private-sector, fee-charging clinic which promotes its PrEP services through a number of Facebook groups centered on MSM and PrEP, dating websites, a sex workers’ webboard and other social media. Appointments can be booked online. After an appointment, support is available again online, through the clinic’s Facebook page and online chats with doctors and nurses.

“This form of access requires special online-to-offline measures and a counselling procedure that is tailored to the needs of foreign clients,” reported Natthakhet Yaemim. A key challenge is to ensure ongoing follow-up and monitoring of patients in the months after they get hold of the medication.

Jureeporn Jantarapakde reported on a model of online supervised HIV self-testing provided by the Thai Red Cross. This involved a peer worker having a video link with a person using a self-testing kit, with the worker able to provide support on how to use the test, interpreting the result and the implications of the result. A group of 472 MSM and 99 transgender women had the option to choose between conventional ‘offline’ testing, supervised online self-testing and a mixed approach (online counselling and offline testing). Slightly fewer chose the mixed approach than the other two.

The fully online approach was the most popular, enrolling significant numbers of people who had not tested before (47%) with a very high HIV prevalence (16%). However, linkage to care was poorer in the online group (53%) than in the offline group (84%).

Her colleague Chattiya Nitpolprasert reported on a study which randomised Thai MSM engaged through the Adam’s Love website to either receive a series of online educational interventions or to form a control group. The interventions used a platform called Vialogues in which users watch YouTube videos and are invited to discuss the content with a health educator and other users in a private chat room.

Retention was high – 33 of 37 men in the intervention arm completed all 12 monthly sessions. There were statistically significant differences in condom use, numbers of sexual partners and seeking partners online between the intervention and control arms.

Sereyvisith Sokhan of FHI 360 in Cambodia had concerns about the ability of outreach in physical locations to reach large numbers of people, but argued that internet interventions still have limitations in terms of being unable to reach people who have low literacy, are less engaged with social media or have limited internet access. He described a project using a telephone-based interactive voice response system, which can be accessed from any mobile phone.

Leaflets and social media promoted a hotline which offered three services: MStyle (for men who have sex with men), SreySros (for transgender women) and SMARTgirl (for female entertainment workers). Users could then listen to health information communicated through quizzes and short messages; listen to edutainment using mini-dramas, songs, and testimonials; or speak to a counsellor.

The edutainment was the most popular option, chosen on over half of calls. In an eight-month period, over 67000 calls were received from 8500 unique numbers.

Watch the webcasts of some of these presentations on YouTube.

Young people in South Africa changed their attitudes significantly and adopted safer sexual behaviour, after watching a TV show called Down South – which the UN initiative behind it describes as a tribute to the power of “edutainment”.
UN News
21 Oct 21
Young people

Clubhouse Men Idol Contest is searching for new young generation who has a positive attitude towards sexual health and HIV; who advocate for people to know their HIV status and promote HIV prevention by using condoms and PrEP. Clubhouse is a new social network where people come together to talk, listen and learn from each other in real-time and through voice only. In Thailand, this has become very popular, particularly with the younger generation during Covid-19 time.
APCOM
12 Aug 21
Ethnic & cultural minorities

A new video campaign in Mandarin from ACON hopes to reach out to gay and bisexual men who have come to Australia from Asia to raise awareness about HIV prevention drug PrEP.
Star Observer
15 Jun 21
More editors' picks