Criminalisation of HIV high on agenda at AIDS 2018 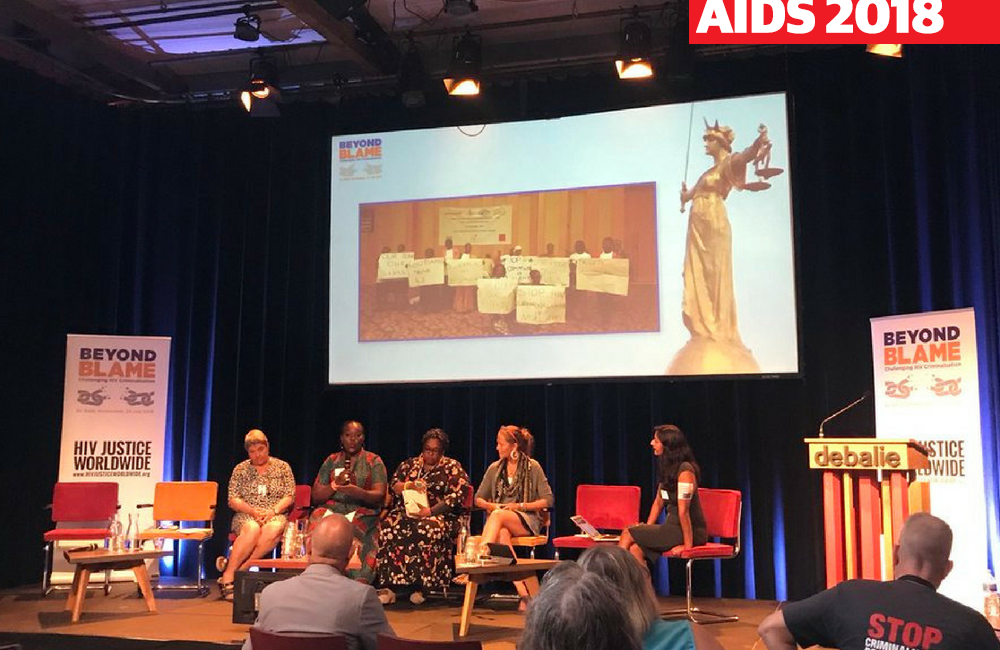 Speakers at the Beyond Blame symposium. Image credit: @KatSmithson

Strategies to oppose the unscientific criminalisation of HIV transmission received a high profile at events in advance of the 22nd International AIDS Conference (AIDS 2018) in Amsterdam this week.

These included the launch by the Global Commission on HIV and the Law of a Supplement to its 2012 Report, Risks, Rights & Health, and the HIV Justice Worldwide symposium, Beyond Blame: Challenging HIV Criminalisation.

Global Commission on HIV and the Law

The first edition of Risks, Rights & Health in 2012 highlighted both the positive and negative impact law may have on ensuring an effective HIV response and called on governments to outlaw discrimination, repeal punitive laws, and enact protective legislation to promote public health and human rights.

Among its original recommendations were a number related to the criminalisation of HIV transmission, exposure, and non-disclosure. They included a proscription on enacting HIV-specific criminal statutes, not prosecuting other than in cases of intentional and malicious transmission, repealing or amending any laws that criminalise vertical (mother-to-child) transmission, and the review of convictions under laws that do not satisfy these requirements.

Medication where the active ingredient is released quite quickly, usually in less than 30 minutes.

The 2018 Supplement emphasises that these, along with its other recommendations, remain relevant, but takes into account developments in science, technology, law, geopolitics and funding since 2012 that have affected people living with or at risk of HIV and co-infections, including hepatitis and tuberculosis (TB).

While celebrating the fact that a number of jurisdictions in Europe, Asia, North and South America, and Africa, have repealed their criminalisation laws, the Supplement explains that as of July 2018, 68 countries still criminalise HIV non-disclosure, exposure, or transmission, and that at the end of 2017, prosecutions had been reported in 69 countries – with the United States, Canada, Belarus and Russia having the largest number.

Among the speakers at the launch, Justice Edwin Cameron of the Constitutional Court of South Africa criticised the failure of courts, including the Supreme Court of Canada, to acknowledge the fact that advances in treatment mean that those with an effectively suppressed viral load cannot transmit HIV to their sexual partners, and called not only for an end to “irrational” criminal laws but for the immediate release of all those imprisoned under them.

Charles Chauvel, one of the Commissioners, explained that countries with “vague” or “insidious” criminalisation statutes, including countries in Central Asia and the Middle East and North Africa region, were notable for having seen an increase in HIV infection rates since 2012, and Dr Shereen El Feki, Vice-Chair of the Commission pointed out that we live in times characterised by a rise in right-wing populist politics, the repression of, and reduction of funding for, civil society organisations, and heightened regional conflict leading to a rise in migrant and vulnerable populations.

Such factors combine to make progressive law reform more difficult; but they also make it even more urgent. Building on evidence gathered since the publication of Risks, Rights & Health, the Supplement offers additional recommendations that take into account these and other social, economic, and political changes. As regards criminalisation, these are that:

These recommendations make it clear that it is unacceptable to equate behaviour which carries with it a risk of onward transmission as intending that such transmission should occur, that general criminal laws should not be used, in effect, as proxies for HIV-specific ones, that expectant women and mothers merit special protection, and that those involved in criminal justice and judicial decision making have an obligation to take into account the best scientific evidence.

The second significant event also addressed some of these themes. Organised by HIV Justice Worldwide,Beyond Blame: Challenging HIV Criminalisation, brought together activists, advocates, lawyers, scientists, healthcare professionals, researchers, and policymakers from across the world to identify ways in which punitive laws and their enforcement might best be challenged.

The symposium was notable for the variety of voices that were heard, and the sharing of a wide range of knowledge, skills, and personal experience of criminalisation.

A comprehensive round up of the current state of criminalisation in regions across the world included reports of positive developments in the Democratic Republic of the Congo, in Mexico (where the Supreme Court held in May 2018 that a retrogressive amendment to one of the state’s laws was unconstitutional), and in Malawi, where civil society and women activists ensured that the Parliament voted down coercive provisions that would have adversely affected the country’s HIV response. Conversely, there were reports of zealous prosecution practices in Belarus, new criminal provisions in Nepal, and other examples of countries that had failed to heed the recommendations of the Global Commission’s 2012 Report.

In a session entitled The Lived Experience, Marama Mullen (New Zealand), Chad Clarke (Canada), Ariel Sabillon (Honduras) and Ken Pinkela (US) spoke passionately about their different encounters with criminalisation, whether as witness or defendant, and how they use their experience to fight punitive laws; and in another Edwin Cameron, Richard Elliott (Canadian HIV/AIDS Legal Network), Lynette Mabote (ARASA), and others discussed the benefits and pitfalls of using advances in prevention and treatment in advocacy work. Laurel Sprague (UNAIDS) argued that, in the end, de-criminalisation is a matter of justice and values, and that we must avoid the risk of marginalising or judging those who do not have access to the benefits of scientific developments – something picked up later by a participant from Southern Africa who explained that 'Undetectable equals Untransmittable' (U=U) is an unhelpful advocacy tool in countries where there is limited access to viral load testing.

The final plenary session focused on the distinctive experience of women. Sarai Chisala-Tempelhoff (Malawi) explained that while criminalisation statutes had originally been embraced by many women as a means of protecting themselves, it was soon recognised that it had the opposite effect, while Deon Haywood (US) called out white pro-criminalisation feminists who failed to recognise the impact on women of colour. Kristin Dunn (Canada) ended the session with a powerful account of empowerment work she does with indigenous women in Saskatoon, and how criminal laws are weapons that sustain colonial control over those women’s bodies.

Matthew Weait is Professor of Law and Dean of the Faculty of Humanities and Social Sciences, Portsmouth University, United Kingdom.

View the Beyond Blame symposium programme (PDF) and watch the videos from the symposium on YouTube.

The Global Commission on HIV and the Law to help countries and communities dismantle discriminatory laws that unjustly punish people, trap them in a cycle of illness and poverty, and prevent progress toward ending AIDS.
STAT
11 Aug 22
HIV & criminal law

It has been reported that the ex-partner of rugby star Gareth Thomas has filed a lawsuit claiming that Thomas had knowingly infected him with HIV.
Gay Community News
8 Aug 22
HIV & criminal law

Stigma and discrimination should be a priority and no longer be addressed as a by-product of other activities, such as scaling up treatment and retention in care.
Thomson Reuters Foundation
2 Aug 22
HIV & criminal law

Breaking Agreement to Use a Condom Is a Sex Crime, Canada High Court Rules

The Supreme Court ruling is one of the strictest in a recent spate of measures addressing deceptive condom use, as courts try to define consent.
The New York Times
1 Aug 22
More editors' picks