HIV seroconversion is rare if Truvada PrEP is used consistently 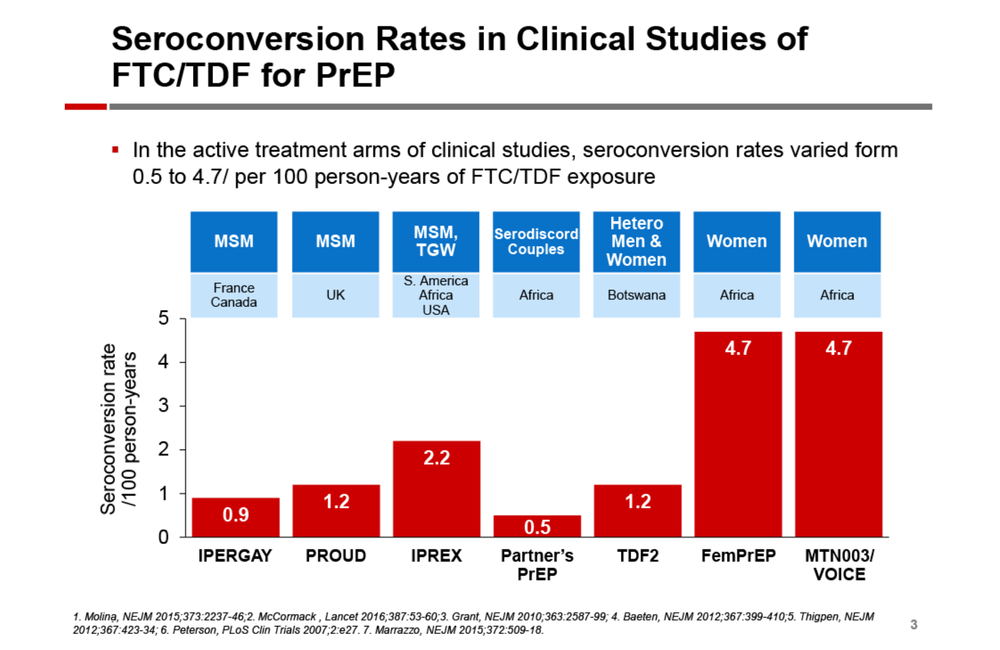 New HIV infections occurred at a low rate of about 1 per 100 person-years among people who took daily Truvada for pre-exposure prophylaxis (PrEP), with seroconversions mostly seen in those who stopped taking their pills, according to an analysis of more than 30 studies and demonstration projects presented last month at the ASM Microbe 2016 conference in Boston.

Research has shown that Truvada (tenofovir/emtricitabine) reduces the risk of HIV infection by more than 90% if used consistently. In an open-label extension of the iPrEx trial, no one who took Truvada at least four times per week became infected.

In studies to date, new HIV infections have mostly occurred among people who did not actually take Truvada regularly. However, in real-world use, a man in Toronto became infected with a multidrug-resistant strain of HIV despite apparently very consistent adherence to PrEP.

In the study presented at ASM Microbe, Scott McCallister and colleagues of Gilead Sciences did an analysis of HIV seroconversion rates in various studies and demonstration projects of PrEP use in diverse populations, comparing them to rates in clinical trials.

This analysis included a total of 8478 participants who received open-label (not blinded) once-daily Truvada PrEP in 32 studies and demonstration projects in 16 countries; people in deferred or observation-only control arms were excluded. Altogether they contributed a total of 7061 cumulative person-years of tenofovir/emtricitabine exposure.

Most of these studies (19) were conducted in North America, followed by Africa (9), Europe (3), Asia (2), Australia (2), and South America (2). A majority (28) included men who have sex with men and 23 also included transgender women, with fewer studies including heterosexual women (12), heterosexual men (5), serodiscordant couples (6) and adolescents (1). All but two were conducted after the US Food and Drug Administration approved tenofovir/emtricitabine for PrEP in July 2012.

Categorised by sex/gender, the studies included 7002 men, 1378 women and 76 transgender people. Of these, 64 gay men, two non-trans heterosexual women and one transgender woman became HIV-positive, resulting in seroconversion rates of 1.03, 0.25 and 2.07 per 100 PY, respectively.

Twenty-five seroconverters were black, 14 were white, one was Asian, 23 were of mixed race and four were not categorised. The largest number of new infections (29) occurred in the US, with 18 in Peru and five or fewer in all the other included countries.

Of the 67 seroconversions, six happened during the post-treatment phase of the projects – when participants were no longer taking Truvada.

Dried blood spots were used to measure levels of tenofovir diphosphate (the active form of the drug) in red blood cells, as an indicator of adherence; these were available for 32 seroconverters. Among them, 17 had tenofovir diphosphate levels below the limit of quantification, while 14 had levels suggesting they took less than two Truvada tablets a week.

"Available intracellular data demonstrates undetectable or very low [tenofovir diphosphate] levels in nearly all of those with seroconversion," they added.