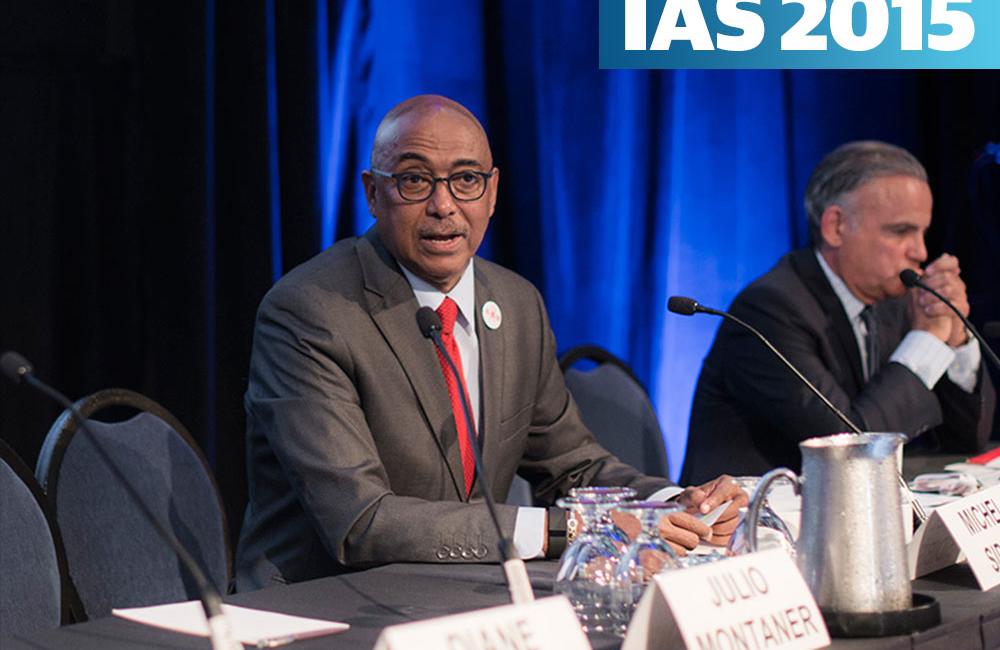 Michel Sidibé, executive director of UNAIDS, speaking at the International HIV Treatment as Prevention Workshop. Image by www.treatmentaspreventionworkshop.org
This article is more than 8 years old. Click here for more recent articles on this topic

Health services in some African countries including Botswana, Rwanda and Malawi are now providing effective HIV treatment to a greater proportion of their HIV-positive citizens than the United States and other rich countries. Meanwhile, some of the first data to come from large African studies examining the population impact of treatment as prevention approaches suggest that the objectives of testing and treating 90% of those eligible can be achieved.

These encouraging findings were presented to the International HIV Treatment as Prevention Workshop in Vancouver yesterday, in advance of the larger HIV conference (IAS 2015) that is being held in the city this week. Michel Sidibé, executive director of the Joint United Nations Programme on HIV/AIDS (UNAIDS) told the workshop that his organisation’s ambitious targets of having 90% of people tested, 90% of people with HIV treated and 90% of those on treatment with a suppressed viral load were achievable – so long as there is political commitment and leadership.

Large studies of ‘test and treat’

As outlined by aidsmap.com last year, several massive randomised studies are examining the population impact of scaling up ‘test and treat’ approaches in African countries. The studies will find out whether it is feasible to provide HIV testing to almost everyone in the local area and then – for those diagnosed with HIV – to link almost all of them to medical care and to provide almost all with HIV treatment that lowers their viral load to undetectable levels.

The ultimate aim is to substantially lower new HIV infections (incidence). Those results are not ready, but Diane Havlir of the University of California said that the SEARCH study is meeting the 90-90-90 targets.

In Uganda and Kenya, SEARCH is a study randomising 32 communities to either an intervention of expanded testing and treatment, or usual services. A total of 334,540 people are enrolled. After consultation with community stakeholders, the researchers decided against a narrowly HIV-focused testing drive. Instead, community health campaigns are run in intervention communities, offering testing for high blood pressure, diabetes and malaria as well as HIV. These may be accompanied with talks and activities on a range of health and agricultural topics. This lessens the stigma of taking an HIV test and meets other health and social needs. Home visits and additional testing services for key populations attempt to reach those who don’t take part in the community health campaigns.

Streamlined services have been designed to make healthcare more welcoming and less time consuming for those diagnosed with HIV. Services sometimes struggle to engage with people who have high CD4 cell counts and who do not feel unwell. Streamlined services aim to improve engagement and retention of this group. Clinic and pharmacy visits are less frequent, waiting times have been reduced, staff are better trained, adherence and attendance problems are handled in a more empathetic way, many problems can be dealt with over the phone, and appointment reminders are sent by text message. Antiretroviral therapy is usually begun at the first visit and there is a structured counselling format for discussion of viral load results, both detectable and undetectable.

Diane Havlir told the meeting that so far, 90% of adult stable residents have accepted the offer of testing, 93% of those diagnosed have been retained in care for at least six months, and 92% of those in care have a viral load below 400 copies/ml.

PopART is one of the other large population studies, randomising 21 communities with a total population of 1.2 million people, to three different arms. Richard Hayes of the London School of Hygiene and Tropical Medicine said that interventions include annual home-based HIV testing, a range of health promotion activities and an offer of immediate antiretroviral therapy.

Based only on the first annual round of implementation, the intervention appears to be close to reaching the first 90% target, with an estimated 87% of women and 79% of men living with HIV aware of their HIV status. (Without the intervention, figures would be 56% and 53%).

Acceptance of the offer of HIV treatment to those aware of their status has been slower, with 65% of women and 62% of men receiving antiretroviral therapy. Nonetheless the proportion who have begun treatment rises steadily with each successive month after diagnosis; the figures are expected to improve. Moreover identifying ways to encourage quicker linkage to care is a priority for future rounds of the study.

Another challenge is improving men’s engagement with the programme. A quarter could not be reached or refused to participate.

The meeting heard that two African nations, Botswana and Rwanda, appear to have better treatment cascades than the United States. These are not the results of research studies as described above, but reflect everyday services after several years of political commitment, investment in health and strong governance. Moreover, both are small countries (with populations of two and ten million respectively) which have taken advantage of unique economic and historical circumstances to reform their health services.

Both are close to reaching the UNAIDS 90-90-90 targets. However because the United States health system has considerable difficulties with linkage to and retention in care for poorer people, it lags behind.

Similarly, David Maman outlined the care cascade in Chiradzulu, Malawi where Médecins Sans Frontières first established an antiretroviral programme in 2001. Based on a household survey, 77% of those living with HIV are diagnosed, 84% of them receive antiretroviral therapy and 91% of those on therapy have an undetectable viral load.

Despite a local HIV prevalence of 17%, the widespread use of antitretroviral therapy has brought incidence down to 0.34% per year. Maman hadn’t anticipated such a profound impact on new infections. “We never saw a model that showed that this was feasible,” he told the meeting.

But impressive overall figures can mask inequalities. Sabin Nsanzimana of the Rwanda Biomedical Center said that prevalence remains substantially higher in female sex workers, men who have sex with men and other key populations. If services are not appropriate and adapted to these groups, they and their sexual partners will not get the benefits of HIV treatment.

In many settings, men are less likely to test, and the inequality this introduces persists along the treatment cascade. Frank Tanser of the University of KwaZulu Natal noted that men’s poorer access to healthcare has direct implications for onward HIV transmission – and therefore women’s health.

Overall, he said that the good news is that programmes have learnt how to provide antiretroviral therapy to willing volunteers and to able people who can get to clinics. The bad news was that they have not learnt how to reach people who are not motivated by their sickness, people who have barriers to accessing care and people who don’t know their HIV status.

And David Ripin of the Clinton Health Access Initiative said that as well as celebrating those countries doing well, attention needs to be given to high-prevalence countries which are struggling. There are 20 countries which account for 85% of all people who should receive antiretroviral therapy but do not, he said. Countries such as Nigeria, Mozambique, Cameroon, the Democratic Republic of Congo and Indonesia needed help to scale-up provision from a low base, he said.

The Tennessee Department of Health says it will no longer accept federal grant money to prevent or treat HIV. Experts worry the state has set itself up for a major outbreak.
NBC News
23 Jan 23
HIV prevention policy

Tennessee to cut off funding to nonprofits for HIV prevention, testing, treatment

The state of Tennessee is cutting funding to HIV prevention, detection and treatment programs that are not affiliated with metro health departments as of May 31.
Commercial Appeal
19 Jan 23
More editors' picks