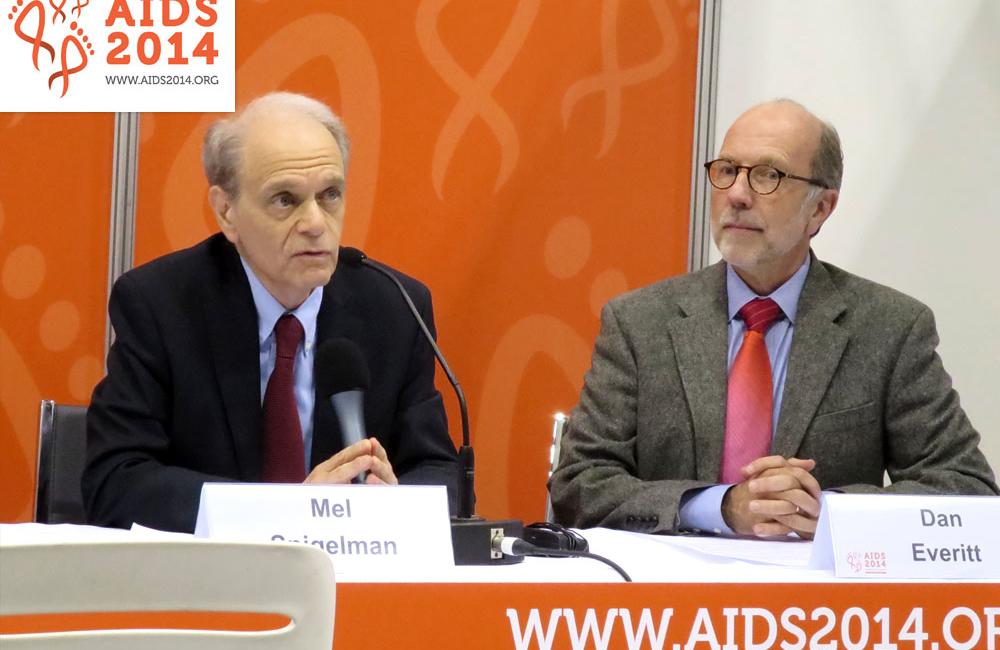 Mel Spigelman and Dan Everitt presenting at AIDS 2014. Photo by Liz Highleyman, hivandhepatitis.com
This article is more than 8 years old. Click here for more recent articles on this topic

A novel TB drug regimen that could treat drug-sensitive and some forms of drug-resistant TB far more quickly than current standard TB therapy, according to findings from a phase IIb trial were presented today at the 20th International AIDS Conference (AIDS 2104) in Melbourne, Australia.

Phase IIb trials evaluate the efficacy and safety of a novel therapy and determine which dosage is most efficacious. This study was conducted over eight sites in Tanzania and South Africa.

A total of 181 smear-positive people with drug-sensitive TB were randomised to receive a daily regimen of 400mg moxifloxacin, 100 mg Pa-824 and 1500mg pyrazinamide (M-PA100-Z), or the same regimen with 200mg Pa-824 (M-PA200-Z) or standard treatment of weight-adjusted isoniazid (H), rifampicin (R), pyrazinamide (Z), and ethambutol (E) (HRZE) for eight weeks of treatment. People with MDR-TB received M-PA200-Z. In the study, 19.5% of the participants (n = 35) had HIV co-infection. Participants living with HIV continued on the same ART regimen they were receiving or, if newly infected, started ART within a few weeks after starting TB treatment.

The primary endpoint was the rate of change in colony forming units (CFU) from sputum on solid culture over eight weeks. This gives an early indication of the speed at which an experimental TB treatment regimen is preventing TB bacteria from replicating.

All three experimental treatment arms had greater average reductions in CFU counts than HRZE over eight weeks, which was statistically significant for the M-PA200-Z arm (p< 0.05).

“Hopefully more people will comply with a shorter regimen of two months, so less drug-resistance will develop in the future. The cost of TB treatment could also be reduced by 90% in some parts of world if PaMZ is used”, said Dr Daniel Everitt of the TB Alliance, who was presenting the study.

In the MDR-TB arm, the log daily CFU decrease using M-PA200-Z was 0.117 (95% CI: 0.070-0.174). Although only nine people with MDR-TB could be included in the statistical analysis due to late exclusions for pyrazinamide resistance, the results are promising for PaMZ to be a 6-month treatment for MDR-TB compared to the current 2-year treatment regimen. This will result in a reduction in pill burden, economic cost and less time out of work for people with MDR-TB.

M-PA200-Z was also significantly more efficacious than HRZE in three of the five secondary outcome measures. There were no differences from the above when adjusted for site, HIV status or baseline CFU as baseline co-variates.

On the basis of these data, TB Alliance will advance PaMZ to a global phase III clinical trial named STAND (Shortening Treatment by Advancing Novel Regimens) by the end of 2014, provided adequate funding is secured.

A video of a press conference on TB, held on 21 July, is available on the conference YouTube channel.

The CDC published a recommendation for a 4-month regimen to treat patients aged 12 years or older with drug-susceptible pulmonary tuberculosis. The regimen containing rifapentine, moxifloxacin, isoniazid and pyrazinamide was shown in a recent clinical trial to be noninferior to the standard 6-month regimen in curing drug-susceptible TB.
Healio
7 Mar 22
More editors' picks