Meta-analysis: only half the people who start PEP complete the course 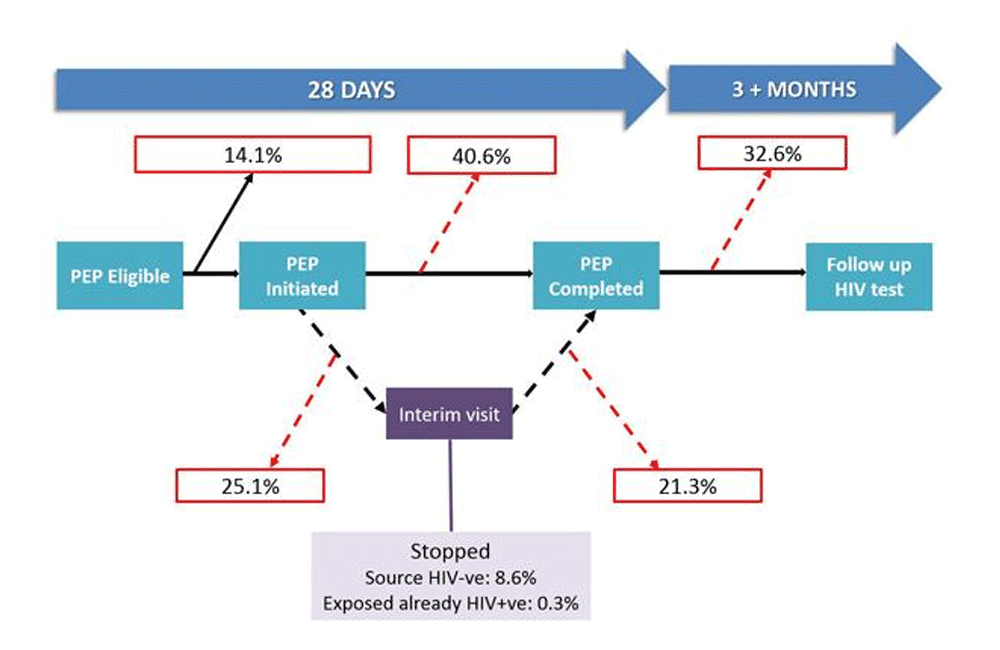 Losses along the PEP cascade. Diagram taken from poster by Nathan Ford (TUPE153).

There are significant losses at each step of the post-exposure prophylaxis (PEP) ‘treatment cascade’, according to a systematic review and meta-analysis of 97 studies presented to the 20th International AIDS Conference (AIDS 2014) in Melbourne yesterday. The problems with uptake, adherence and completion point to a need for a simplified approach, comment the authors.

PEP is a 28-day course of two or more antiretroviral drugs, taken by HIV-negative individuals who believe they may have been exposed to HIV, for example after a needlestick injury in a healthcare facility, when a condom has split, or following sexual assault.

Nathan Ford and colleagues from the World Health Organization identified all studies of PEP that reported on completion rates and pooled their data. Information about 21,462 individuals in 97 separate studies was included.

Of individuals who were assessed by a healthcare provider and judged to be eligible for PEP, 14% chose not to take it. Of all individuals starting PEP (and not subsequently judged to be ineligible), only 56.6% completed the 28-day course.

Completion was poor for all populations and for all types of exposure. However, it was especially low among female sex workers (48.8%) and victims of sexual assault (40.2%).

Of those who completed the course, 31.1% failed to attend for a follow-up visit that would include HIV testing.

Whereas some programmes give individuals the drugs for the full 28 days of treatment, others initially offer a partial prescription (sometimes called a ‘starter pack’) and require individuals to return to the healthcare facility for more. Starter packs were most commonly provided for cases of non-occupational exposure or sexual assault. However, fewer people given starter packs completed the course (53.2%) than people given the full course (70.0%). Over a quarter of those given a starter pack failed to return for the rest of the prescription.

Interventions to improve uptake and retention, and a simplified approach, are needed, say the authors. They also say that the problems with PEP give insight into the challenges for adherence to pre-exposure prophylaxis (PrEP), which also involves HIV-negative people taking antiretroviral drugs.

Pharmacists in California will be able to dispense HIV prevention drugs without a prescription beginning next year under a bill signed into law Monday by Gov. Gavin Newsom, making the state the first in the nation to allow such an arrangement.
Advocate
8 Oct 19
PEP

A retrospective review of HIV-1 post-exposure prophylaxis (PEP) finds it is often prescribed in response to patients' emotional stress rather than according to treatment guidelines.
MD Magazine
9 Nov 18
More editors' picks