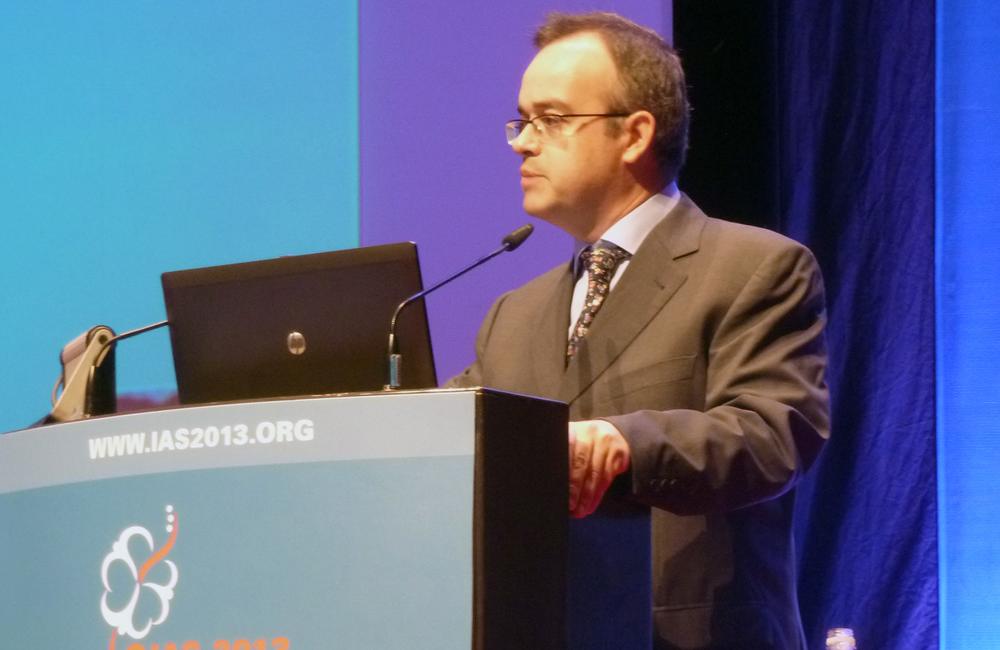 The non-invasive transient elastometry method of estimating liver damage may be a better way to predict which people co-infected with HIV and hepatitis C will progress to decompensated liver cirrhosis and death, researchers reported last week at the 7th International AIDS Society Conference on HIV Pathogenesis, Treatment and Prevention in Kuala Lumpur.

A variety of methods are used to determine the extent of liver damage, which is an important factor in deciding who should be treated for hepatitis C. Liver biopsy is considered the 'gold standard', but is expensive, variable across testers, inconvenient and sometimes painful, making it poorly suited for repeat testing to monitor changes over time.

Infections caused by a micro-organism related to TB which can cause disease in people with advanced HIV.

Several non-invasive biomarker indices are used, but they are not as accurate as biopsy. The transient elastometry – or Fibroscan – technique uses sound waves to measure liver stiffness, with higher scores (expressed in kiloPascals or kPa) indicating more extensive fibrosis. Fibroscan has been widely adopted in Europe but remains controversial in the US.

Juan Macías of Hospital Universitario de Valme in Seville, Spain, and colleagues compared the performance of liver biopsy versus liver stiffness measurement as a way to predict survival and liver decompensation – or loss of essential function – among HIV/HCV co-infected individuals, a group that could benefit from more frequent monitoring using a non-invasive method.

This retrospective cohort study included 297 co-infected patients who had liver biopsies and liver stiffness measurements separated by no more than 12 months; the baseline date was considered to be the halfway point between biopsy and LSM. A majority of participants (77%) were men, the median age was 42 years and most had a history of injecting drug use.

More than 90% were on antiretroviral therapy at baseline, most with undetectable HIV viral load, and the median CD4 count was high, at 514 cells/mm3. Most had HCV genotypes 1 or 4 and 60% had undergone interferon-based hepatitis C treatment. At baseline, 14% had no evidence of fibrosis (stage F0), 33% had mild fibrosis (F1), 27% had moderate fibrosis (F2), 13% had advanced fibrosis (F3) and 14% had cirrhosis (F4). The median liver stiffness measurement was 7.6 kPa.

Participants were followed from 2005 to 2011, with a median follow-up period of five years. The researchers looked at rates of first decompensation events and all-cause mortality. Macías explained that they looked at all-cause rather than liver-related mortality because some deaths that appear non-liver-related may actually be related – hepatic encephalopathy, or brain impairment, could lead to a traffic accident, for example.

There were 21 total deaths during the study period, for an overall mortality rate of 7.1% or 1.6 per 100 person-years. Twelve deaths were liver-related but none were AIDS-related.

After adjusting for potential confounding factors, worse fibrosis according to biopsy (adjusted hazard ratio 1.52 per fibrosis stage) and a higher liver stiffness score (1.28 per 5 KPa) both predicted greater risk of death. Calculating a measure known as integrated discrimination improvement, the researchers determined that transient elastometry performed 3.9% better than liver biopsies at predicting death, which fell just short of statistical significance.

Turning to liver decompensation, there were again 21 total events – including 12 cases of abdominal fluid accumulation (ascites), four cases of gastrointestinal bleeding and two cases of hepatic encephalopathy – for a rate of 7.1% or 1.59 events per 100 person-years.

After adjustment, biopsy and liver stiffness score again both predicted higher risk (adjusted hazard ratios of 1.67 per fibrosis stage and 1.36 per 5 KPa increase). Most decompensation events occurred among people with liver biopsies showing cirrhosis. Here, transient elastometry performed 8.4% better than biopsies, and this was significant.

"The non-invasive nature of [transient elastometry] should favour its use instead of [liver biopsy] when the only issue is predicting the clinical outcome of liver disease in HIV/HCV co-infection," they recommended.

In response to an audience question about when to use transient elastometry versus biopsy, Macías replied that clinicians are already phasing out biopsy in Spain. "It essentially has disappeared as a way of diagnosing patients, and is not used to stage fibrosis anymore," he said.