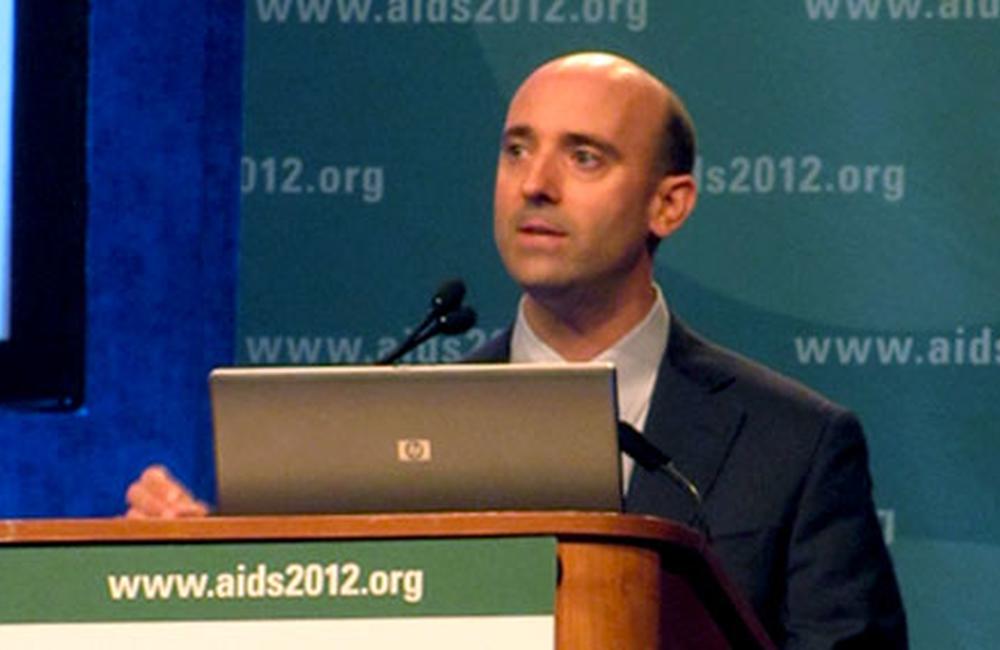 Vincent Lo Re of the University of Pennsylvania. Image ©Liz Highleyman / hivandhepatitis.com
This article is more than 10 years old. Click here for more recent articles on this topic

Despite effective antiretroviral therapy, people co-infected with HIV and hepatitis C remain at higher risk for decompensated liver disease and other liver-related complications than those with hepatitis C alone, according to findings presented on Wednesday at the 19th International AIDS Conference (AIDS 2012) in Washington DC.

Vincent Lo Re from the University of Pennsylvania and colleagues conducted a retrospective cohort study comparing 4280 HIV/HCV ART-treated co-infected patients and 6079 HCV-monoinfected patients matched for age and race/ethnicity in the Veterans Aging Cohort Study Virtual Cohort between 1997 and 2010.

Almost all participants were men and about two-thirds were black. All had detectable HCV viral load and had not previously been treated for hepatitis C. Just over one-quarter were heavy alcohol drinkers. Co-infected people had been on combination ART for at least one year. About 45% had pre-ART CD4 cell counts of 200 cells/mm3 or less.

The researchers analysed occurrence of clinical conditions related to liver decompensation including ascites (fluid accumulation in the abdomen), bacterial peritonitis (inflammation of the abdominal lining) and bleeding varices (swollen veins in the oesophagus). Hepatic encephalopathy and jaundice were not included.

Co-infected people on combination ART had a significantly higher rate of liver decompensation than those with hepatitis C alone (6.3 vs 5.0%, respectively), for an adjusted hazard ratio (HR) of 1.83, or nearly twice the risk. The median age at which decompensation occurred was similar for both groups, however.

At the time of the first decompensation episode, frequencies of both ascites and peritonitis were similar in the co-infected and monoinfected groups, but bleeding varices were about twice as common in the monoinfected group.

The two groups had similar rates of hepatocellular carcinoma (1.2 vs 0.9%, respectively), for an adjusted HR of 1.69. Co-infected people had a small but statistically significant increase in risk for all severe liver events taken together.

Looking at co-infected people with low or undetectable HIV viral load, hazard ratios fell slightly (to 1.71 for <1,000 copies/mL and 1.73 for <400 copies/mL), but rates of liver decompensation still remained higher in co-infected compared with mono-infected patients.

Lo Re explained that when stratifying according to pre-ART CD4 cell count, hazard ratios were lower for people with 350-499 or 200-349 cells/mm3 than for those with less than 200 cells/mm3.

It is incumbent upon providers to assess risk factors, develop ways to detect the subgroups of patients at highest risk for rapid progression, and to prioritise such individuals for hepatitis C treatment and trials of new agents, he added.