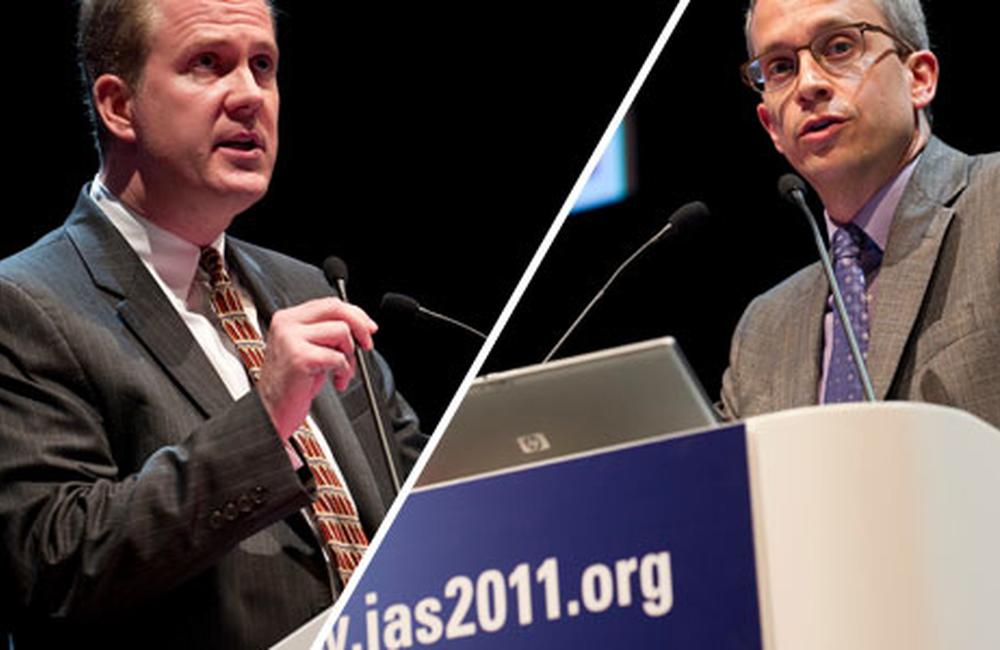 Two studies of the use of oral pre-exposure prophylaxis (PrEP) in heterosexual people show that oral PrEP will protect women against HIV.

The 6th International AIDS Society Conference (IAS 2011) in Rome heard the additional data from two trials of pre-exposure prophylaxis in heterosexuals yesterday. First results from these trials, the Partners PrEP trial and the TDF2 trial, were announced on Wednesday, 13 July. This was when the placebo arm of the Partners trial was closed well in advance of the planned ending date as it was realised that there were many more infections in this arm than in people taking antiretroviral PrEP.

The new data on PrEP in men and women were keenly anticipated because another study of PrEP in women, FEM-PrEP, had closed recently after finding zero efficacy for Truvada, and it had been theorised that oral PrEP might not work for women because drug concentrations in the genital tract were too low.

The results of the TDF2 trial were planned to be announced at the IAS conference, but in the event were released at the same time as the Partners PrEP results, while a special session was convened at the conference to include more data from both studies.

Efficacy in men and women

Unadjusted figures in the TDF2 study at first suggested there might be some difference in efficacy between men and women. It is important to note that this study was not ‘powered’ to demonstrate efficacy; this means that – due to there being fewer infections than expected – even a statistically significant positive result is based on too few cases for it to be regarded as a truly convincing efficacy result. Nonetheless, the headline finding of 63% efficacy against placebo was statistically significant.

However when only participants who had refilled their pills at the clinic in the last 30 days were counted, there were three infections in women on Truvada versus 13 on placebo. This was an efficacy of 75.5%, which was statistically significant (p=0.021). In men in this group there was one infection on Truvada versus six on placebo (82% efficacy), which was actually not statistically significant, due to the small numbers.

Because the Partners study has only recently closed its placebo arm, a limited amount of other findings were announced. Placebo-arm recipients will be offered tenofovir or Truvada. Recipients already taking active drug will remain blinded (will not know whether they are on tenofovir or Truvada) to see if outcomes remain similar.

Presenter Jared Baeten of the University of Washington said that adherence had been excellent throughout, with approximately 97% adherence in all arms, and strong correlation between self-reported adherence and pill count. Baeten speculated that adherence might tend to be higher in couples, especially ones who received adherence and sexual risk counselling together, as they would tend to look after each other. Although 27% of the couples reported unprotected sex in the previous month at baseline, this declined throughout the study to about 10% at month 30.

Initial safety data raised no concerns with similar rates of adverse events and laboratory abnormalities. There were 17 cases of raised creatinine (indicative of kidney malfunction) on tenofovir and 20 on Truvada versus twelve on placebo – not a significant difference.

There was a slightly raised incidence of nausea in the first month in patients on tenofovir or Truvada (6.3 and 5.9%) versus placebo (4.5%) but no difference after the first month.

Adherence in the TDF2 study was somewhat lower; by pill count it was about 84%, which makes the efficacy measures reported even more impressive. There was no difference in reported adherence between seroconverters and others in the Truvada group, though it was slightly higher (93%) in the placebo group.There were no differences observed in sexual behaviour: 14% in all arms reported having had more than one sexual partner in the previous month and 81% reported consistent condom use.

There was a statistically significant difference in nausea between Truvada recipients (19%) and placebo (7%) and also in vomiting (11.5 and 7%) and dizziness (15 versus 10.5%), though presenter Michael Thigpen did not specify whether these were concentrated into the first month. There was no difference in the rate of serious adverse events (approximately 9% in all arms).

Forthcoming analyses will include efficacy among participants with varying levels of self-reported adherence, drug level testing for efficacy and adherence, changes in bone mineral density and trends in risk behaviour over time. All participants will now take open-label Truvada if they want to.

Amongst the most important data presented were those concerning acute infection. In Partners PrEP, twelve participants who had tested HIV-negative at screening were found to have acute HIV infection.

In TDF2, there was one case of a participant who started taking Truvada while having acute HIV infection, and developed multi-drug-resistant HIV. S/he tested positive for the K65R tenofovir resistance mutation and the M184V FTC mutation; s/he also had a broad-spectrum NNRTI mutation A62V, which suggests that the virus contracted was not wild-type. This individual is currently undetectable on AZT, 3TC and boosted lopinavir.

One seroconverter in the placebo arm was also found to have HIV with low levels of the K65R mutation. This is a reminder that one of the most problematic aspects of PrEP is the need to exclude patients who are in the process of seroconverting to HIV from taking it, and also that it does not protect against drug-resistant virus.

View the presentation of the Partners PrEP study, with audio, on the conference website

View the abstract for the TDF2 study on the conference website

View the presentation of the TDF2 study, with audio, on the conference website