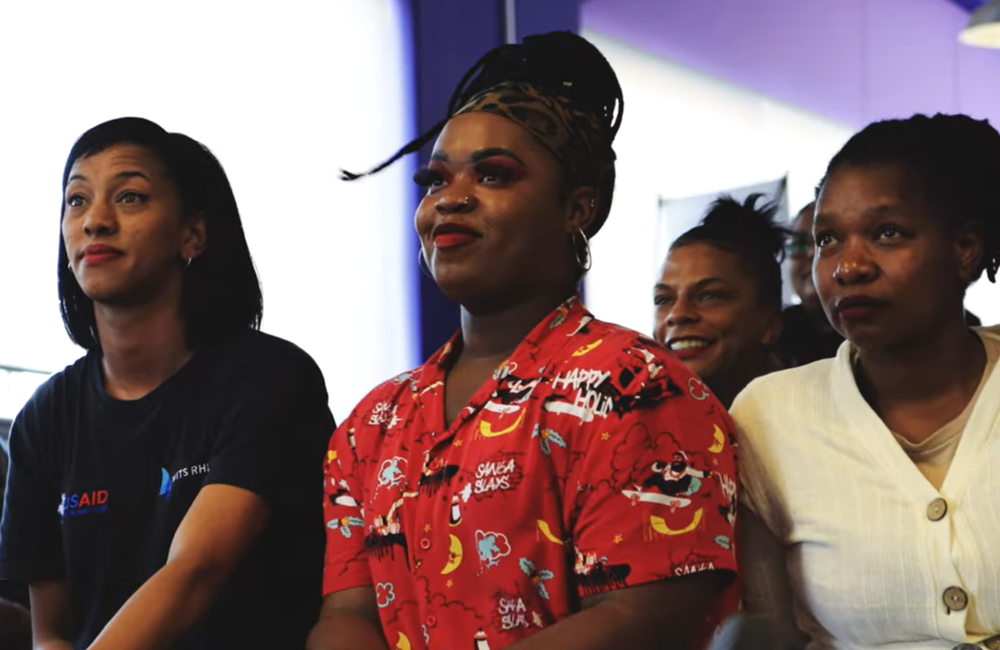 Image taken from a video by Zoey Black about the Wits RHI project on transgender health care in South Africa.

Transgender people were three times more likely to have a suppressed viral load if they were receiving hormone therapy as part of integrated sexual health and gender-affirming services, a large South African study has found. However PrEP outcomes were not better in people who got hormone therapy.

South Africa is home to the world’s largest HIV epidemic – over 7.7 million people making up nearly 20% of the global HIV burden. Trans people are much more likely to have HIV, with a recent global review indicating that trans women are 66 times more likely to have HIV and trans men are seven times more likely. HIV prevalence among South Africans between the ages of 15 to 49 is estimated to be 19%, but it is as high as 63% among trans women in Johannesburg, while the prevalence of HIV among trans men is unknown. At least 0.3% of the South African population is comprised of trans or gender non-conforming individuals.

It has been shown that tailored trans services integrating sexual health and gender-affirming services results in improved outcomes for both HIV prevention and care.

This study is based on a review of gender-affirming healthcare and HIV services provided at four transgender primary healthcare sites in South Africa between 2019 and 2021. It was conducted by Rutendo Bothma and colleagues at the Wits Health and HIV Research Institute and published in the Journal of the International AIDS Society. Bothma also gave aidsmap additional details of the service delivery approach.

Services were provided by a multidisciplinary team of nurses, community healthcare workers, doctors, psychologists and social workers – these staff were largely cisgender. However, trans peer outreach workers, or trans agents, were central to the service delivery model, as they worked to engage trans communities, link individuals to care, and assist with retention in care. They did this in various ways, such as using social networks to locate trans people in communities, using financial incentives to encourage recruitment, door-to-door outreach and meeting people online.

Social workers played a pivotal role in providing psychosocial support after HIV testing. This included motivational counselling to assist with starting either PrEP or antiretroviral treatment, and assessing any adherence barriers or risks. They followed up in instances where social and structural barriers were present, or if the individual found adherence challenging. Varied forms of support were offered including assisting with disclosure of HIV status, adherence support groups, accessing social services (such as legal name changes and getting new identity documents) or government grants, and referral for gender-based and intimate partner violence services.

All staff received training on varied aspects of working with trans people, including differentiating terms such as sex, gender and sexual orientation, and how to work respectfully with trans clients, such as asking preferred names and pronouns at the beginning of a consultation. Healthcare providers also received a three-day workshop specific to providing gender-affirming healthcare. This training was crucial, as it is often lacking in the education of healthcare providers.

While providing gender-affirming hormone therapy was a priority, the programme was unable to meet the full demand, leading to a waiting list of more than 200 people. Hormone therapy was added to the South African Department of Health Essential Medicines List in 2019, but there is a limited supply for use in primary healthcare settings.

Bothma told aidsmap that the provision of gender-affirming healthcare in South Africa is impacted by societal stigma and discrimination at multiple levels. This has widespread impacts, including limited budgets for hormone therapy. While the centres are funded by the U.S. President’s Emergency Plan for AIDS Relief (PEPFAR), they are reliant on the South African government for the supply of hormone therapy.

This group consisted of mainly trans women (89%), with smaller numbers of trans men (5%) and gender non-conforming individuals (6%). The average age of services users was 26, less than half had completed high school (45%) and under a third were employed (29%). Of the 2,487 participants who reported earning any type of income, the majority (70%) earned far below the South African minimum monthly wage. Less than a quarter of those referred for clinical services reported renting or owning their residence (22%), while approximately 3% were homeless. These findings are indicative of the systemic barriers to education, employment and housing seen for trans people globally.

During the programme, 365 (10%) of those linked to clinical services were started on hormone therapy.

Prior to participation in the programme, 69% of the 3,535 participants linked to clinical services did not know their HIV status. Among the 706 participants who had tested negative in the previous 12 weeks, only 8% were taking PrEP. Only 5% of the total referred to clinical services reported any prior use of gender-affirming services in the formal healthcare sector, with hormone therapy being the most used service.

Eighty-six percent of the 5,636 participants referred to clinical services accepted an HIV test. Of the 86% who tested negative, 28% started PrEP. This represented a total of 1,165 participants – 44% of those who were eligible for PrEP and who had indicated some or great risk for getting HIV.

Of the 365 participants who started hormone therapy during the programme, 126 were linked to PrEP. The researchers found that there was no difference in continuing PrEP for ten months or more between those taking hormone therapy and those who were not. Additionally, there were no differences related to age or gender identity linked to continued use of PrEP for ten months or more.

At enrolment, 329 participants already knew their HIV-positive status, and 73% were on ART.

Another 687 participants, or 14% of those who were tested for HIV during the study, tested positive. Most started treatment (91%), and of these, most were retained in care (97%). At the time of the review, 77% of these 609 participants had been on treatment for six months or more and were eligible to receive a viral load test. Among the 416 participants who received a viral load test, 75% were virally suppressed (less than 50 copies).

Of the 365 participants who started hormone therapy, 40% were linked to HIV treatment. For those who received viral load tests, suppression was 90% among those taking hormone therapy (83 of 92 participants), higher than the overall cohort.

A central finding from the programme review was that, among people living with HIV, participants who were receiving hormone therapy were three times more likely to have a suppressed viral load (Odds Ratio = 3.01, p < 0.001) than those who were not.

“Our findings indicate that differentiated gender-affirming healthcare and HIV service delivery at a primary healthcare level is feasible in South Africa,” the authors conclude. “The service user numbers reached and the high referral rate from outreach services into the clinics suggest high acceptability and a high potential for this programme model to engage the transgender population in HIV services. We have shown that providing gender-affirming healthcare services, including hormone therapy, as a primary healthcare intervention significantly increases viral load suppression.”