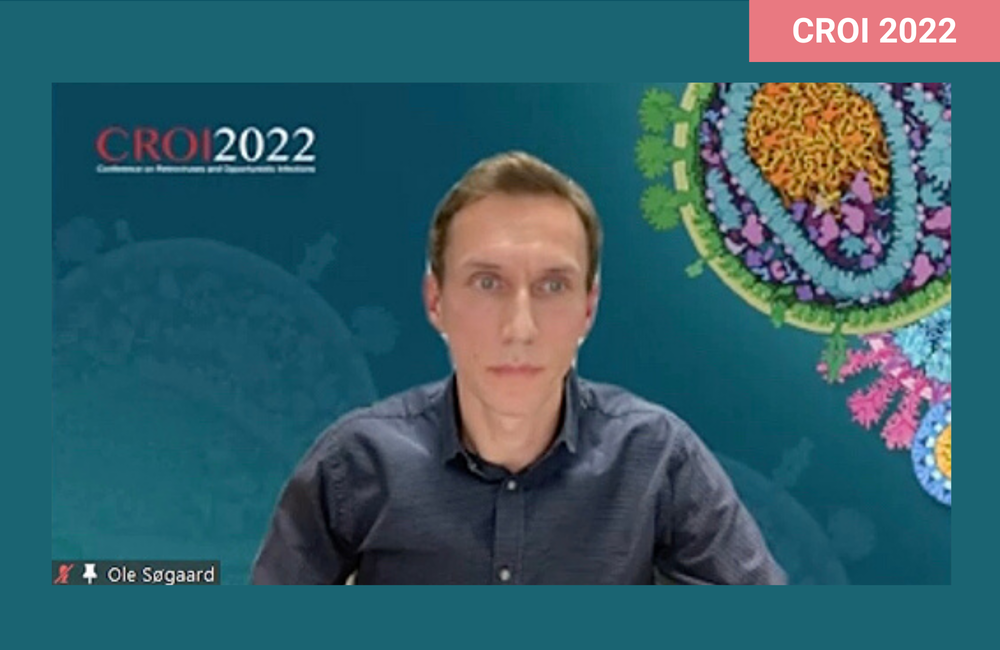 The Conference on Retroviruses and Opportunistic Infections (CROI 2022) yesterday included a widely reported study of a woman apparently cured of HIV after a stem-cell transplant. The same conference session also heard about another study participant for whom scientists are avoiding the word ‘cure’, but who has been off antiretroviral therapy (ART) with an undetectable viral load for over 3.7 years after he was given a combination of a broadly-neutralising antibody and a drug that prevents HIV-infected cells becoming latent and hiding from the immune system.

As with many such studies, this was an isolated case; he was one out of 59 people in the study, and only one out of the 20 people who maintained an undetectable viral load after stopping his ART in what’s called an analytical treatment interruption (ATI). But six other people were able to stay off ART for more than 12 weeks.

The study was based on the ‘kick and kill’ idea that underlies one of the approaches to curing HIV. One feature of HIV that makes it hard to cure is that, as a retrovirus, it inserts its DNA into the host DNA of a proportion of the immune cells of people with HIV. In the course of infection, some of these cells become long-lived memory cells, whose normal job is to stay quiet (or ‘latent’) until another infection by the same agent comes along. Vaccines work by creating a population of memory cells that are ready to combat the real infection when it turns up.

The problem with HIV is that the infected memory cells act as sleeper cells, invisible to the surveillance of the immune system. When antiretroviral drugs, which block HIV replication, are stopped, these cells start producing HIV again. This is why HIV infection is lifelong.

On its own, however, it does not lead, as it does in cancer cells, to the self-destruction of the activated cells. It became apparent that additional therapies were needed to provide the ‘kill’ and to stimulate the immune system to kill off the now-awakened infected cells. Antibodies were candidates because, although they cannot kill virally infected cells directly, they can alert other cells, like CD8 lymphocytes and natural killer cells, to do the job. In addition, antibodies can surround (‘neutralise’) viruses and block them from infecting other cells. Ones that are active against a wide variety of viral strains are called broadly neutralising antibodies (bNAbs).

The bNAb used in the present study, 3BNC117, has been used in cure studies before. In 2017, used alongside another antibody called 10-1074, it induced a remission of HIV infection to the monkey version of HIV in 13 animals; in 2018 the same duo apparently completely cured one monkey; and in another study in 2018 it enabled nine out of eleven people to stop their ART for five months before having to restart. This week, CROI heard about the same bNAbs being used to enable young children to stay off ART.

Cure studies in adult humans have tended to enrol people who have had HIV for many years. The new study is possibly the first to give adults who are recently infected and new to ART the combination of a bNAb and a latency reversing drug at the same time as they start antiretrovirals. It was hoped that by doing this, the result would be a permanently smaller reservoir of HIV-infected memory cells, and an increased state of immune activation against the ones that remain. Most viral DNA found in people’s reservoir cells consists of viral strains that were reproducing before ART was started. The earlier one limits the size of the reservoir, the less chance there is of viral mutations that can escape immune responses.

The eCLEAR Study was conducted by a team led by Dr Ole Schmeltz Søgaard of Aarhus University in Denmark, and took place at five sites in Denmark and two in London, UK. It enrolled 59 people recently diagnosed with HIV who had never taken ART, in four study arms:

Twenty-nine of the 59 participants had acquired HIV in the previous six months. Five were women, but due to a quirk of randomisation four of them were in the control arm. CD4 counts averaged nearly 500 and viral loads 49,000, but there was an extremely wide range in viral loads, from 740 to 24,000,000.

The decline in viral load was a product of two different processes – the ‘kick’ and the ‘kill’ happening together. The 3BNC117 antibody, in participants sensitive to it, produced a roughly 80% decline in the number of infected CD4 cells producing viral proteins. The first dose of romidepsin, on the other hand, produced a roughly twofold increase in productively-infected cells. Because the first romidepsin dose was given three days after the first antibody dose, this provided more cells that were ‘visible’ to the antibodies in participants given both therapies. But romidepsin ceased having any impact after its first dose and seemed generally to have a minor impact. Subsequent events in the study were largely influenced by whether participants were given 3BNC117 and whether they were sensitive to it, or not.

The most important lab finding from the study was that in people sensitive to 3BNC117, the number of CD8 cells sensitive to HIV (specifically, to its structural gag protein) was greatly enhanced. These are the important cells that kill off virally infected cells and their ‘memory’ for HIV tails off only gradually.

A year after starting therapy, only 0.1% of CD8 cells in the control group had immune reactivity to HIV. In contrast, 2.9% of cells in those given 3BNC117 and 1% in those given both therapies had HIV-sensitive CD8 cells. A strong anti-HIV CD8 response is known to be a central feature of most immune controllers, that is people who naturally control their HIV viral load without ART.

After one year there was also a greater decline in the number of CD4 cells carrying intact proviral DNA. This declined by 69% in the control group, by 82 and 84% in the two groups given 3BNC117, and by 78% in those given romidepsin alone.

In a second presentation, Dr Miriam Rosás-Umbert from the eCLEAR study gave further information on immune responses. The most distinctive property of the CD4 and CD8 cells in people given 3BNC117 and sensitive to it was that they produced significant amounts of the antiviral protein interferon-gamma (IFN-g) when they were exposed to the HIV gag protein as an antigen. In contrast, those resistant to 3BNC117 and those not given it in the first place barely produced any at all.

These immune markers may be used as guides, but in cure studies there is as yet no substitute for taking people off ART in an analytical treatment interruption (ATI) and seeing if their viral load rebounds. After 400 days on ART, participants were asked if they were willing to try an ATI and 20 agreed.

ART was restarted if the person’s viral load increased beyond the pre-specified limit of 5000 or if their CD4 count fell below 350. If neither had happened by 12 weeks, the investigators and patient discussed whether to continue the ATI or not.

Seven of the 20 participants were able to continue with the ATI for the full 12 weeks. Two of them had taken ART alone, one ART and romidepsin, one ART and 3BNC117, and three all of the interventions. Four out of the five people who were sensitive to 3BNC117 stayed on the ATI for 12 weeks; the exception was the participant who had started with a viral load of 24 million. Lower levels of intact proviral DNA were associated with a longer time to viral rebound.

Also, five of the seven participants who stayed on the ATI for 12 weeks had produced high levels of IFN-g. Most interestingly, higher levels of IFN-g production before the ATI were predictive of lack of viral rebound, providing possibly for the first time a marker for who may be able to stay undetectable on an ATI.

As mentioned, one of the participants remains off ART and undetectable with a viral load below 50 over 3.7 years after stopping ART. This participant started ART with one of the higher viral loads (200,000). His intact proviral DNA, as measured by two different assays, has continued to decline over the period. He maintains a very low viral load, detectable by ultrasensitive PCR tests, of 0.2 copies/ml.

He cannot therefore be regarded as a ‘cure’ in the sense of all HIV having disappeared from his body. But he can perhaps be called an example of a long-term remission, or extreme post-treatment control, or even of functional cure if he continues to control his own HIV at these low levels.

Søgaard emphasised that these are still early days for bNAb therapy. But he said that their time had come and he expected combinations of more powerful bNAbs, active against a broader variety of viral strains, would continue to be used as ARV drugs in their own right and also as a form of therapeutic vaccine, as in the eCLEAR study.