A simple HIV prevention cascade could be a powerful tool for advocates, policy makers and funders, researchers argue in The Lancet HIV. It could help us understand where the gaps in prevention are, to monitor implementation and to set meaningful targets.

Robin Schaefer of Imperial College London, Professor James Hargreaves of the London School of Hygiene and Tropical Medicine and colleagues aim to replicate the success of the HIV treatment cascade and UNAIDS’ 90-90-90 targets as advocacy and policy tools. “The HIV treatment cascade has shown how a unifying framework can become a driving force for programmes and policy nationally and internationally,” they say.

Other models of prevention cascades have been proposed before, sometimes specific to a particular prevention method (e.g. male circumcision or pre-exposure prophylaxis (PrEP)).  But the authors believe that we need a framework that can be used across prevention methods, populations and programmes. To be widely used, it should be simple (only including the core steps and essential determinants) and measure those core steps in a standardised way.

They propose a generic HIV prevention cascade which recognises that the use of prevention methods is behavioural, affected by social and structural forces. 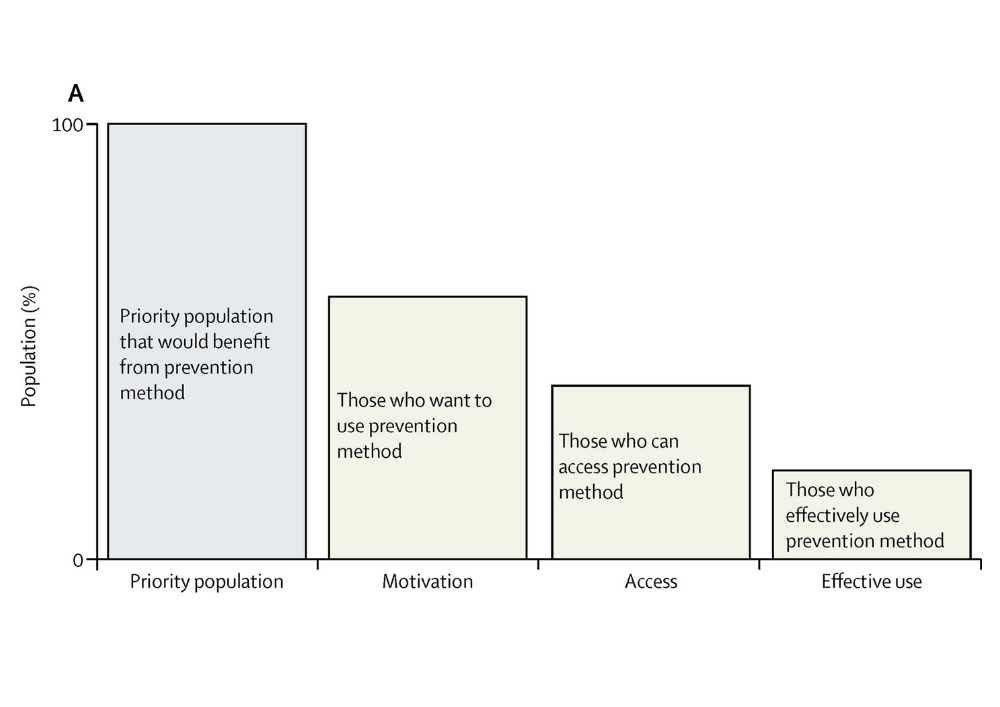 The authors give a practical example of how this cascade can be used for a specific method in a specific population – condom use among adult men in a province of eastern Zimbabwe.

A similar cascade for women in the same area highlighted different gaps. Far more women than men were motivated to use condoms, but a lack of partner support was even more important a factor preventing effective use. While most women could access condoms, a few could not.

Identifying the reasons for gaps in the cascade could help in the development of interventions. In this example, community-based interventions to make condoms more socially acceptable would appear to be a priority. Couples counselling and strengthening women’s rights might have an impact on effective use.

Schaefer and colleagues say that whereas this cascade covered a single prevention method, data could be combined in a combination prevention cascade. For example, this would show the proportion of people motivated to use any one of a number of prevention methods.

One of the challenges with the cascade is of having appropriate and accurate data to measure motivation, access and effective use. Relevant indicators are not routinely collected and may not even be available from research studies. To take the condom cascade in Zimbabwe as an example, the authors could not find data on motivation to use condoms specifically. Instead, individuals were classified as motivated if they perceived themselves to be at risk of HIV.

The authors have excluded additional steps for which it would be even harder to collect or calculate data – such as the number of HIV infections averted.

They believe that its simple three-step structure means that it can be widely used, in different settings and for different prevention methods. “The cascade can be used for advocacy, routine monitoring, and strategic planning,” they say.

Image credit: The core steps of the prevention method cascade graph, from the paper in The Lancet HIV.

AIDS 2022: How to tailor HIV prevention efforts to people’s needs

One of the hot topics at the recently concluded AIDS 2022 conference held in Montreal, Canada, was how HIV prevention interventions such as pills or injections that prevent HIV infection should be made available to different groups of people. Tiyese Jeranji spoke to some local experts and an activist about the rich set of discussions.
Spotlight
18 Aug 22
History of HIV & AIDS

At a time when most Thais avoided discussing safe sex and family planning, Mechai Viravaidya promoted condom use with spectacle and humor, saving millions of lives.
The New York Times
8 Aug 22
Women