During pregnancy, offering HIV testing at home doubles the proportion of male partners who test 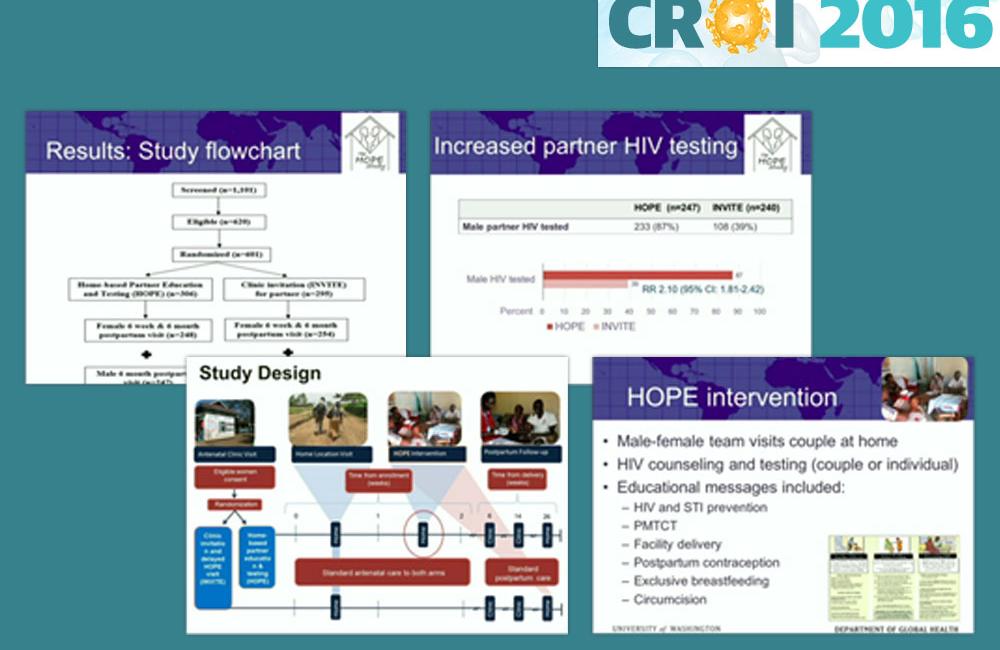 A programme of home visits, partner education and HIV testing for couples in Kenya was able to double the proportion of men who tested during their partner’s pregnancy, Carey Farquhar of the University of Washington told the Conference on Retroviruses and Opportunistic Infections (CROI 2016) in Boston yesterday. Partners became aware of each other’s HIV status without this being linked to an increase in intimate partner violence.

Whereas HIV testing is widely offered to women attending antenatal clinics, there are fewer opportunities for men to test. In African countries, no more than a third of men take an HIV test during their female partner’s pregnancy, but there are particular advantages to engaging with men at this time.

The male partner may strongly influence decisions affecting women’s reproductive health. Pregnant women who are diagnosed with HIV during individual HIV counselling and testing, without the support of their partner, may be afraid of disclosing their HIV status to him. Moreover they are less likely to adhere to HIV treatment during pregnancy and other interventions to prevent mother-to-child transmission.

In the case of a couple where the man has HIV and the woman does not, lack of male partner HIV testing may result in the woman seroconverting to HIV during pregnancy or breastfeeding (a period of elevated transmission risk). A woman who has herself just become HIV positive would have a very high viral load, putting her at exceptionally high risk of passing the infection on to her child.

Several interventions have been shown to modestly improve HIV testing rates in male partners, but have not had the large effect seen in the study presented yesterday. These interventions have included letters to invite male partners to attend HIV testing at antenatal clinics, making antenatal clinics more ‘male friendly’ and adapting post-test counselling for women so that it develops their communication skills and self-efficacy.

Visiting homes, door to door, and offering HIV testing and other health interventions has already proved to be feasible and acceptable in many African countries. In some programmes, both members of a couple may be counselled and tested at the same time – the partners are encouraged to share their test results.

The HOPE programme in Kisumu, Kenya built on this experience. In couples randomised to receive the intervention, women did not take an HIV test at the antenatal clinic but the couple were given an appointment for a male/female pair of community health workers to make a home visit. Both the male and female partners were offered HIV counselling and testing, with the choice of whether it would be done together as a couple or individually. In addition, the couples received educational messages about HIV, male circumcision, childbirth in health facilities, exclusive breastfeeding and postpartum contraception.

In those randomised to the control arm, women took an HIV test at the antenatal clinic, were counselled on encouraging their partners to test, and male partners received a letter inviting them to HIV testing. All other aspects of care were identical.

Six months after the birth, both men and women provided data on outcomes.

620 women met the study’s eligibility criteria and only 19 refused to take part. Their average age was 25 and almost all were living with their partner.

In line with the local HIV prevalence, one in five women were HIV positive, with half being diagnosed for the first time.

In the intervention arm, 87% of men took an HIV test, compared to 39% in the control arm. Test uptake was therefore doubled (rate ratio 2.10).

Rates of couple testing and disclosure were also significantly higher in the intervention arm:

The pre-test and post-test counselling of the programme was designed to help couples disclose their status to each other in a safe way and to defuse tensions. Nonetheless the potential for partner violence is a concern for any couples testing programme. Before randomisation, 6.5% of women screened had recently experienced or were at risk of intimate partner violence – these women were not enrolled in the study. There were twelve reports of violence in the intervention arm and six in the control arm, but none were considered by the participants or researchers to be related to HIV testing or the study.

Carey Farquhar said that qualitative work showed that the intervention was appreciated for bringing couples together to talk about important issues to do with HIV, pregnancy and their family.

She concluded that a home-based approach is effective in improving male partner testing and is safe. Preliminary analyses also suggest that it is cost-effective, she said.