PrEP use rising in San Francisco, but scaling up could further cut new infections 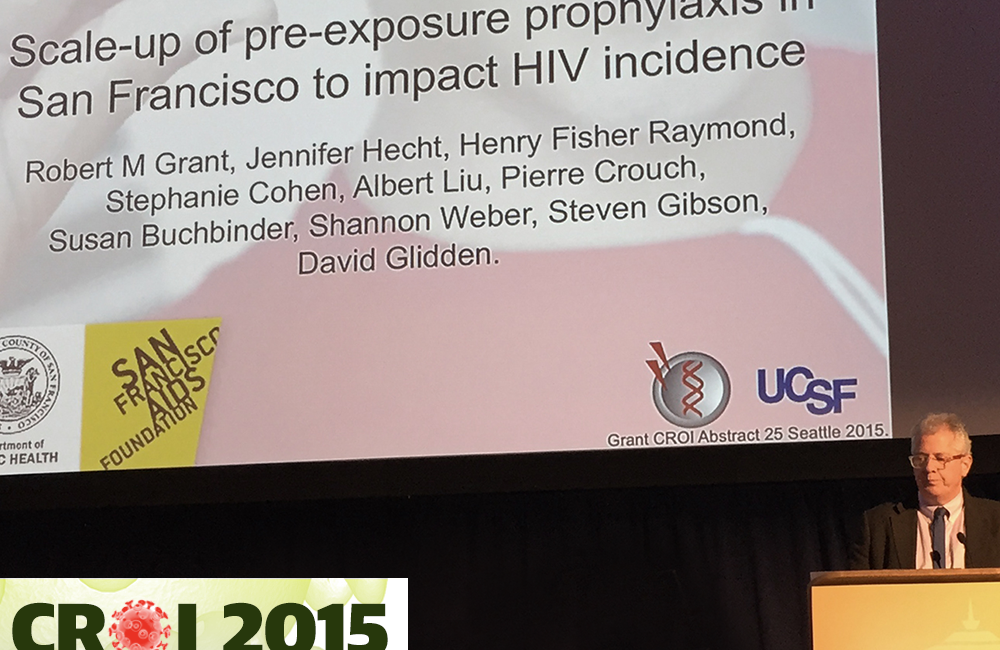 Robert Grant presenting at CROI 2015. Photo by Liz Highleyman, hivandhepatitis.com
This article is more than 8 years old. Click here for more recent articles on this topic

Use of Truvada (tenofovir/emtricitabine) pre-exposure prophylaxis, better known as PrEP, is increasing in San Francisco, but it is still only reaching about one-third of people who could benefit, and wider use could reduce new HIV infections by 70%, according to a report yesterday at the Conference on Retroviruses and Opportunistic Infections (CROI 2015) in Seattle, USA.

PrEP was a major theme of the first day of the conference, with new data from the English PROUD study and French Ipergay trial confirming evidence from the earlier multi-national iPrEx trial and its open-label extension (OLE) showing that Truvada, when taken regularly, effectively prevents HIV infection among gay men.

Robert Grant from the UCSF Gladstone Institutes, the primary investigator for iPrEx, presented findings on the scale-up of PrEP and its impact on HIV incidence in San Francisco.

San Francisco is an ‘early adopter’ which has frequently provided proof-of-concept for new HIV prevention and treatment strategies. The city has a relatively small population with a large LGBT community, politicians and public health officials who prioritise HIV and a strong network of HIV/AIDS research and services.

In early 2010, San Francisco was the first to recommend prompt antiretroviral therapy (ART) as soon as a person is diagnosed with HIV, which is now part of the US treatment guidelines. The city was one of two US iPrEx sites and started one of the first PrEP demonstration projects. Interest in PrEP in the city began rising after the US Food and Drug Administration (FDA) approved Truvada for that purpose in 2012, with demand accelerating in mid-2013.

Since 2007, the rate of new HIV diagnoses has fallen in San Francisco, reaching 359 cases in 2013. The city does well in terms of the HIV care cascade, with an estimated 94% of people with HIV being diagnosed (compared with 86% for the US as a whole), 84-91% prescribed antiretroviral therapy and 62% achieving viral suppression (compared with 30% nationwide).

Grant’s team developed a model to forecast the number of HIV transmissions in the setting of expanded PrEP use, asking what PrEP coverage goal would be needed to reduce new infections by 70%.

Among eligible San Francisco participants in OLE, 81% remained on PrEP at 12 months, with most drop-outs occurring during the first few months. The city had the highest adherence of any site, with 92% having protective drug levels consistent with taking PrEP at least four times per week, as indicated by tenofovir concentrations in dried blood spots.

A November 2014 survey of clients at the city's main sexually transmitted infection (STI) clinic, which largely serves men who have sex with men, found that 16% were on PrEP and 60% wanted it, indicating that current use was 26% of desired use. Other surveys in 2014 found that similar proportions of gay men were taking PrEP, in the 10-15% range.

Extrapolating these study findings to the citywide population of 50,000 men who have sex with men (heterosexual men account for only 1% of the San Francisco epidemic), the researchers estimated that there were 16,089 HIV-negative individuals at substantial risk of infection, including:

The total number of people reporting PrEP use at any time during the past year was 5059, indicating that 31% of eligible people were using PrEP.

At the current viral suppression rate of 62%, the decline in new infections from 426 cases in 2012 to 359 in 2013 is consistent with PrEP uptake reaching 65% among people with the highest level of HIV risk.

Keeping the same viral suppression rate, PrEP use would have to reach 95% among people at the highest risk to bring new infections down by 70%. The current level of PrEP use is just 29% of the level required to reduce incidence by 70% (4098 people on PrEP out of 14,167 who would need to be).

If the viral suppression rate rose to 90% and PrEP use were 95% among people at highest risk, the number of new infections could approach 50 per year. At this point, the protective effect of PrEP would diminish because so many people with HIV would have undetectable viral load and exposure to untreated HIV infection would become uncommon.

The researchers concluded that while PrEP use has increased recently, the current level of use is only about one-third of the goal for dramatically reducing new infections.

Grant emphasised that the benefits of ART leading to viral suppression – or treatment as prevention – and PrEP are expected to be additive, suggesting that a dual strategy may be the best way to eliminate new HIV infections in San Francisco.