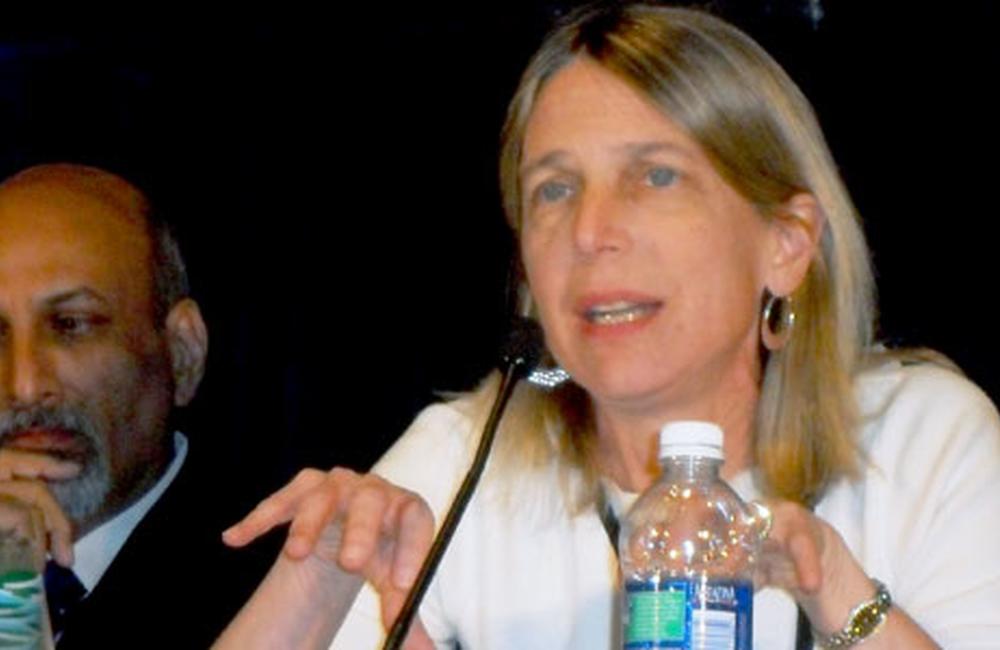 Salim Abdool Karim and Diane Havlir at CROI 2011. Photo by Gus Cairns/aidsmap.com
This article is more than 11 years old. Click here for more recent articles on this topic

Starting HIV treatment within two weeks of tuberculosis (TB) treatment is most necessary in patients with CD4 counts below 50 cells/mm3, while a slightly longer delay does not appear to be harmful for those with less advanced disease, two large international trials have shown.

The findings were reported on the opening day of the 18th Conference on Retroviruses and Opportunistic Infections in Boston.

The results confirm and extend the results of the CAMELIA trial, reported last year at the Eighteenth International AIDS Conference in Vienna, which showed that immediate antiretroviral treatment reduced the risk of death in TB patients by one-third when compared to waiting for eight weeks, in a population of Cambodian patients with a median CD4 count of 25 cells/mm3.

There have also been concerns about the use of antiretroviral drugs alongside the four-drug intensive phase of TB treatment, which usually lasts for the first eight weeks of TB treatment.

However in 2009 the World Health Organization issued new guidelines recommending that antiretroviral therapy should be started as soon as possible after starting TB treatment in co-infected patients.

The studies presented today shed further light on the question of how soon treatment needs to start, although the findings are likely to be of greater relevance in settings where CD4 counts are available to guide decision-making.

Three years ago the investigators of the SAPIT study reported in the New England Journal of Medicine that starting antiretroviral treatment soon after starting TB treatment significantly reduced the risk of death from all causes when compared to delaying the initiation of treatment until after the completion of TB treatment.

The SAPIT trial continued to follow patients randomised either to start treatment immediately or to wait until the completion of the intensive phase of TB treatment.

Professor Salim Abdool Karim of the Centre for AIDS Programme Research in South Africa (CAPRISA) presented final findings from the SAPIT study. The trial was conducted among people with HIV infection who had been diagnosed with smear-positive pulmonary TB in Durban, South Africa. The trial recruited individuals with CD4 counts below 500 cells/mm3.

The median CD4 count at baseline was 150 cells/mm3.

All participants in the study received a regimen of ddI, 3TC and efavirenz, designed to be dosed once daily at the same time as directly observed short-course TB treatment. Participants also received cotrimoxazole prophylaxis.

The primary endpoint of the study was the measurement of changes in all-cause mortality and new AIDS-defining illnesses.

The trial, showed that after two years of follow-up, there was no significant difference in the risk of AIDS or death between the early and later treatment groups, with an event rate of 6.9 and 7.8 per 100 person years of follow-up respectively in the two arms (p = 0.73).

Early treatment was associated with a 68% reduction in the risk of death or AIDS when compared to later treatment among those with CD4 counts below 50, and the incidence rate ratio was 0,32 (p = 0.06). The rate of IRIS was almost five times as high in the early treatment group (odds ratio 4.7, p = 0.01).

In patients with baseline CD4 counts above 50 cells/mm3 there was no significant benefit to early treatment, but a 2.2-fold higher risk of developing IRIS and a 6.8-fold higher risk of switching at least one drug in the antiretroviral regimen as a result of drug toxicity.

There was no significant difference between the two arms in rates of TB treatment completion or viral suppression.

“It really depends on clinical judgment and the capability of the facilities to manage cases of IRIS, and the availability of second-line drugs for switching cases of toxicity,” said Professor Karim.

A second international study, carried out by the US AIDS Clinical Trials Group at 26 sites in four continents, compared immediate and post-intensive phase initiation of ART in 906 individuals with confirmed or suspected pulmonary TB.

The study recruited 906 patients with CD4 counts below 250 cells/mm3, and stratified randomisation by CD4 count above and below 50 cells/mm3. All patients received standard TB treatment, cotrimoxazole prophylaxis and antiretroviral therapy consisting of tenofovir, FTC and efavirenz.

The median CD4 count in the study population was 77 cells/mm3.

The primary endpoint of the study was the proportion of patients who died or developed a new AIDS-defining illness during 48 weeks of follow-up after initiation of TB treatment.

There was no significant difference between the two study arms in primary endpoint outcomes across the study population as a whole (12.9% in the immediate arm vs 16.1% in the early arm, p = 0.45), but when investigators looked at primary endpoint outcomes in the participants with baseline CD4 counts below 50 cells/mm3, they found a significantly lower rate of death and new AIDS events in the immediate treatment group (15.5% vs 26.6%, p = 0.02).

There was no significant difference in deaths and new AIDS events between the two arms in patients with CD4 cell counts above 50 cells/mm3 (11.5% vs 10.3%, p = 0.67). Deaths were predominantly due to TB, cryptococcal disease, and pneumonia.

There was no significant difference in CD4 counts or viral load suppression at week 48 between the two groups.

A significant difference in the rate of IRIS was noted, with patients in the immediate treatment group 2.5 times more likely to develop IRIS (p = 0.001), although no deaths occurred in the study as a consequence of developing IRIS.

Professor Diane Havlir told a press conference that with results from three major trials all telling clinicians the same thing, it was time to speed up integration of TB services and HIV services in order to treat the patients with the most advanced HIV disease quickly. “Minutes matter” for these patients, she said.

Asked whether the findings of the STRIDE and SAPIT studies should lead to a change in guidelines, Professor Salim Abdool Karim said: “I personally think the guidelines were somewhat aggressive.”

However in practical terms the findings are unlikely to affect WHO recommendations, since the key finding of both studies – that antiretroviral treatment may be slightly less urgent in patients with CD4 counts above 50 – requires access to CD4 cell counting, which remains out of reach in many areas where the burden of HIV and TB co-infection is highest.

You can also watch a webcast of the presentations made at this conference session, including the speakers Diane Havlir and Salim Abdool Karim.

Webcast from TB and Opportunistic Diseases.

These results signal the start of a new chapter for people with drug-resistant (DR)-TB who currently face lengthy treatment regimens of up to 20 months that can include painful injections and up to 20 pills a day that can cause severe side-effects.
MSF
20 Oct 21
Treatment guidelines

Johnson & Johnson, which markets bedaquiline under the brand name Sirturo, has been accused of employing unfair tactics in an attempt to retain the drug’s patent and tighten its grip on the monopoly. Critics say this maintains high prices and makes the drug inaccessible to many, despite the involvement and contribution of public and philanthropic institutions in its development.
Devex
29 Jun 20
More editors' picks