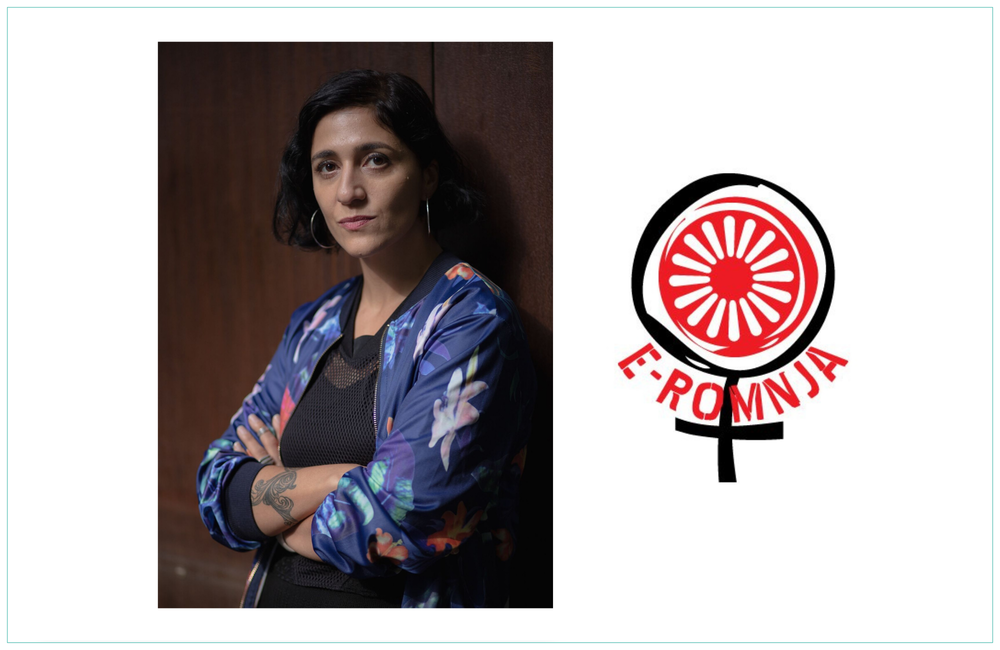 Roma women across Europe face discrimination and abuse, including when accessing sexual and reproductive health care. The experiences described by Roma women are often far from the respectful, dignified care that is their right.

Carmen Gheorghe is the founder of E-Romnja, a feminist Roma organisation based in Romania, which works to nurture and support Roma women to own their power, share their stories and catalyse change. We spoke to Carmen about her work.

Some people reading this may be hearing about the discrimination experienced by Roma women for the first time. Could you explain some of the issues?

Historically and in literature, Roma woman are portrayed in negative and prejudiced ways and these stereotypes persist. There are oppressive systems within the Roma community and outside it, and Roma women face institutional racism, classism, and sexism. We are constantly fighting these systemic issues and this historical background. This is why intersectionality is important for our work.

Because of these systemic issues, Roma women have higher rates of illiteracy and school drop-out; they lack access to job opportunities; and with the lack of education and work comes poor social situations and housing. This is before we even begin to talk about issues like high levels of violence and abuse.

There’s also historical and political context that should be emphasised when we talk about sexual and reproductive rights for Roma women. It’s important to acknowledge that in south eastern Europe, hundreds of Roma women went through forced sterilisation.

The power of women to procreate plays an important role in racist and xenophobic discourse. We all know about Europe’s racist history but even in current political discourse we hear about fertility and controlling women’s bodies. In many countries and especially in Romania, we hear that Roma women are too fertile, have too many babies, and that this will change how Romania looks. This kind of racist discourse should be acknowledged and properly sanctioned, especially when it happens at a political or institutional level.

What do Roma women say about accessing sexual and reproductive health care?

When we talk about sexual and reproductive rights for Roma women, the main issues they face are racism in the health system and the accessibility of services. Even if services exist, they are often too expensive and far away.

For example, if doctors see Roma women dressed in a traditional way or if they don’t speak perfect Romanian, they will not treat them or will make them wait a long time. If you travel 50km to see a gynaecologist and then you have to wait 7 or 8 hours to be seen, you are not going to come back. This kind of treatment, which doctors use to discourage women, is an insidious form of racism. It is difficult to go to an equality body and claim this kind of treatment as racism, but it exists.

This year, we launched a report of research undertaken in Romania, Italy and Finland. It includes testimonials from Roma women about accessing health care, especially about reproductive rights. Labouring is a very sensitive topic for a lot of women. Roma women’s experience of hospital birth is often from emergency hospital services and the quality of service they experience is just horrible, especially in Romania. They describe having doctors yelling at them and treating them very badly.

You founded E-Romnja as a feminist Roma organisation. What kind of grassroots work do you do?

When we began doing community work, Roma women mostly talked about infrastructure – housing, electricity, health care. Some of the issues were ‘women’s issues’, but many were not. This is why we say, “any issue that affects women’s lives is a feminist issue”.

From the beginning, it was a process of listening. We developed a methodology, SORA, which means ‘sister’ in Romanian. It’s an acronym of Study, Organise, Revendicate and Advocate.

When we go into a community, we listen to what women want to say about it. After we ‘study’ the community and learn from women, then we start to ‘organise’.

Women have a lot of power and ability that they are unaware of. They manage households, care for the elderly, engage with institutions. Roma women also have this great ability to cook and it is a strength. They organise big gatherings, feeding people and talking about issues in the community. We don’t give them abilities; we make them aware of the power and abilities they have.

Then we start a dialogue with the authorities. If the authorities don’t support the work the women are doing, the next step is to ‘revendicate’: to organise local protests, collect signatures on petitions, attend local council meetings and talk with local politicians. In the final step of the process, women start to ‘advocate’: to give interviews for newspapers, be present online, and participate in conferences.

Are there examples of activity around sexual or reproductive health care?

Reproductive rights always come up in the conversation with women. For example, in 2015, the Romanian government had a national programme of cervical screening. Tests were supposed to be free, regardless of whether women had health insurance.

But the women in our communities were not offered screening. At least 50 women complained that their doctor was refusing to test them, saying it was only for women who had health insurance. We started to discuss this with doctors, and they said again, it’s not free and these Roma women do not have insurance. So, we held a protest in front of a hospital where the manager was refusing to provide tests. Then we wrote to the Ministry of Health and they confirmed the test should be free. With this letter from the ministry, the women could get their free tests.

But this is not the end of the story. After this, the National Institute for Public Health approached us and developed a programme in which they went to these communities in a mobile caravan, to make services more accessible.

You’ve also been involved in work at national and international levels – how do you approach that?

At E-Romnja, we work from bottom to top. The knowledge produced at the bottom must be reflected in policies, strategies and discourse at the top. Everything we learn from the community, we try to bring to different levels.

We bring our intersectional approach wherever we can and we also try to work with our partners to infuse them with these values.

It is a slow process but I am optimistic. If I think about when I started this work, there were so few people speaking about Roma women or intersectionality and we’ve come a long way. We are building spaces that Roma women like me didn’t have. We are creating the space for younger generations to step into.

This feature appeared in the December edition of the Eurobulletin.

High rates of starting and staying on PrEP in pregnant South African women, despite barriers

Local and national governments in west and central African countries must prioritise investment in providing access to HIV testing for all pregnant women.
The Conversation
11 Jan 21
Government, leadership & policy