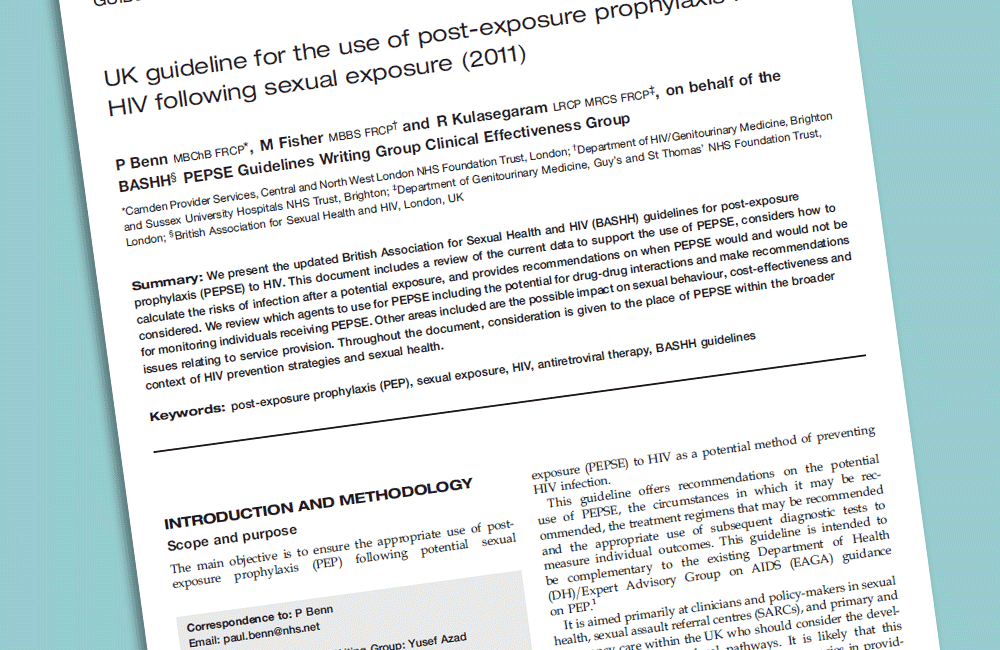 New UK guidelines for the use of post-exposure prophylaxis (PEP) following sexual exposure have been published in the December issue of the International Journal of STD and AIDS. The guidelines are notable for no longer recommending that PEP is provided in a number of situations where the ‘source partner’ is known to be HIV-positive and to have an undetectable viral load.

The guidelines are issued by the British Association for Sexual Health and HIV (BASHH) and the British HIV Association (BHIVA) and replace the previous document, issued in 2006.

Post-exposure prophylaxis is an emergency measure aiming to prevent HIV infection after possible exposure to the virus. PEP consists of three or four anti-HIV drugs, taken for one month. The guidelines say that it is “crucial to consider PEPSE as only one strategy in preventing HIV infection and, as such, it should be considered as a last measure where conventional, and proven, methods of HIV prevention have failed.”

When considering whether PEP should be provided, the document recommends that clinicians consider:

The guidelines are also notable for not recommending PEP in any situation in which the source partner is thought not to belong to a social group in which HIV prevalence is high. In other words, if a person’s sexual partner was not thought to be either a gay man or a migrant from a high prevalence country (such as in sub-Saharan Africa), PEP would not normally be given following sexual exposure.

The guidelines also clarify that, due to the very low risk of infection, PEP is unnecessary following human bites or contact with a discarded needle.

The table below summarises this part of the guidelines.

* When the guidelines say that PEP should be ‘considered’, it should only be given if there is an additional factor which increases the likelihood of transmission, such as particularly high local HIV prevalence, a sexually transmitted infection, acute HIV infection in the source partner, sexual assault or trauma, bleeding (including menstruation) or - in the case of vaginal sex - the HIV-negative male partner not being circumcised.

PEP should only be provided when the patient presents within 72 hours (three days) after exposure. The sooner PEP is taken, the more effective it is.

The recommended combination of drugs is Truvada (tenofovir and FTC) and Kaletra (lopinavir and ritonavir). This combination could be modified if the ‘source’ partner was known to be HIV-positive and to have resistance to certain anti-HIV drugs. Another reason to modify the drugs given is if the patient is already taking other medication which may interact with the ARVs (e.g. statins or emergency contraceptives).

In the previous guidelines, a combination of two nucleoside / nucleotide reverse transcriptase inhibitors and one boosted protease inhibitor was also recommended, but equal weight was given to a number of different drug options.