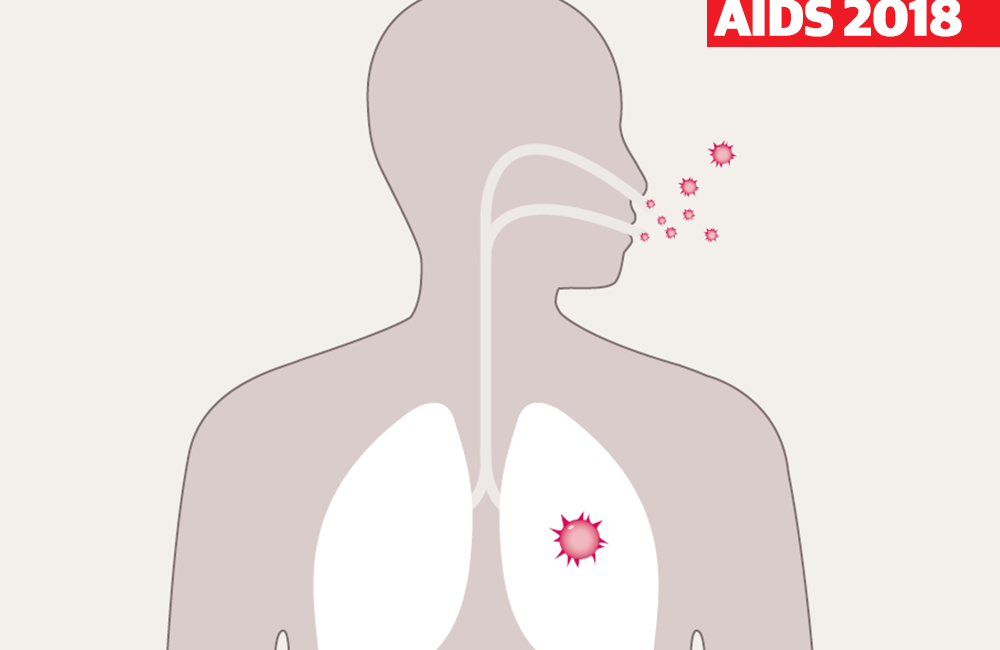 Dolutegravir-based antiretroviral therapy (ART) is effective and safe when taken at the same time as standard tuberculosis (TB) therapy, according to an international study presented at the 22nd International AIDS Conference (AIDS 2018), held in Amsterdam in July.

After 48 weeks of therapy, 75% of people had an undetectable viral load, comparable to the rate of viral suppression observed among people treated with efavirenz. The treatment was safe, with few people experiencing serious adverse events and reported side-effects were generally mild. TB therapy was successful in almost all people.

ART based on dolutegravir is now recommended by the World Health Organization as a preferred regimen for both first- and second-line therapy. Dolutegravir-containing therapy is known to have good long-term virological efficacy and a favourable safety profile. Moreover, the drug also has a high barrier to resistance and low potential for interactions with other medications.

Establishing the efficacy, safety and optimum dose of dolutegravir for HIV-positive people who are also taking therapy for TB is a current research priority. Efavirenz-based ART is widely used in the context of HIV/TB co-infection, but alternative regimes are needed, especially because of this drug's side-effect profile and also in settings where there is a high rate of transmitted resistance to efavirenz and other drugs in the non-nucleoside reverse transcriptase inhibitor (NNRTI) class.

Investigators designed a 48-week study to establish the virological efficacy and safety of ART based on dolutegravir 50mg twice daily in people taking rifampin-based TB treatment.

The phase IIIb study was multi-centre and open-label. A total of 113 people were recruited at 37 sites in seven low- and middle-income countries. The participants were randomised to receive dolutegravir or efavirenz.

The study was not intended to be comparative, and the primary end-point was the proportion of dolutegravir-treated people with a viral load below 50 copies/ml after 48 weeks of therapy. Data were also gathered on virological response among the efavirenz-treated people, changes in CD4 cell count, the incidence and severity of adverse events and side-effects, the rate of TB- and non-TB-related immune reconstitution inflammatory syndrome (IRIS), the proportion of people discontinuing therapy or developing resistance and the success of TB therapy.

A total of 69 people were randomised to receive dolutegravir and 44 to take efavirenz. The two groups were well matched. Median age was 32.5 years, between 36% and 43% were female, median viral load was 125,000 to 160,000 copies/ml and baseline CD4 cell count was a little over 200 cells/mm3. Two-thirds of people took the study drug in combination with tenofovir/emtricitabine. Almost all the participants had pulmonary TB.

Most people reported a side-effect. But for the most part, these were mild.

There was a low incidence of TB-related and non-TB-related IRIS (7% for dolutegravir; 9% for efavirenz). Very few people experienced significant elevations in liver enzymes and none stopped treatment because of drug-induced liver injury.

On the basis of these findings, the investigators concluded that dolutegravir 50mg twice daily in combination with other antiretrovirals is effective and well tolerated in adults with HIV/TB co-infection who are also receiving rifampin-based TB treatment.

Over the next five years, the national Department of Health plans to initiate a system that supports potential tuberculosis patients from the moment they come into contact with a health provider – public, private or traditional – to know their test results and link them to help, all within a week, and will also introduce a shorter treatment regime for children with non-severe TB.
Medical Brief
22 Sep 22
TB treatment

Researchers have significantly strengthened the safety profile of a watershed treatment course for highly drug-resistant strains of tuberculosis — a heartening breakthrough set to change the lives of millions of MDR-TB patients around the world.
Health Policy Watch
2 Sep 22
Drug-resistant TB

Early treatment for HIV might make a big difference in treating not only HIV but also latent TB, but the  real value of the finding is identifying chronic immune activation as the main driver of latent TB reactivation following HIV infection.
Infectious Disease Special Edition
16 May 22
More editors' picks