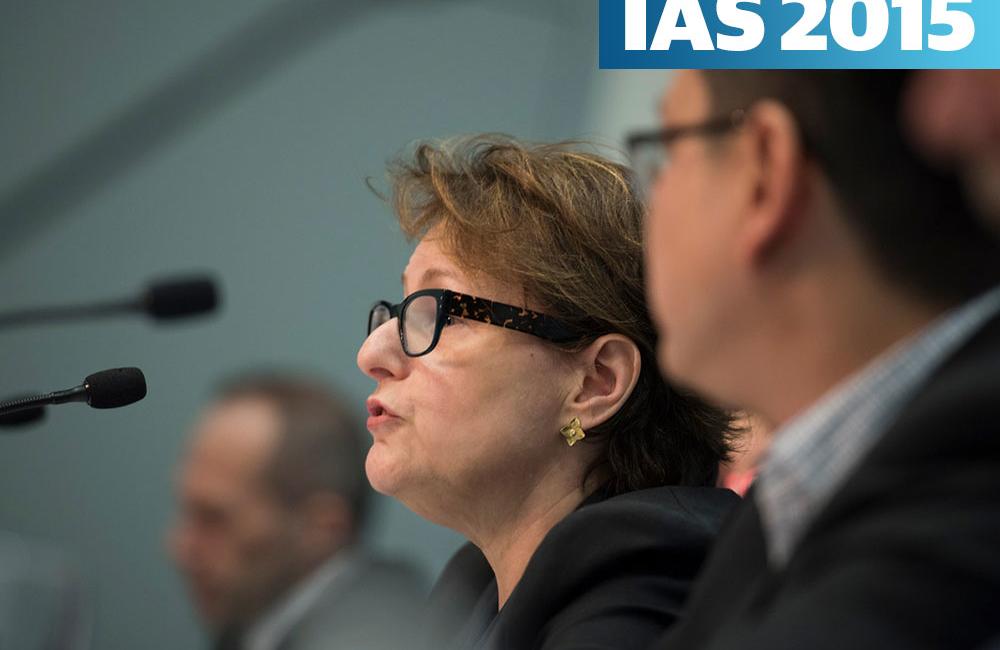 Beatriz Grinsztejn at IAS 2015. Photo © Marcus Rose/IAS 2015
This article is more than 7 years old. Click here for more recent articles on this topic

The first data from a Brazilian open-label demonstration project of HIV pre-exposure prophylaxis (PrEP) show, in common with several other studies presented at the Eighth IAS Conference on HIV Pathogenesis, Treatment and Prevention (IAS 2015) in Vancouver, Canada, last month, that the higher a person’s risk of HIV, the more likely they are to seek and use PrEP.

For the first time in a PrEP study, PrEP Brasil was able to demonstrate high uptake and interest among a relatively small but significant group of transgender women.

These initial data were presented by Beatriz Grinsztejn of Brazil’s Oswaldo Cruz Foundation (FIOCRUZ), Brazil’s public health research institute in Rio de Janeiro, which among many other functions, runs an HIV clinic.

The demonstration project enrolled men who have sex with men (MSM) and transgender women between April 2014 and April 2015 at FIOCRUZ and at two sites in São Paulo at the city’s University clinic (USP) and its Referral Centre for HIV Treatment, CRT.

Dr Grinszstejn told the conference that HIV prevalence among men who have sex with men and transgender women in Brazil was very high in some locations. In the capital city, Brasilia, nearly one in four MSM has HIV; in Rio de Janeiro and São Paulo HIV prevalence in MSM is 18% and 15% respectively. Other regional cities such as Salvador (at 6.5%) and Recife (at 4%) have lower prevalence, but even Manaus in the heart of Amazonia has 8% prevalence.

At the USP site, the study was advertised but clinic attendees were responsible for self-referral; at the other two sites, referral could be by attendees or by their physician. Nine hundred and eighty-six people were approached or referred themselves. Of them 82 (8%) turned out to have HIV while 106 did not fit the risk criteria. The remaining 798 were invited to an initial screening visit and of them, 490 (61%) attended. At this point, three more tested HIV-positive and some others were disqualified from the study for clinical reasons such as chronic kidney disease; 427 attended their first enrolment visit.

Four hundred and nine people eventually started PrEP, just over the 400 initially planned for. This represents a 51.25% uptake of PrEP in all those who were potentially eligible. Six per cent (24 individuals) were transgender women: although this is still a relatively small number, it represents the largest proportion of trans* people so far recruited in a PrEP study and it is encouraging that 67% of potentially eligible transgender women started PrEP.

A higher proportion of potentially eligible people (78%) at the entirely self-referred USP site started PrEP than at either of the other two sites (62.5% at CRT and 38.5% at FIOCRUZ – qualitative research will try to elucidate the differences in recruitment rates).

Other predictors of enrolment among those eligible included having a steady partner – 58% of these joined – and how likely people thought it was that they might become HIV-positive in the next year. Among those who thought the chance of their acquiring HIV in the forthcoming year was from zero to one-in-four, 43% started PrEP; among those who thought the chance was between one-in-two and certain, 61% started. Two-thirds of those potentially eligible had had an HIV test in the preceding year; of those, 58% enrolled versus 34% who had not tested. Six in ten had heard of PrEP before and of those, 59% enrolled versus 38% who had not heard of it.

Among those who self-referred, 62% who met the criterion of having had more than two condomless sex partners in the last year attended the screening visit, and 64% of those who had had two or more HIV-positive partners (versus 47% who had not had an HIV-positive partner, and 42% who did not know). In multiple regression, the strongest predictors of attendance at the screening visit were having two or more condomless sex partners (80% more likely to attend) and the strongest predictor of enrolment was being a transgender woman (64% more likely to enrol).

PrEP Brasil is still running and its final results will be presented next year. See http://prepbrasil.com.br for the study’s web page (in Portuguese).