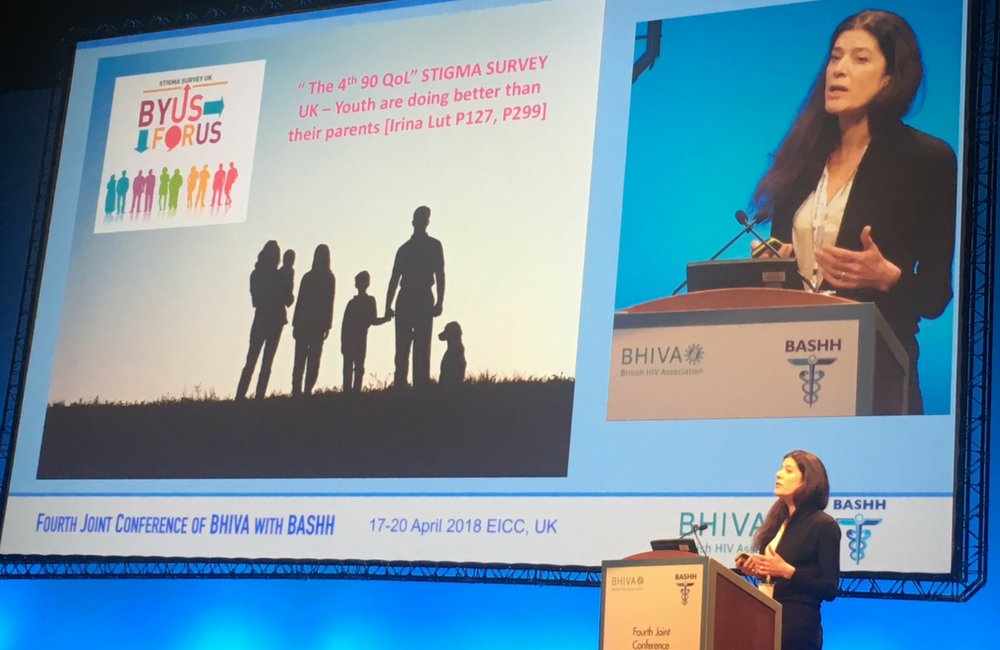 Among people who were born with HIV and have now transitioned to adult care at St Mary’s hospital in London, 80% have an undetectable viral load, rising to 87% in those aged 25 and older, according to data presented at the joint British HIV Association (BHIVA) and British Association for Sexual Health and HIV (BASHH) conference in Edinburgh last week. While a significant minority do find adherence challenging and deal with serious illnesses, the situation tends to improve as people get older, the conference heard.

Also, data from the People Living with HIV Stigma Surveys UK showed that young people were more likely to have a positive self-image and better adjustment to their diagnosis than other adults living with HIV.

In the United Kingdom, a generation of children who acquired HIV in the womb, during childbirth or through breastfeeding has now grown up. At the same time, thanks to effective prevention during pregnancy and childbirth, very few new infections occur in infants. In 1996, over nine in ten of those who had acquired HIV in childhood were still under the age of ten. By 2016, over seven in ten of this group were aged 15 or over.

Adolescence can be a turbulent, transitional time of biological, psychological and social changes. This may be further complicated by having a health condition – especially one that is stigmatised and is sexually transmissible. Studies from around the world have shown that adolescents usually have poorer engagement with care and worse outcomes than other people living with HIV, at all stages of the HIV treatment cascade.

The UK studies presented at the conference are somewhat more encouraging.

Dr Caroline Foster presented data from St Mary’s, London’s leading hospital for the care of children living with HIV. During adolescence, care is ‘transitioned’ from the family HIV clinic to a youth clinic that is located within the adult HIV department. This is a gradual process in which the young person is supported to take more responsibility for managing his or her own healthcare. The youth clinic is staffed by a doctor, clinical nurse specialist, peer support worker, psychologist, dietitian and pharmacist.

The review included all 182 patients who were born with HIV and who transitioned to the youth clinic between 2006 and 2017. Their current ages range between 18 and 33 years, with half being 22 years or under. Just over half are female and 85% are of black African ethnicity.

Retention in care has been very good, with 158 (87%) still attending HIV services at St Mary’s. Sixteen people have transferred their care to other services, four have been lost to follow-up and four have died. Foster attributed the success to the holistic care provided and lowering barriers to young people re-engaging with care – for example not needing to have an appointment.

Although many of those in their late teens and early twenties struggle with adherence to medication and engagement with care, things often improve once patients reach their mid-twenties. “They get there in the end, but sometimes you have to be quite creative in supporting them through that period,” Foster said.

This was corroborated by an analysis from the adolescent clinic at another London hospital, the Mortimer Market Centre. Among those in their late teens, only around 30% have a sustained undetectable viral load. Between the ages of 20 and 23, somewhere between 50 and 60% are undetectable. The proportion steadily rises, until it reaches 100% at the age of 28, where it remains.

Returning to the St Mary’s cohort, although the majority have good outcomes, a significant minority do have difficulties. Twenty per cent currently have a detectable viral load and 11% a CD4 cell count below 200 cells/mm3. Many have had complex treatment histories, including previous use of suboptimal regimens, resulting in resistance to multiple drug classes and treatment side-effects. Six have had surgery for lipodystrophy.

Spending or having previously spent time with uncontrolled HIV does create serious health issues for some young people. Nine per cent (14 of 158) have had an AIDS-defining illness while in adult care, including HIV-associated wasting, sepsis and opportunistic infections. The incidence of cancer (especially the blood cancers Hodgkin’s lymphoma and non-Hodgkin’s lymphoma) is far greater than seen in young people in the general population. Most of those who develop cancers have had a long history of poor adherence to HIV treatment.

Mental health difficulties are also frequent – 33 have depression and/or anxiety, eight have psychosis, six have drug or alcohol dependency and four have learning disabilities. However, this appears to be linked to the challenging social circumstances in which some of these young people grow up, rather than specifically related to having HIV themselves. The AALPHI study compared these issues in adolescents born with HIV and in adolescents who had HIV-positive family members but did not have HIV themselves, and did not find significant differences between the two groups.

More encouragingly, 16 patients are now parents to a total of 25 children, none of whom have HIV.

Given the challenges of growing up with HIV and the mental health issues just mentioned, it might be assumed that young people living with HIV experience more stigma and self-stigma than older adults living with HIV. This is not necessarily the case.

The People Living with HIV Stigma Surveys UK compared the results of its main survey, which recruited 1450 adults aged 18 years and older, with those of an additional young people’s survey. The latter recruited 300 people living with HIV, aged 15-24, including 29% who had acquired HIV sexually rather than at birth. Participants for both were recruited through HIV clinics and community organisations.

Unsurprisingly, the young people’s survey includes more black African participants, fewer men who have sex with men, and more participants who are not sexually active than the main survey.

Four questions were asked about positive feelings in relation to having HIV: being in control of your health, feeling as good as anyone else, feeling positive about the future and feeling positive about life. For each one around 60% of people in the main survey reported positive feelings, in comparison with over 80% of people in the young people’s survey. In each case, the difference was statistically significant.

Five questions were asked about negative feelings in relation to having HIV: shame, guilt, blaming yourself, blaming others and low self-esteem. Similarly, young people were less likely to report negative feelings (especially the first three issues), with these differences also being statistically significant.

These findings appear to concur with those of Positive Voices which, as we have already reported, found that respondents who were born with HIV had better quality of life than other people living with HIV. Those born with HIV were the only group to have scores comparable to those in the general population.

Lut I et al. Stigma Survey UK: an intergenerational comparison of stigma and discrimination in non-HIV healthcare settings across the UK. Abstract P127.

Researchers Use TikTok To Explain And Spread HIV Awareness

Social media has become a new platform for the public to learn more and understand HIV, thanks to a Knowledge Translation project.
Star Observer
5 Sep 22
PrEP

Why are some young women at risk of HIV saying no to PrEP?

Caregivers of adolescents with perinatally acquired HIV are at high risk of depression. This is according to a study by mental health experts at the University of Cape Town.
News 24
18 Aug 22
Child developmental issues